The two brothers had fought a bitter public battle after his father Dhirubhai died without leaving a will. They split his businesses between themselves, with Anil getting telecom and power while Mukesh retained oil and petrochemical businesses. 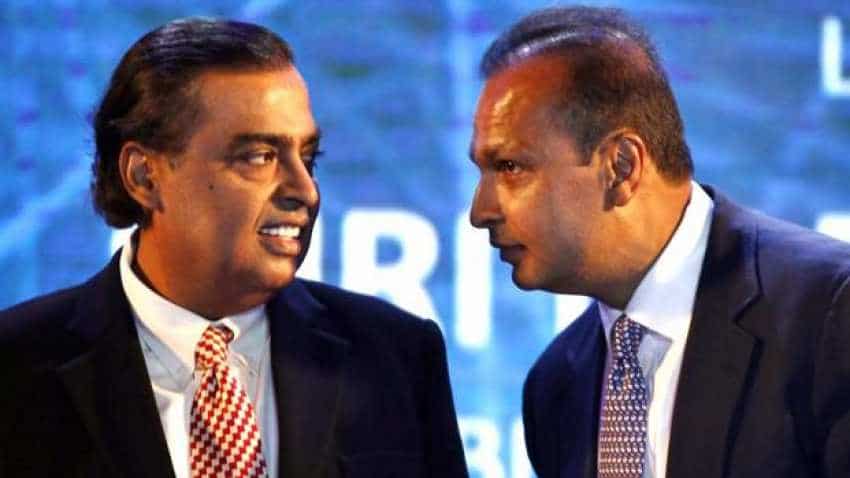 Anil said he and his family "are grateful" and "deeply touched with this gesture" that they "have moved beyond the past". Image source: Reuters

Embattled billionaire Anil Ambani Monday warded off a possible jail term as RCom cleared dues of a Swedish service provider at the eleventh hour with money received from elder brother Mukesh, whom he thanked for standing by him in trying times and extending "timely support". Anil's heavily debt-laden Reliance Communications made a Rs 550 crore payment, including interest, to Ericsson just a day before expiry of the deadline set by the Supreme Court to clear dues or face a three-month jail term.

Soon after making the payment, RCom announced termination of a Rs 17,000 crore deal to sell telecom assets like spectrum, fibre and tower to Mukesh's Reliance Jio, citing delays in approvals from the government and lenders.

Anil, whose businesses in telecom and power sectors went into heavy debt in the face of regulatory headwinds and intense competition, thanked Mukesh and his wife Nita for bailing him out.

"My sincere and heartfelt thanks to my respected elder brother, Mukesh, and Nita, for standing by me during these trying times, and demonstrating the importance of staying true to our strong family values by extending this timely support," a late night statement issued by Anil's firm quoted him as saying.

Anil said he and his family "are grateful" and "deeply touched with this gesture" that they "have moved beyond the past".

In the statement, RCom said Rs 550 crore dues to Ericsson, including interest dues, has been made in compliance with the Supreme Court judgement.

However, the company did not give details about the source of funds but cited "timely support" from Mukesh in the trying times.

The two brothers had fought a bitter public battle after his father Dhirubhai died without leaving a will. They split his businesses between themselves, with Anil getting telecom and power while Mukesh retained oil and petrochemical businesses.

The split did not end the feud and the two bickered over commitment of Mukesh' Reliance Industries for supply of gas to Anil's power plants. In 2008, Anil's RCom wanted to merge with South Africa's MTN but the move was thwarted by Mukesh citing his holding right of first refusal.

Since then, the two brothers scrapped a no-compete agreement and Mukesh re-entered telecom business in 2016 offering free voice call for life and data at dirt cheap prices.

As debt grew, RCom, in December 2017, entered into a deal with Jio to sell spectrum and other assets such as fibre network and telecom towers for an estimated Rs 17,000 crore.

But the deal could not progress amid regulatory hurdles faced as the Department of Telecommunications wanted a written assurance on who would pay for RCom's dues such as spectrum fee.

Jio refused to make a commitment to pay for such fee and lenders to RCom also played hardball, resulting in the deal falling through.

In separate statements, RCom and Jio announced scrapping of the deal, citing delays in getting approvals from the government and lenders.

"The said transactions have become incapable of being consummated in accordance with the terms thereof, on account of various factors and developments since the execution of the said agreements nearly 15 months ago...," RCom said.

This, it said, also follows the Board of Directors of RCom passing a resolution to seek fast track resolution through bankruptcy court and the National Company Law Appellate Tribunal (NCLAT) on February 4 restricting the sale, transfer or alienation of any movable or immovable property of RCom.

"The termination of the master agreement shall not, in any manner, affect the rights and obligations of the parties, accrued prior to the date of termination," it said.

An Ericsson spokesperson confirmed that it has received balance payment of Rs 458.77 crore (principal amount) from RCom on Monday. Together with Rs 118 crore it had previously paid, RCom has cleared all dues including interest.

Last month, the Supreme Court held Ambani in contempt for not paying Ericsson's dues despite promising to do so. The court had warned to send Anil as well as Chhaya Virani and Satish Seth - chairmen of two RCom units -- to jail if they fail to pay the dues in four weeks. The deadline expires Tuesday.