The airline has introduced ‘Vistara Freedom Fares’ – a menu-based pricing model to empower customers with the freedom to choose the kind of fare and services that suit them best, giving them the freedom to plan their journeys, their way. 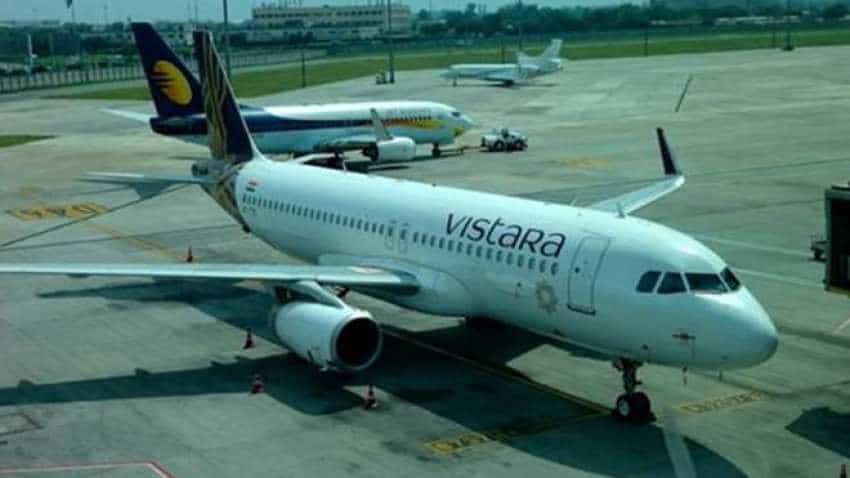 The Tata-Singapore Airlines venture in India, Vistara, which commenced operations as a premium full-service airline, which in effect translates into high ticket prices and top service, is toying with a new course for the brand. Image source:
Written By: ZeeBiz WebTeam
RELATED NEWS

Pads on board! Vistara to provide sanitary napkins onboard domestic flights starting this International Women’s Day

The Tata-Singapore Airlines venture in India, Vistara, which commenced operations as a premium full-service airline, which in effect translates into high ticket prices and top service, is toying with a new course for the brand. While it is no U-turn, Vistara has made a bid to enter the country’s affordable airlines market where dogfights among the other airlines is fierce indeed. The move comes just before Vistara’s international debut and is also being seen as an attempt to consolidate its position at home before taking off to distant shores.

Vistara was launched as a full-service premium airline three years ago amid much fanfare promising fliers a new, rich and premium experience on its flights. This, of course, came at a price, which is a market that is limited in size. Therefore, the airline has now introduced a premium economy and economy seats, in effect targetting mass scale.

The airline has introduced ‘Vistara Freedom Fares’ – a menu-based pricing model to empower customers with the freedom to choose the kind of fare and services that suit them best, giving them the freedom to plan their journeys, their way.

Effective from August 2, travellers have been given the freedom to choose from thoughtfully designed bundles of features and services at different price points for their preferred flight and class of service, not compromising on globally-praised service standards.

We know every traveller has different needs. Presenting #VistaraFreedomFares that gives you the freedom to choose the kind of fare that suits your needs best, from 9 fare types across all classes. So you get the freedom to fly the way you want! Know more: https://t.co/6q7ezrTo8C pic.twitter.com/McOzMjTbT5

According to Vistara statement, introduction of ‘Vistara Freedom Fares’ is based on a comprehensive customer research and feedback, which helped the airline observe the need to offer services on a pay-for-what-you-value basis, given the changing preferences of new-age travellers.

Vistara is the first full-service carrier in India to introduce the customer-centric model and redefine full-service flying, it said, adding that ‘Vistara World’ will be rolled out fleet-wide in August 2018, subject to regulatory approvals.

It will also offer a content-rich multimedia library that includes music in genres like Pop, Jazz, Blues, Rock, Electronica, English Retro and Indian, Bollywood and Hollywood movies of various categories such as Drama, Romance, Comedy, Thriller, Action, Adventure, etc., Indian and International short programs as well as a variety of reading material including Vistara’s inflight magazine.

Explaining the rationale behind these steps, Leslie Thng, Chief Executive Officer, Vistara, said, “Consumers today have a vast range of options and the one-size-fits-all approach is increasingly becoming redundant. It is the age of flexibility; of deciding for yourself; of doing things at your own terms."

"We observed this consumer behaviour over a period of time and are delighted to bring ‘Vistara Freedom Fares’ to the discerning travellers, while also further enhancing our product and service portfolio with ‘Vistara World’. Our success thus far has been possible by challenging the status quo and by being nimble as an organisation which, we are confident, will take us a long way,” he added

First peek at #VistaraFreedomFares Economy Lite, Standard, and Flexi fares and the differences in price & value between them. You want free change and cancel? It is now affordable! And so much more! Fares being loaded through the night. pic.twitter.com/dHynQmh6bx

‘Lite’ fares will be available in Economy Class only, and is a new category of fares for customers seeking simply the lowest fares, that does not include complimentary meals. However, a buy-on-board option of snacks and drinks will be available.

While ‘Economy Lite’ customers will continue to earn Club Vistara points, they will not earn elite-qualification ‘tier points’. ‘Economy Lite’ fares are not upgradeable, non-changeable and non-refundable (though taxes are always fully refundable). The free checked baggage allowance remains at 15kg, but is restricted to one piece of checked baggage only, the airline said.

Pads on board! Vistara to provide sanitary napkins onboard domestic flights starting this International Women’s Day