In his recent meet with Indian prime minister Narendra Modi, Apple CEO Tim Cook has said that his company is positive about the production of iPhone SE in Bengaluru and added further that App developers in India have created close to 100,000 apps for the App Store. 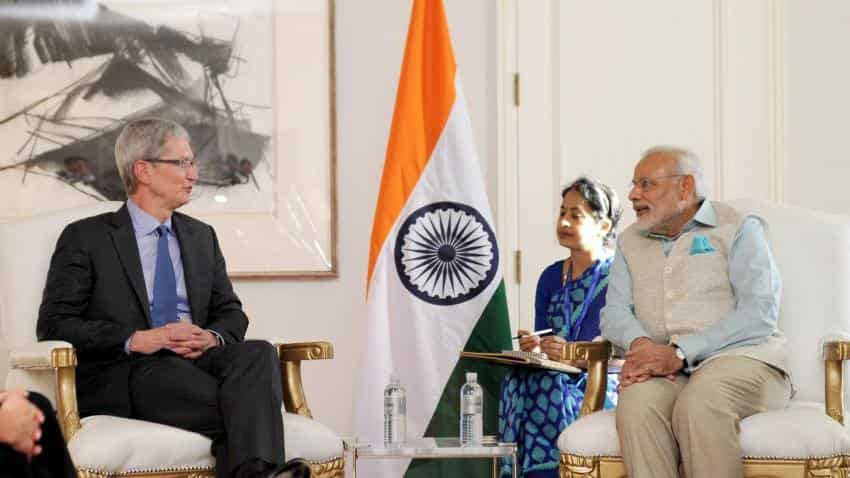 Apple CEO Tim Cook is reported to have told Prime Minister Narendra Modi that his company is positive about the production of the iPhone SE in Bengaluru.

Cook was among the 21 US corporate leaders who met Modi in Washington on Sunday.

According to industry sources, Cook apprised the Prime Minister about the production of Apple`s popular iPhone SE model at its Bengaluru facility and the app developers working for Apple.

In May, Apple began the initial production of a small number of iPhone SE in Bengaluru, where it had opened its App Accelerator to provide specialised support for developers earlier this year in March.

"iPhone SE is the most popular and powerful phone with a four-inch display in the world and we`ll begin shipping to domestic customers this month," Apple had told IANS in an email earlier this year.

IANS also learnt that to begin with, it will be a trial run with small quantities of iPhone SE units being assembled at the facility.

The industry sources also revealed a photograph of the SE device being assembled in India which Apple began with Wistron Corporation, its Taiwanese manufacturing partner.

As far as app developers are concerned, India now accounts for at least 740,000 app economy jobs attributable to iOS.

App developers in India have created close to 100,000 apps for the App Store -- a growth of 57% in 2016. Sources said that Apple has already trained thousands of iOS developers in its accelerator in Bengaluru.

Earlier this year, an Apple India spokesperson told IANS that developers from India are now creating amazing apps for its platform.

"There are several app developers from India who are now part of the growing innovative community globally," the spokesperson had told IANS.

On June 1, Philip Schiller, Apple`s Senior Vice President of Worldwide Marketing said the global developer community, including many from India, has earned over $70 billion since the App Store`s launch in 2008.

"$70 billion earned by developers is simply mind blowing. We are amazed at all of the great new apps our developers create and can`t wait to see them again next week at our Worldwide Developers` Conference," Schiller said in a statement.

The Cupertino-headquartered tech giant is expected to run its India business fully on renewable energy by the end of this year, sources revealed.

Interacted with top CEOs. We held extensive discussions on opportunities in India. pic.twitter.com/BwjdFM1DaZ