By acquiring Opel, PSA Group which owns Peugeot, Citroen and DS cars will leapfrog to become the second largest carmaker in Europe after Volkswagen. 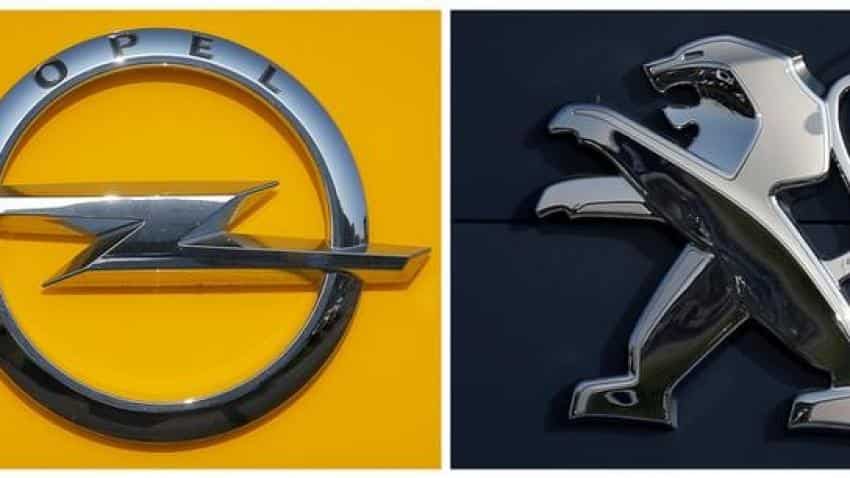 A combination picture shows the logos of Opel and Peugeot car manufacturers at dealerships of the brands in Strasbourg. Photo: Reuters
Written By: Reuters
RELATED NEWS

France's PSA Group is set to announce a deal to buy Opel from General Motors on Monday after striking an agreement with the US carmaker and winning the blessing of its board for the acquisition. The maker of Peugeot, Citroen and DS cars said on Saturday it would hold an early Monday press conference with GM, at which the transaction is expected to be presented after Reuters reported that a deal had been struck between the two automakers.

The tie-up was approved on Friday by the PSA supervisory board, on which the French government, Peugeot family and China's Dongfeng are represented as shareholders, one source with knowledge of the matter said. Spokespeople for PSA and Opel declined further comment.

The two carmakers, which already share some production in an existing European alliance, confirmed last month they were negotiating an outright acquisition of Opel and its British Vauxhall brand by Paris-based PSA, sparking widespread concern over possible job cuts.

In their jointly issued invitation to a Paris press conference at 0815 GMT on Monday, PSA and GM gave no indication of its subject. Separate briefings for the German press and Opel unions are expected to be held the same day.

Sources close to the talks had reported progress on Thursday after the carmakers narrowed differences on a near-$10 billion Opel pension deficit and other issues.

GM's European arm recently posted a 16th consecutive year of losses. The negotiations had encountered problems over GM demands that a PSA-owned Opel be barred from competing against its own Chevrolet lineup in markets including China, they said. But the "non-compete" issues were finally resolved as GM agreed to inject "substantially more" into the pensions than the $1 billion to $2 billion it had initially offered, another person said.

The sources declined to give further details. Detroit-based GM, which came close to selling Opel to Magna in 2009, has faced investor pressure to offload its struggling European arm and focus on raising profitability rather than chase the global sales crown currently held by VW.

After fending off 2015 merger overtures by Fiat Chrysler with support from her board, GM Chief Executive Mary Barra agreed to target a 20% minimum return on invested capital and pay out more cash to shareholders.

For PSA, the Opel deal caps a stellar two-year recovery under cost-cutting CEO Carlos Tavares, who said on February 23 he would apply the same methods to Opel if the deal went through. PSA averted bankruptcy by selling 14% stakes to France and Dongfeng in 2014, to match a diluted Peugeot family holding.

The acquisition offered an "opportunity to create a European car champion" and quickly exceed 5 million annual vehicle sales, Tavares told analysts as he presented full-year earnings. PSA also expects savings of up to 2 billion euros ($2.1 billion) from the tie-up, sources have said. Tavares also told his board that PSA would redevelop the Opel lineup with its own technologies to achieve rapid savings, according to people with knowledge of the matter.