The five year deal for the sponsorship rights of the Indian Cricket team will commence from April 2017. 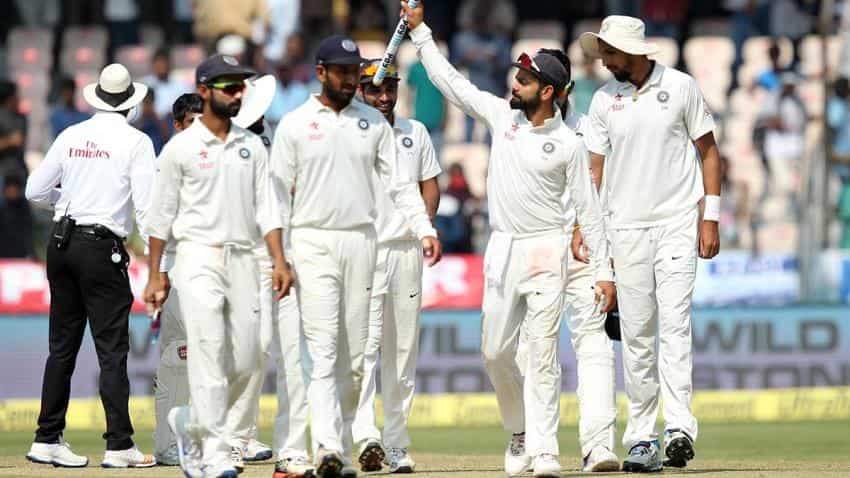 Virat Kohli with the Indian Cricket team holding up a wicket after a victory of a test match. Photo: BCCI
Written By: ZeeBiz WebTeam
RELATED NEWS

The Board of Control for Cricket in India (BCCI) on Tuesday announced Chinese-based smartphone manufacturer Oppo Mobiles as a new sponsor of the Indian Cricket team. Oppo Mobiles won the Team India sponsorship rights are for a period of five years and have been acquired at Rs 1,079.29 crore.

The bids were opened on Tuesday in the presence of a CoA representative – Diana Edulji, BCCI officials and the bidders through a tender process today, at the BCCI headquarters in Mumbai, BCCI said in a press release.

The five years rights period starts on 1st April 2017 and continues until 31st March 2022. This period will see Team India play 14 home series and 20 overseas series, this would also include the ICC Champions Trophy, ICC Cricket World Cup and the World T20 events.

Rahul Johri – CEO, BCCI said, “On behalf of the BCCI, I would like to congratulate OPPO Mobiles India Pvt Ltd., on winning the rights and welcome them to the BCCI family. OPPO today, joins our other prominent sponsors like PayTM, PepsiCo, Hyundai and Janalakshmi Financial Services. OPPO Mobiles and the BCCI share a common vision and I am confident that we will work together to further grow Indian cricket.”

Sky Lee, Global VP & President of OPPO Mobiles India Pvt Ltd., said, “Cricket in India isn’t just a sport, it is also a way of life, a culture, even a religion. OPPO is the most adorable youth centralized brand, we aim at reaching new heights alongside the Indian Cricket Team. Indeed as a smartphone brand OPPO has become a favorite brand among young people, today more than 100 million young people across the world are using OPPO camera phones. In India we also have been growing fast. According to GFK data, in terms of sales units, we grew from 1.2% in December 2015 to 11.7% in January 2017, and deeply loved by Indian youngsters as well.”

This means that Oppo Mobiles will replace Star India, which is currently the Indian Cricket team's main sponsor. The media company decided not to bid for the renewal of the contract in April 2017 citing lack of clarity after the recent turmoil in the Indian cricket board, according to media reports.

Star India's is estimated to have paid Rs 1.92 crore per match for the bilateral series and Rs 61 lakh per match for ICC sponsored tournaments. They had won the rights in 2013 after Sahara's bid was found to be ineligible by BCCI.