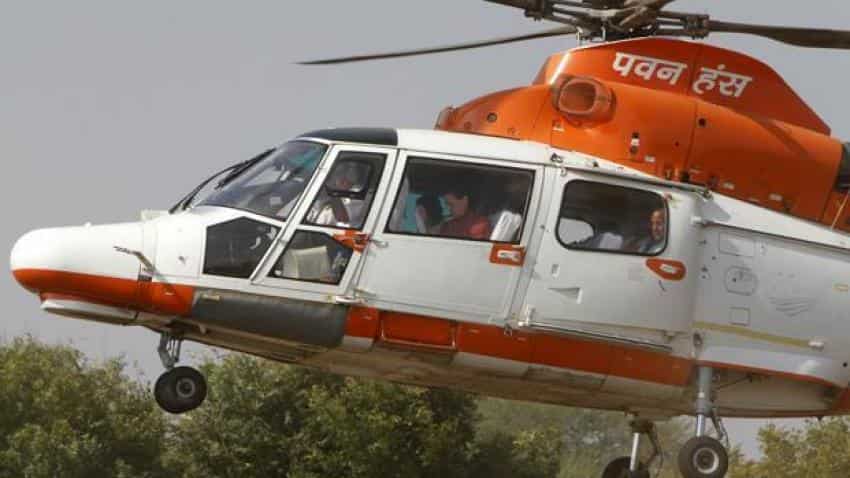 ONGC has engaged an expert team to carry out a thorough audit of all helicopter operations of the company. Image source: Reuters
Written By: PTI
RELATED NEWS

After losing key executives in a helicopter crash, state-owned Oil and Natural Gas Corp (ONGC) is veering around the idea of barring senior management from flying together in the same chopper. The company lost five key operational personnel when a Pawan Hans helicopter crashed in the Arabian Sea in January.

"Lot of companies world over have a policy of not allowing more than two senior executives flying together. We are also thinking of putting the same policy in operation for our offshore operations," a senior ONGC executive said. When on January 13 a Dauphin N3 helicopter, operated by Pawan Hans, crashed off the Mumbai coast, ONGC lost topline operational in-charges of its key Mumbai High oil and gas fields. Two pilots ferrying them to an offshore oil and gas facility were also killed in the accident, the cause of which is still being investigated.

"We lost installation/location managers and maintenance in-charges of Mumbai High North, NQ and Water Injection North (WIN) platforms in the accident," he said adding a sixth key operational executive had dropped out of the ill-fated flight at the last moment due to ill health. Any oil and gas field of ONGC is headed by the asset manager and installation or location managers are just below him.

The official said a decision on barring key executives from flying together is likely to be taken soon. ONGC, he said, has engaged an expert team from the Rotary Wing Society of India (RWSI) to carry out a thorough audit of all helicopter operations of the company and submit a report on maintenance practices, operational procedures and safety issues. RWSI is a not-for-profit professional body specialising in both civil and military helicopters. It is an affiliate of Helicopter Association International (HAI) and headed by Air Vice Marshall K Sridharan.

"While the Directorate General of Civil Aviation (DGCA) is probing the reasons for the accident, we wanted to ascertain if the talks of poor maintenance at Pawan Hans could be a factor," the official said. The RWSI report is expected later this month. Improper maintenance, non-adherence to procedures, non-compliance of safety regulations by the operator are some of the common findings in probe reports prepared by the DGCA into 20 of 25 accidents involving Pawan Hans helicopters over the last 30 years. Since 1988, 91 people have been killed in these accidents, including 60 passengers, 27 pilots and four crew.

The Dauphin is a medium weight multi-purpose twin-engine helicopter. "We don't know the reasons for the accident yet. Only after competent authorities examine the black block (flight and cockpit voice recorder) can we know the reasons. We haven't been told anything about the reasons by the aviation authorities so far," the official said.

Both engines of the helicopter were found to be intact, ruling out the possibility of a mid-air explosion. Pawan Hans operates seven Dauphin N3 Helicopters for ONGC's offshore operations. These helicopters, based at Juhu airport, Mumbai and Rajahmundry, undertake passenger crew change service and production trips on a regular basis to meet the offshore requirements of the state-owned oil and gas producer.

Pawan Hans is a joint venture between the government of India owning 51 per cent stake, and ONGC which holds the remaining 49 per cent interest. As of January 2017, Pawan Hans has a fleet of 46 helicopters. It was incorporated to provide helicopter support services to the oil sector, services in remote and hilly areas, as well as, for charter services. In 2015, a Pawan Hans chopper had crashed off Mumbai High, the country's largest offshore oilfield 176 kilometres off the Mumbai coast. The helicopter, which was conducting night landing practice, was carrying two pilots. Only one body was found.