India's biggest oil and gas producer ONGC may buy all of the government's 51.11% stake in Hindustan Petroleum Corporation Ltd (HPCL). 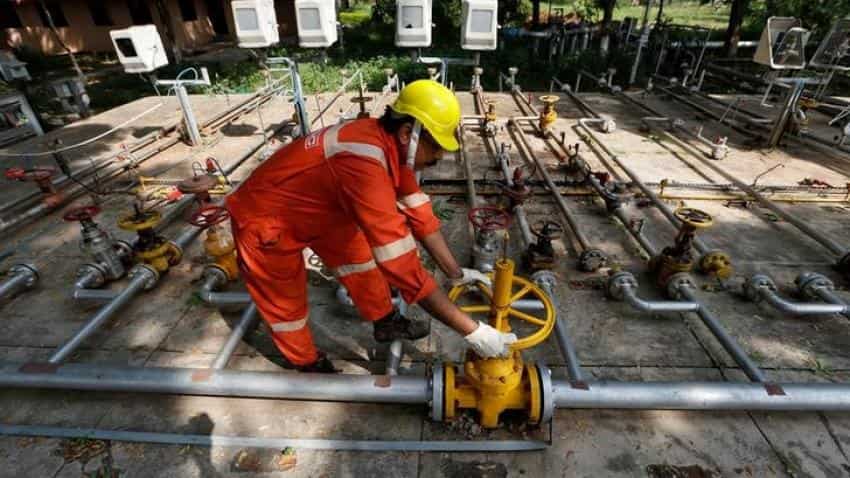 A technician works inside the Oil and Natural Gas Corp (ONGC) group gathering station on the outskirts of Ahmedabad. Photo: Reuters
Written By: PTI
RELATED NEWS

State-owned Oil and Natural Gas Corporation (ONGC) may acquire India's third-biggest fuel retailer HPCL in an about Rs 44,000 crore ($6.6 billion) deal as part of the government's plan to create an integrated oil giant.

This will have to be followed by an open offer to acquire additional 26% from other shareholders of HPCL.

"The government is looking at creating an integrated oil company and the idea is to merge an oil producer with a refiner," a top source said.

There are only six major companies in the sector - ONGC and Oil India Ltd being the oil producers, Indian Oil Corp (IOC), HPCL and Bharat Petroleum Corp Ltd (BPCL) in refinery business and GAIL in midstream gas transportation business.

The rest such as ONGC Videsh, Chennai Petroleum Corp (CPCL), Numaligarh Refinery Ltd and Mangalore Refinery (MRPL) are already subsidiaries of one of these six PSUs.

"So, the options are very limited. One option is to merge refiners HPCL and BPCL with ONGC and merge IOC and OIL. Now this would create two large vertically integrated oil companies. But this would also mean limiting the choice for consumers to just two companies for buying fuel," he said.

The possible way out is to merge HPCL with ONGC while keeping BPCL separate. BPCL already has a flourishing upstream arm in Bharat PetroResources Ltd which can be strengthened further.

"This way consumers will continue to have three fuel retailers in IOC, ONGC-HPCL combine and BPCL," he said.

ONGC already is majority owner of MRPL, which has a 15-mt refinery.

The source said ONGC buying HPCL will require two sets of Cabinet approval - one where the government approves sale of its all or part of its 51.11 per cent stake to ONGC, and the other for allowing ONGC to spend the money on stake buy.

More than 12 years after a proposal to merge oil PSUs was first mooted by the then oil minister Mani Shankar Aiyar, Jaitley in his Budget for 2017-18 proposed to "create an integrated public sector 'oil major' which will be able to match the performance of international and domestic private sector oil and gas companies".

The behemoth so created will not just compete globally, but withstand oil price volatility by using profits the refining business make in low oil prices to make up for losses in upstream and vice versa.

"We seek opportunities to strengthen our central public sector enterprises through consolidation, mergers and acquisitions," Jaitley had told the Lok Sabha on February 1 while presenting the Budget for the year beginning April 1.

"It will give them the capacity to bear high risk, avail economies of scale, take higher investment decision and create more value for stakeholders."

Aiyar had first mooted merger of HPCL and BPCL with ONGC and OIL with IOC to create two oil giants having interests across the energy chain in 2004.

However, in September 2015, a high-level panel on recast of public sector oil firms did not favour mergers to create behemoths and instead suggested greater autonomy by transferring government shareholding in oil PSUs to a professionally-managed trust.

The Advisory Committee on Synergy in Energy headed by V Krishnamurthy was of the view that mergers and consolidations worldwide occurred during times of low oil prices and were instruments of eliminating excess workforce and duplicate facilities.

That was the time when oil price was on the rise, but it has in the past two years slumped to multi-year lows.

Aiyar was also keen on subsidiaries of oil PSUs to be merged with the parent firm - like merger of Kochi refinery with BPCL and Chennai refinery with IOC.