A merger of two of the world's top five candy makers would add Hershey's strong US business to Mondelez's global footprint. 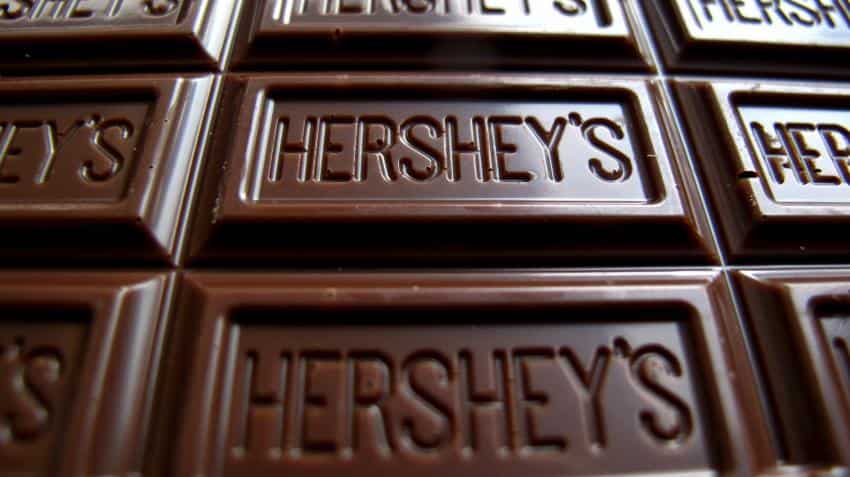 A Hersheys chocolate bar is shown in this photo illustration in Encinitas, California, US. Photo: Reuters/Mike Blake
Written By: Reuters
RELATED NEWS

Hershey Co said on Thursday it had rejected a $23 billion (approximately Rs 1.53 lakh crore) takeover bid by Mondelez International Inc that would seek to expand the latter's limited US footprint and create the world's largest confectioner.

The maker of Hershey's Kisses and Reese's Peanut Butter Cups saw its shares trade above Mondelez's bid of $107 per share in cash and stock, indicating investors expected a new offer.

A merger of two of the world's top five candy makers would add Hershey's strong US business to Mondelez's global footprint.

Earlier, a source said that Mondelez had sought to provide assurances to Hershey that it would keep its name and preserve jobs. Mondelez sees little antitrust risk given the limited geographic overlap of the two companies' businesses, the source added.

"The board of directors of the company unanimously rejected the indication of interest and determined that it provided no basis for further discussion between Mondelez and the company," Hershey said in a statement.

Mondelez, the maker of Oreos cookies, is the second-largest confectionary company globally, while Hershey ranks number five. Their merger would put them in the top place at 18 percent of the market, according to market research firm Euromonitor International Ltd. The combined company would leapfrog Mars Inc, which has 13.3% of the global market.

A fusion of the two would give Mondelez control over the production and distribution of Cadbury brand chocolates in the United States, which Hershey currently holds the license to produce, paying royalties to Mondelez.

It would also give Mondelez the US production and distribution rights for Kit Kat, one of the most popular chocolate brands in the world, which industry sources said would be a significant boost to Mondelez.

Nestle SA manufactures Kit Kat worldwide, but Hershey has the rights in the United States, paying Nestle royalties from sales. Mondelez`s bid could put pressure on Nestle to consider its own bid for Hershey.
Upon change of control at Hershey, the license would revert back to Nestle for free, depriving value for a potential acquirer.

Hershey trust trouble
The bid pits Deerfield, Illinois-based Mondelez against the Hershey Trust, one of Pennsylvania's wealthiest charities. The trust has about 81% of Hershey`s voting rights and in 2002 prevented the Hershey, Pennsylvania-based company from being acquired by Wm. Wrigley Jr. Co for $12 billion.

Created by Hershey founder Milton Hershey to provide for the Milton Hershey School, a private school for children from low-income families, the trust has been the subject of an investigation recently by Pennsylvania's attorney general over conflicts of interest and mismanagement.

The trust`s chief compliance officer was put on leave last month after a leaked memo showed the board had spent nearly $4 million investigating conflicts of interest and insider-trading accusations against board members. A top trust official was also sacked in May and pled guilty to wire fraud.

Starting point
Tigress Financial Partners LLC analyst Philip Van Deusen said he expected the offer price to increase, given the rise in Hershey's shares. "I think ($107) is a good starting place," he said.

Analysts have been skeptical of takeover bids for Hershey in the past. "The Trust ... is outwardly very committed to keeping the company independent," Bernstein analyst Alexia Howard said in June last year.

"So it's pretty much impossible for an activist to get involved or for the company to be bought."

Last year, William Ackman revealed his activist hedge fund Pershing Square had built a stake worth about $5.5 billion in Mondelez, in what was seen as an attempt to push the company to boost earnings or sell itself.