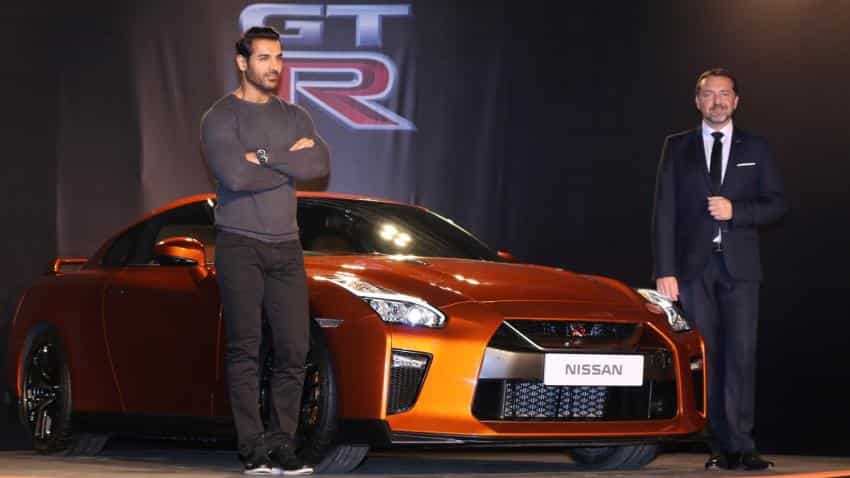 Actor and brand ambassador of Nisaan John Abraham during the launch of 2017 Nissan GT-R in Mumbai on December 2, 2016. Image Source: IANS

"Nissan India is progressing towards our aim of becoming a major force within India with a 5% share by 2020. We currently have approximately 2% market share," Guillaume Sicard, President, Nissan India Operations said.

"We announced our intention to introduce up to eight new cars from the Datsun and Nissan brands in India by 2021. We are here for long-term. New products will support our goal of achieving 5% market share... and show our level of commitment to this market," Sicard told IANS.

Looking back at 2016, he said in the first half of FY16, Nissan and Datsun combined sales, were up 48% compared to the same period in FY15.

"We are the second-fastest growing brand in percentage terms this year, ahead of many well-established original equipment manufacturers (OEMs) that have been active much longer than we have in this market. We are seeing a definite upward trend for us in 2017," Sicard added.

According to him, Nissan India had its own share of success in the entry segment in 2016 with the Datsun redi-GO.

Datsun redi-GO has taken brand awareness for Datsun in India to the next level. Our marketing outreach across platforms -- traditional print/advertising or through digital channels-- has helped us increase the brand`s awareness among prospective customers," he said.

We also launched a limited edition of the redi-GO, called the redi-GO SPORT, in September 2016.

He said the popularity of redi-GO SPORT variant has exceeded the expectations generating more orders than expected.

"The first batch of 1,000 units sold out in less than a month so we decided to increase production of the car with a further 800 units," Sicard said.

In 2017, Nissan India will launched X-Trail, a hybrid sports utility vehicle (SUV), the first of its kind in India.

Sicard declined to be drawn into discussion on whether there is a possibility of India increasing import duties to promote its policy on Make in India.

"Since beginning operations in India in 2010, Nissan has exported over 620,000 cars from the country, showcasing Indian build quality on the world stage.

"However, we are not going to speculate on hypotheticals or specific government macroeconomic policies," Sicard said.