Never saw such a huge & speedy investment in infrastructure in my career: Vinod Dasari, Ashok Leyland

Vinod K Dasari, MD and CEO, Ashok Leyland, talks about the latest order from STUs, a slowdown in CVs and expectations from the defence sector among others during an interview with Zee Business. 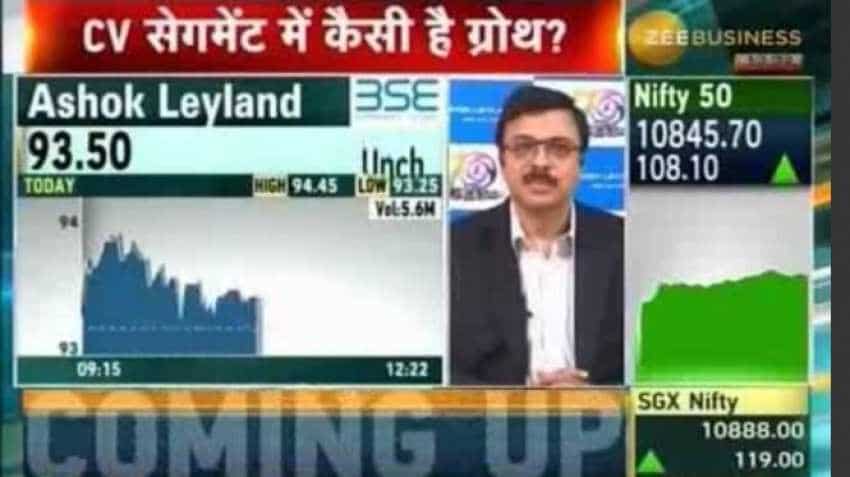 We have received orders of delivering 2,580 buses and it will be executed by end of the quarter, said Vinod K Dasari. Image source: Zee Business

Vinod K Dasari, MD and CEO, Ashok Leyland, talks about the latest order from STUs, a slowdown in CVs and expectations from the defence sector among others during an interview with Swati Khandelwal, Zee Business. Edited Excerpts:

Q: You have recently bagged an order for 2580 buses from three State Transport Units (STUs). By when the orders will be executed?
A: We have received orders of delivering 2,580 buses and it will be executed by end of the quarter.

Q: Commercial vehicles (CVs) has been in pain as there is a slowdown in the segment. How you will tackle with the slowdown? Did liquidity issue had an impact on this slowdown, if yes, let us know about its quantum?
A: The medium and heavy commercial vehicles (CVs) segment has witnessed a growth of 25 per cent between April-December 2018 when compared to the same period of the past year. Similarly, if we compare December’s growth with November’s growth then the segment has grown by 25 per cent.

Apart from this, the pre-buy in last year’s December, prior to the introduction of new regulation on blower and air-conditioners, which was scheduled to be introduced in January 2018, led to a heavy sale of the vehicles. In such a case, when you will find a decline of 20 per cent in sales if you go ahead and compare December 2018 sales with December 2017, which grew due to a onetime event. But, you can get growth of 25 per cent by comparing December’s story with November’s story or April to December story of this year with same period of last year. I hope that certain growth will be visible in the fourth quarter. We will report growth of 15-20 per cent for the year even if nothing crops up in the last quarter.

Q: Talk about your expectations on revenue from the defence sector, where your revenues have doubled in a short period? How do you see the growth in the defence vertical in the next 5 years and its contribution to overall P&L?
A: We have a simple strategy on defence and that is to provide everything connected to mobility to the security forces as we have been the world’s largest logistic vehicle manufacturer. Now, we have decided to go beyond and manufacture almost everything connected to mobility that is essential for the forces like guns, ammunition, radar, tanks and missiles. That’s why we are designing armoured vehicles and mine protected vehicles in all ranges from 4x4 to 12x12. Proudly, I can say that we have won 38 tenders in the last two and a half year. In fact, production has been started on a few of them and waiting for government’s order on other tenders, which will be placed after enough funds are available with the government to place the order. When summed together, it turns up to be an order of about Rs5,000 crores.

Q: Let’s talk about the CapEx. How is the current trend of government and private CapEx?
A: See, I haven’t seen such huge infrastructural spending and speed of spending by a government in my career. In fact, Tipper demand is increasing at a rate of 50-60 per cent every year and this means that people have work. These construction contracts are not going to die in a period of 6months or so and will last for a long period of at least 3-6 years. Interestingly, construction has a contributes of 40-45 per cent to our business and such longevity of the projects will create stability in the company.

When it comes to private investment than we are investing a lot majorly towards BSVI, modular vehicles that will be launched in April 2020 and electric vehicles that will be launched in January 2019 in Ahmedabad at Vibrant Gujarat Summit. Apart from this, we are investing a lot in R&D and have started investing – about Rs100-120 crore – in capacity with a hope that demands will go up in FY2019-20.

Q: Provide an outlook on margins of Ashok Leyland scope of its growth?
A: It decreases and increase but we don’t chase the market share as we are aware of the fact that we will not lose our market share. As previously, I have said that we, at Ashok Leyland, has the practice of protecting a double-digit margin and it will continue.

Q: Lastly, please sum up your journey – more than 14-year – at Ashok Leyland?
A: Professionally, it has been a fabulous journey. I have learnt a great deal from my predecessors and support from the board. I had an incredible team and have been able to take the company to great heights. So, I am happy, and it has been a fantastic professional journey. On a personal note, from the time, when I announced my resignation there has been an overwhelming outpouring of love and affection from employees, which is so heart-warming. You know that what life is all about it is a relationship that we built. I have spent half my career in Ashok Leyland, this is what I take away and I am so happy about it.