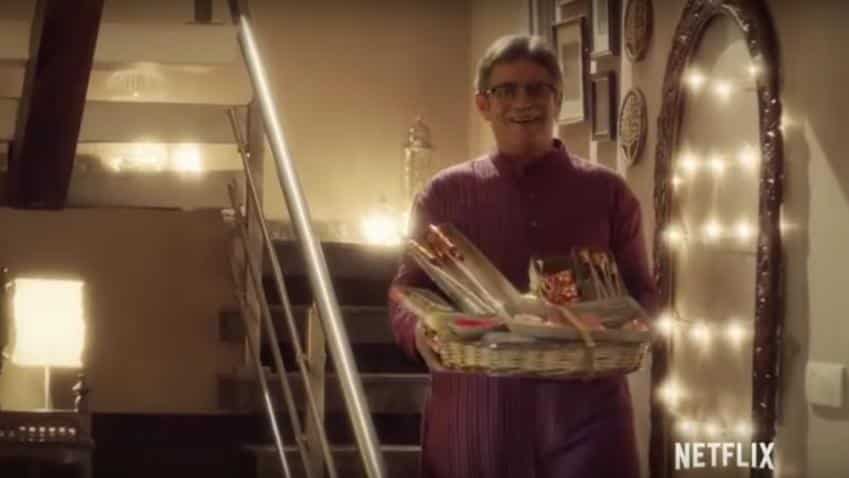 The spoof ad takes a dig at the cliched 'family-oriented' Indian festival ads that are churned out by brands every year, to ask viewers to subscribe to its ad-free content. Image Source: Youtube

After giving film makers, producers and directors sleepless nights with their unmatched original content, Netflix has now taken on ad makers in India, with their first Diwali advertisement.

The spoof ad takes a dig at the cliched 'family-oriented' Indian festival ads that are churned out by brands every year, to ask viewers to subscribe to its ad-free content.

The tvc features India's top Bollywood director and producer Anurag Kashyap, who has signed with Netflix for a original Hindi series Sacred Games, as the doting husband and father, along with other actors that make up the "typical happy family on Diwali”. The advertisement also features a character playing the grandfather who says he's acted in 137 such Diwali advertisements.

The advertisement is funny and uses a fresh take to get viewers to subscribe to Netflix India, for ad-free original content to avoid being subjected to repetitive, mundane advertising on the television.

The ad draws attention to the fact that most Diwali advertisements are so similar that we often fail to even differentiate one product from the other. From the slow motion effect to fake wide smiles, and children enthusiastically bursting crackers, to a husband gifting his wife expensive jewellery to the piano playing a melody in the background, the ad spoofs Diwali advertisements pretty well.

Netflix India tells the viewers at the end of the ad that "while Diwali ads may never change but your entertainment certainly can."

From chocolates to smartphones: How brands forged a shift in Diwali gifting

Shopkeepers gear up against E-commerce this Diwali

Receiving gifts this Diwali? Beware of the taxman