It cannot be ignored that Narayan Murthy is the co-founder and has had a great stake in building the enterprise -- though the action of making the grievance public seems to have had a counterproductive effect. 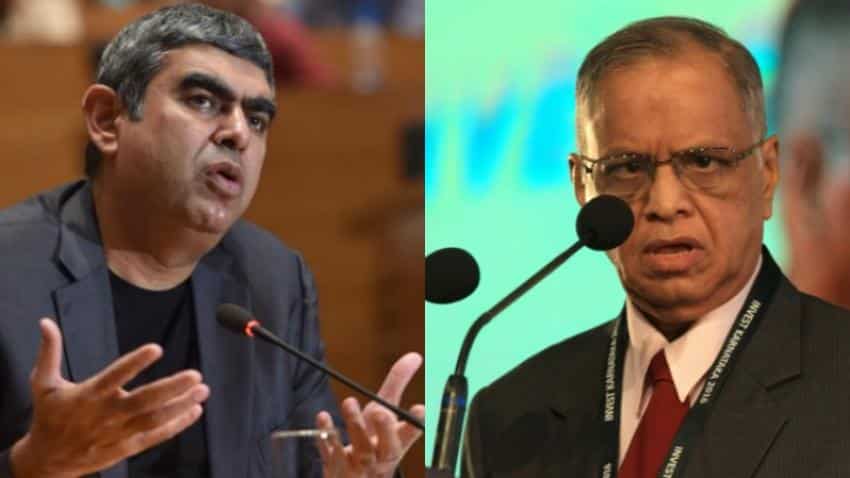 Vishal Sikkas exit from Infosys seems to have been accentuated by the streak of comments made by co-founder N.R. Narayan Murthy. The comments bordered on complaints, raising issues of corporate governance and at time accusations. The episode, like a soap opera with significant twists and turns, has been played in public glare over the last few months.

The resignation has had its first casualty by way of wiping off the value of Infosys stock on the bourses. The impact was close to Rs 22,000 for Infosys and Rs 700 crore of mark down for Murthy`s stock.

The episode rakes up significant issues about corporate governance and transparency, the agency problem (precisely the question of control between shareholders and professional management), important issues about the strategy of Infosys and the pressure to perform in a volatile global environment.

1. VUCA Environment. The pressure seems to have been built on the enterprise while operating in a Volatile, Uncertain, Complex and Ambiguous (VUCA) environment. Today`s business environment is bombarded with ideas countering the notion of globalisation and the negative impact of free trade. The benefits of globalization, driven by the free movement of goods, services, and information are countered by deeply seated myths and assumptions which smack right in the face of trade theorists. To top it all, the pressure has been further created by the current US administration`s views on outsourcing and immigration. To bluntly put it, the world is in the throes of economic nationalism.

2. Business Model. The archaic business model of Infosys, driven by the idea of scale and labor arbitrage has come under severe strain. The debate for years has been the innovative potential of Infosys and the value the enterprise can create. To put this into perspective, we must look at the trajectories of growth, impact the firm has had on the global industry et al. The enterprises to compare here are Microsoft and Infosys who effectively started at the same time and have had trajectories of growth that are significantly different.

I must as well admit that I have not been a great fan of Infosys of the past as it was built on the idea of exploitation of labor with abysmal levels of productivity numbers for its engineers. This is where the present team of Vishal Sikka, Ravi Venkatesan et al have been working quite hard and making admirable strides on redefining the business model. The effect of the new business model was as well visible through the rising productivity numbers of the enterprise and its talent.

3. Corporate Governance and Transparency. This issue needs to be assessed very carefully. It is clear that Murthy looks at Infosys having an impeccable record on governance and transparency. No one can find a reason to not follow the highest standards as espoused by Murthy. The practice needs to be followed to the hilt, though the issues need to be discussed within the confines of the boardroom. This discussion becomes important as Murthy cannot be seen as an activist shareholder who is at loggerheads with the management.

The episode leads us to look deeply at the issues of corporate control in the country. It is not the first time that we have had battles fought between shareholders and professional managers. The Infosys saga can as well be seen through the lens of conflict of interest and control.

To say the least, a conflict of this nature will not only undermine but has the potential to ruin the enterprise. It cannot be ignored that Murthy is the co-founder and has had a great stake in building the enterprise -- though the action of making the grievance public seems to have had a counterproductive effect.

The situation at hand demands an immense level of maturity by all parties involved. This would require all parties concerned to tone down the rhetoric, stand down from their respective positions and sit across the table to discuss the issues. If this is not done on an immediate basis, the loss would entirely be felt by Infosys, the poster boy of Indian IT Industry, that I am sure wouldn`t liked by Murhty, the board or Infosys stakeholders.

We must keep in mind that all organisations need to change, evolve their business model and adapt to the new realities. This will certainly have to be done while keeping in mind that the core of Infosys is kept intact which in itself seems to be jeopardised at the moment.