169 outlets of McDonald's in the North and East India could shut down as the fast food giant ends its joint venture partnership with CPRL. 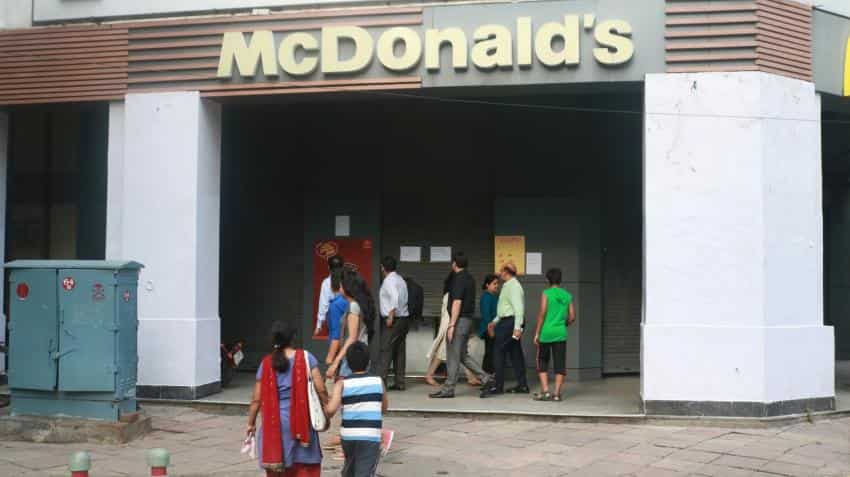 Over 40 McDonald's restaurants suspended their operations in the national capital due to expiry of Eating House Licenses; in New Delhi on June 29, 2017. Photo: IANS
Written By: ZeeBiz WebTeam
RELATED NEWS

US-based fast-food giant McDonald's on Tuesday terminated the franchise agreement with joint venture partner in North and East India Connaught Plaza Restaurants Ltd (CPRL). This decision puts into question the future of the 169 outlets in Northern and Eastern regions of India.

These outlets employ nearly 10,000 people directly or indirectly and with this decision brings about a level of uncertainty regarding their jobs. However, according to a Financial Express report a McDonald's spokesperson the company will mitigate the impact on the employees, suppliers and landlords of CPRL.

Bakshi, in a Financial Times news report said that McDonald's had known for years that the royalties were going unpaid without raising any objection. He further added that the company had been unable to pay the royalties because of falling sales, as well as demand by McDonald's that CPRL repay its bank debts rather than rolling over loan facilities.

So why has McDonald's raised an objection over unpaid royalties now and taken action against CPRL now?

This decision to end its ties with CRPL does not come out of the blue as the company has been at logger heads with its joint venture partner since 2013.

CPRL is 50:50 joint venture between Vikram Bakshi and McDonald's and has the franchise license for all the McDonald's outlets in North and East India. But McDonald's has been having a tough battle with Bakshi over him running the show as the Managing Director of the company.

However, there is more to the reason behind McDonald's terminating the franchise agreement with CPRL.

Just last month McDonald's had to shut 43 of its outlets in India over failure to renew their eating house licenses.

Bakshi refused to sign the licenses for the 43 outlets on concerns over the quality of food supplies, which was managed by a separate team in Mumbai and also supplies to Hardcastle Restaurants (McDonald's joint venture with Mumbai-based Westlife Development that operates its outlets in West and South India).

Bakshi told PTI that the licenses of these 43 outlets had expired on March 31 and were operating without a license for 3 months. He further said that the health license was necessary to be obtained from local municipal bodies to run the restaurants for water hygiene and proper maintenance of food, among others.

However, NCLT last month appointed a former Supreme Court judge Justice GS Singhvi as administrator on the board of CPRL to sort out issues, including the re-opening of 43 outlets whose operations had been suspended over the last 3 months.

Beyond this, there has been a power struggle between the US fast food company and Bakshi to control the company in India. McDonald's had even tried to buyout Bakshi's stake in 2014 and had offered around Rs 48-50 crore for it. But Bakshi asked McDonald's for Rs 1,800 crore for the stake, over 20 time more than what they offered, according to Business Standard report.

Currently, the board of CPRL consists of Vikram Bakshi and Madhurima Bakshi from CPRL and Robert Larson and Aysel Melbye, two directors from McDonald's India, apart from Justice Singhvi appointed recently by NCLT.

While the power struggle continues, analysts expect the fast food giant to partner with its other joint venture partner Hardcastle in the North and East.

Hardcastle Restaurants controls 260 McDonald's outlets in the South and West India. It has even made a net profit of Rs 23 lakh in the June quarter, from a loss of Rs 2.1 crore a year before.

The Financial Express report further said that Hardcastle Restaurants is readying for pan-India operations, owing to a surge in consolidation in the quick service restaurant space.

McDonald's too is looking to replace CPRL. “We are already looking at the necessary steps to rebuild the brand. As part of this, we are committed to finding the right developmental licensee partner for north and east India, and are taking steps to do so,” Quartz quoted the company as saying.