Money raised via bonds drops by 13% in FY17; IPOs double IRCTC IPO: EXPLOSIVE LISTING! Didn't get shares? Don't worry - Do this, and you can become rich and book BIG PROFIT from stock price

WeWork looking for $2.75 billion credit line ahead of IPO

Money raised by bonds in the current financial year has dropped as against the previous fiscal.

The total amount raised in this fiscal combining both equity and bonds was Rs 80,741 crore as against Rs 82,803 crore in the last year, showing a drop of nearly 3%.

Amount raised through IPOs nearly doubled from previous year. 25 main-board IPOs came to the market collectively raising Rs 28,211 crore as compared to 24 IPOs for Rs. 14,500 crore in the previous year.

Pranav Haldea, MD, Prime Database, said, "A notable feature of the year again was that several companies that hit the market had a prior PE/VC investment. This was true for 11 out of the 25 IPOs. Offers for sale by such PE/VC investors at Rs 4,244 crore accounted for 15% of the total IPO amount. Offers for sale by promoters at Rs 10,953 crore accounted for a further 39% of the IPO amount."

The largest IPO was from ICICI Prudential Life Insurance for Rs 6,057 crore. The average deal size was a high Rs 1,128 crore.

As per the report, all 25 IPOs had anchor investors, which collectively subscribed to 30% of the total public issue amount. The domestic institutional investors played a significant role as anchor investors, with their subscription amounting to 14% of the amount, almost the same as the 16% from FIIs.

According to Haldea, response to IPOs was further buoyed by strong listing performance of IPOs of the year. Of the 23 IPOs which got listed, 18 gave a return of over 10% (based on closing price on listing date). Avenue Supermarts gave a stupendous return of 114% followed by Quess Corp. (59 per cent) and Sheela Foam (41%).

Further, the report showed that the current financial year had significant activity in the Small, Medium enterprises (SME) platform as there were 78 SME IPOs which collected a total of Rs 807 crore as against 50 SME IPOs collecting Rs 311 crore in the last fiscal.

The largest SME IPO in the year, as the data, was from  Euro India Fresh Foods raising Rs 49 crore. 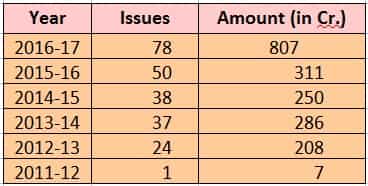 According to the data, the current financial year witnessed a raising of Rs 51,288 crore through the public equity markets, 5% higher than Rs 48,991 crore that was raised in the last year.

IRCTC IPO: EXPLOSIVE LISTING! Didn't get shares? Don't worry - Do this, and you can become rich and book BIG PROFIT from stock price

WeWork looking for $2.75 billion credit line ahead of IPO