The development comes just days after Byju's had announced the acquisition of US-based digital reading platform Epic for USD 500 million (around Rs 3,729.8 crore), and an additional USD 1 billion (about Rs 7,459.7 crore) investment in the North American market 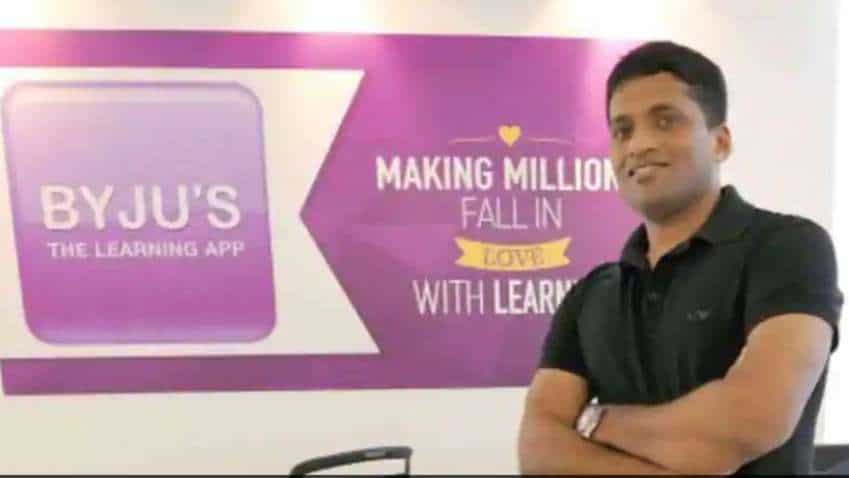 Launched in 2015, Byju's has 6.5 million annual paid subscriptions, and an annual renewal rate of 86 per cent. Source: Reuters
Written By: PTI
RELATED NEWS

Edtech major Byju's on Monday said it has acquired Singapore-headquartered Great Learning for USD 600 million (about Rs 4,466 crore), and will invest an additional USD 400 million to strengthen its position in the professional and higher education segment.

The development comes just days after Byju's had announced the acquisition of US-based digital reading platform Epic for USD 500 million (around Rs 3,729.8 crore), and an additional USD 1 billion (about Rs 7,459.7 crore) investment in the North American market.

Byju's has acquired Great Learning - a global player in the professional and higher education segment - in a transaction valued at USD 600 million comprising cash, stock and earnout, a statement said.

Byju's, which has 100 million registered students on its flagship learning app, has earmarked an additional USD 400 million of investment into this segment towards accelerating Great Learning's growth, it added.

"The acquisition marks Byju's strong push into the professional upskilling and life-long learning space globally with a total commitment of USD 1 billion, expanding its offerings beyond the K-12 and test prep segments, and further accelerating the company's growth plans," it said.

Great Learning will continue to operate as an independent unit in Byju's group under the leadership of its founder and CEO Mohan Lakhamraju and co-founders Hari Nair and Arjun Nair.

"With this substantial investment, Great Learning will accelerate its organic and inorganic growth in India and across global markets and expand its high-quality, transformational offerings to learners everywhere," it noted.

The partnership brings together Byju's technology and content expertise with Great Learning's professional courses at a significant time when the COVID-19 pandemic and evolving industry dynamics have encouraged professionals in India and globally to upskill themselves.

"Empowering learners with the right futuristic skills forms a fundamental part of our vision. Great Learning is a globally recognised and reputed professional education company and this partnership expands our reach into this new segment.

?We are united in our mission to provide professionals with high-quality and industry-relevant learning programs in this competitive global economy. With our combined strength, we aim to become a global market leader in this segment, Byju's founder and CEO Byju Raveendran said.

Founded in 2013, Great learning, a boot-strapped company, has delivered over 60 million hours of learning to 1.5 million learners from over 170 countries.

It leverages a curated network of over 2,800 industry expert mentors and has collaborated with universities globally, including Stanford University, Massachusetts Institute of Technology (MIT), McCombs School of Business - the University of Texas at Austin and others to offer degrees, diplomas and certificate programmes.

Great Learning and its teams are based out of Singapore, the US and India.

Together with Byju's, we will be able to accelerate our progress towards this goal and meet the growing need for upskilling both in India and around the world.

Further, as higher education moves online, we will leverage our joint strengths in technology, content, pedagogy and instructors to create unparalleled learning opportunities at affordable prices for everyone,? Lakhamraju said.

Launched in 2015, Byju's has 6.5 million annual paid subscriptions, and an annual renewal rate of 86 per cent.

Several players have raised fresh funding from investors, along with consolidation as seen with deals like Unacademy acquiring PrepLadder and Byju's acquisition of Aakash Educational Services.

The company has also been aggressively acquiring companies to bolster its presence across categories. In the past, Byju's had acquired TutorVista and Edurite (from Pearson in 2017) and Osmo in 2019.

Last year, the company had bought the coding training platform WhiteHat Jr for USD 300 million and in April this year, it acquired Aakash Educational Services Ltd (AESL) to bolster its presence in the test preparation segment in the country.