Sandeep Kumar, Managing Director, Tata Metaliks, talks about the quarter performance of the company, impact of iron ore prices on margins and availability of coking coal during an interview with Zee Business. 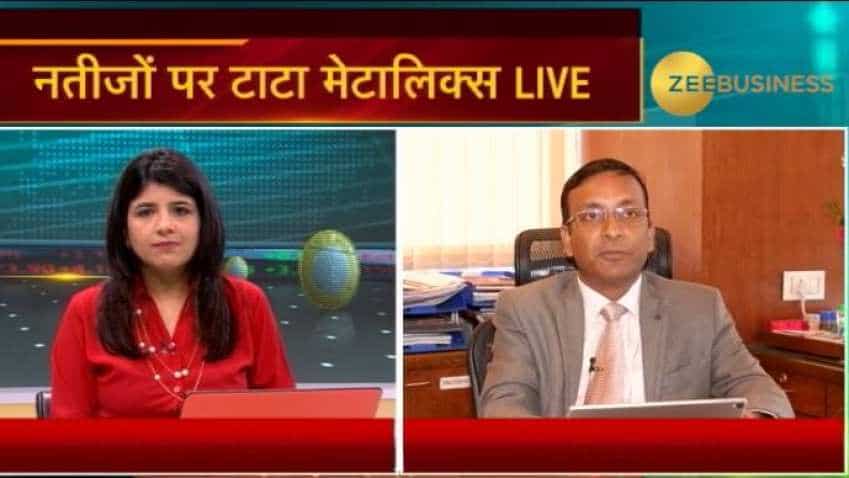 We also have some long-term contracts and that is a reason that we don’t face any glitches in its availability, said Sandeep Kumar. Image source: Zee Business
Written By: Swati Khandelwal
Edited By: Arun Kumar Chaubey
RELATED NEWS

Sandeep Kumar, Managing Director, Tata Metaliks, talks about the quarter performance of the company, impact of iron ore prices on margins and availability of coking coal during an interview with Swati Khandelwal, Zee Business. Excerpts:

Q: Tata Metaliks has posted weak results and reported a decline of 35% in its Profit After Tax (PAT). What was the reason for this decline?
A: The operational performance of the Q1 FY19 year on year (YoY) was good in all aspects. There is an 8% increase in hot-metal production and there has been a 14% additional increase in the sales of our major pipe business including pig iron and ductile iron pipe business. Operational performance and coke rate are better but the major reason that dragged down the profitability is the market spread of pig iron coke, which has declined. This had an impact of around Rs22 crore on our profit before tax (PBT). Even though we have performed well but the market didn’t support us. We would have improved our operational performance but the performance of one of our blast furnaces was down, which was relined in May and we had the highest ever production of hot metal in June. So, this is the overall picture.

Q: How rising iron ore prices had an impact on your margins and let us know about the synergy benefits that you are enjoying by sourcing the iron ore from group companies?
A: We source iron ore from Tata Steel and we also buy it from the market. Iron ore that is procured from Tata Steel is market-linked because related party transactions are brought at an arm’s length. So, the raw material prices have changed by around 3% and our pig iron prices have gone up in Q1FY20 when compared to Q1FY19. We take up iron ore from Tata Steel and also buy it from the market. The iron ore that we get from Tata Steel is market-linked because related party transactions buy it at an arm’s length. There has been a 3% change in the prices of the raw materials. This resulted in the pushing of the cost and the market was down by 3% which impacted our margins. As we go forward in Q2, the coal and coke prices have declined a bit and the impact of the price drop that began in Q1 will be seen in Q2 as there is some lag. There is some time gap between the time when you book a raw material and you receive it. We’ll be benefitted from the falling prices in the Q2.

Q: How is the availability of coking coal during the quarter and what do you expect from it in time to come?
A: There is no issue in the availability of coking coal as we import it from Australia, Canada, Indonesia and we have diversified it as we do not depend on a single country. We also have some long-term contracts and that is a reason that we don’t face any glitches in its availability. As I stated earlier, we take iron ore from Tata Steel and other mines in Odisha. These major spread outs help us with availability risks.  Many iron ore mines will be put up for auction in March 2020 as their lease period will be over and possibly it can raise certain concerns in the March period. However, the government is planning to reauction those mines in this quarter itself. So, let’s wait and see what unfolds from it.

Q: Do you see any benefits from government’s schemes like Jal Shakti programme? What is the position of the order book currently?
A: We had an order book of 11 months for our ductile iron pipe business at the beginning of the quarter and has reduced to 9-10 months by now. Nevertheless, this is a healthy order book as there were general elections in the Q1 which led to a delay in the release of funds and decision making. This is the result of the end of a financial year and people get busy with general elections, but the release of some funds has been initiated from Q2 onwards. We are looking at the order books now and it is moving up. So, the ductile iron pipe business is doing well and will continue to do well. There are monthly bookings on pig iron as it depends on spot prices.

Q: Your company’s debt has been significantly decreased from 475 crores to 39 crores. What are the additional measures that you have undertaken to improve the overall performance of your company?
A: Considering the debt to EBITDA and equity, we are in a very comfortable position. The balance sheet has been strengthened and TATA Steel has funded us at the end of last quarter and that’s why we don’t have any problem with the balance sheet. We are prepared for further growth and are doubling our capacity. Our main effort aims at improving operationally, particularly in our pig-iron business, blast furnace performances where we have some gap in terms of benchmarks.  On the other hand, we are performing well in the ductile iron pipe business and you will see that quarter on quarter (QoQ), and its business and operational performance will continue to be good. If you look at the margins of ductile iron pipes (DIP), it has increased to 16% from 11-12%. This quarter, in terms of operational performance, isn’t as unsatisfactory as the reduced profitability suggests. The market had a major impact on pig iron business.

Q: The merger with Tata Steel was called off on May 2016 and now Tata Steel has issued warrants amounting to Rs404 crores. Is there any plan for consolidation, group businesses and is there a possibility of a merger between Tata Metaliks and Tata Steel?
A: The merger was called off in 2016 and we do not have any plans for it as of now. We have an expansion project of Rs600-650 crore in Kharagpur and Tata Steel has funded around Rs400 crore in it through warrants and equity directly. Tata Metaliks is doing well at present. However, the previous talks of the merger were initiated when the company was not in good health and situations were different completely.