JK Lakshmi Cement on Wednesday posted its Q4 results and reported a 27.80% increase in standalone net profit at Rs 43.25 crore for the quarter ended March 2019. 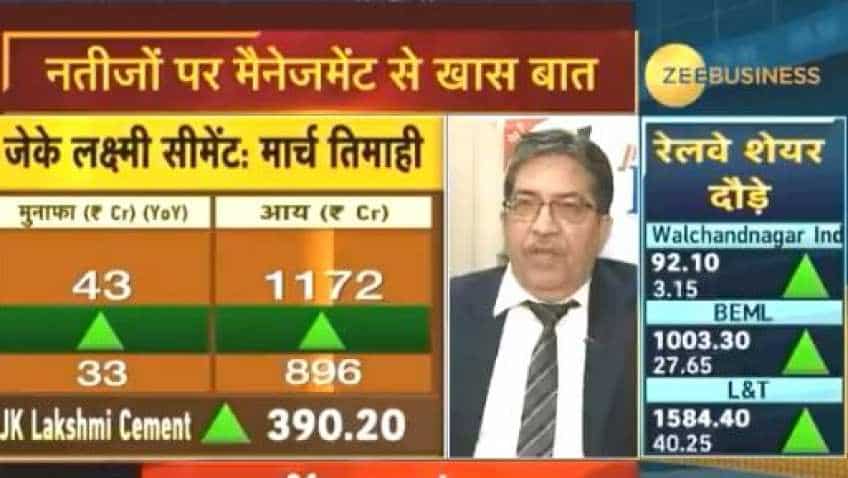 JK Lakshmi Cement on Wednesday posted its Q4 results and reported a 27.80% increase in standalone net profit at Rs 43.25 crore for the quarter ended March 2019. While in the same quarter last year, the company had reported a net profit of Rs 33.84 crore. Total income during the quarter under review rose 28.78 per cent to Rs 1,189.06 crore from Rs 923.32 crore in the corresponding period last year.

Shailendra Chowksey, Wholetime Director, JK Lakshmi Cement told Zee Business TV, ''As far as Q4 results are concerned, the main highlight is our volume growth. There is an increase of 32% in quarterly volumes, which is a very healthy growth mark in this sector, where average volume growth is 12%. While there is a 15% increase in production and 13% jump in overall annual sales, comparatively higher in regional competition from other players in the sector. We are expecting an overall growth of 8 to 9% in cement business in FY20.''

Meanwhile, in a separate filing, the company also informed the BSE that its board has recommended a dividend of Rs 0.75 per equity share of Rs 5 each for 2018-19.

''Prices of cement remains a major setback due to which our profitability has not witnessed an expected levels, except Q4. While the overall profitability of JK Lakshmi Cement have been flat. Infrastructure development like roads, metro, affordable housing have been the major contribution in our sales. We expect stability on the fronts of housing and government's focus on the sector demands,'' Chowksey added.

Shares of JK Lakshmi Cement Wednesday closed at Rs 392.80 on the BSE, up 4.44 per cent from its previous close.

Stocks to buy with Anil Singhvi: CAMS, NOCIL and JK Lakshmi Cement shares—Why INVESTORS should have these stocks in portfolio, Jay Thakkar explains