The offer assures customers buying iPhone 8, 8 Plus and iPhone X models through Jio that they will get back 70% of the cost after a year of use. 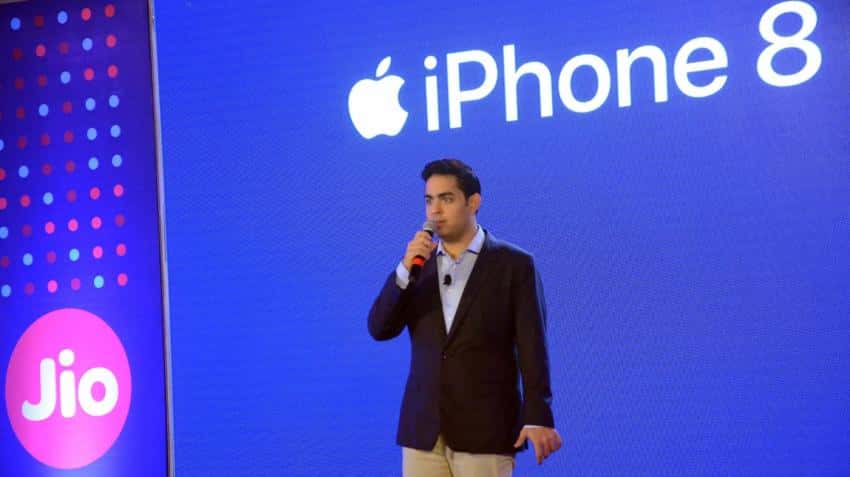 Akash Ambani, son of Reliance Industries Ltd Chairman Mukesh Ambani, at the launch of new iPhone 8 and 8 Plus at Reliance Jio's headquarters in NaviMumbai on Sept 29, 2017. Photo: IANS
Written By: Reuters
RELATED NEWS

Reports of iPhone 8 Plus screen splits open while charging emerge

Flipkart, Amazon offer deals on pre-booking iPhone 8; here's what they are

Around the world, a muted launch for Apple's iPhone 8

India's Reliance said on Friday that customers of its Jio telecoms unit who buy the latest Apple iPhone models from partner stores could sell them back in a year at a guaranteed price, a move that could help the US tech firm expand in India.

The offer, which comes during the Indian festive season when discretionary spending typically rises, assures customers buying iPhone 8, 8 Plus and iPhone X models through Jio that they will get back 70% of the cost after a year of use.

Apart from possibly lifting Apple sales in India, the move could also draw more high-paying customers to the Jio network.

Cupertino, California-based Apple is keen to sell more iPhones in India, one of the world`s biggest smartphone markets, but the high cost of its handsets has kept higher-end iPhones in particular out of the reach of hundreds of millions of Indians.

The deal with Reliance, an oil-to-telecoms conglomerate, is Apple`s latest attempt to grow in India`s competitive smartphone market, similar to the way it boosted sales in countries like the United States by partnering with network operators to subsidise the cost of the phone.

At 64,000 rupees ($980) the upfront cost of the iPhone 8 is still high however, and some remain sceptical that a buyback offer will do much to boost Apple`s market share in India where iPhone users can already easily resell old iPhones for 50 to 60% of their cost in the second-hand market.

"Older and more affordable iPhones will still make for a bulk of Apple`s sales in India," said Tarun Pathak, analyst at tech research firm Counterpoint. "People want their phones but not necessarily the latest and the most expensive ones."

This is the first time such a hefty buyback offer has been made for an iPhone in India, Akash Ambani, the son of India`s richest man, Reliance chairman Mukesh Ambani, said in Mumbai on Friday when unveiling the deal.

"We`re excited to be building so many new relationships in India," Apple CEO Tim Cook said in a brief pre-recorded video.

For Apple, growing in India is crucial as growth slows at home and in China. The deal will place Apple`s iPhones in Reliance and Jio retail stores in 900 cities across India, giving the company a chance to boost its meager 3% market share and close the gap with market leader Samsung Electronics.

For Reliance, this is the first time the company is offering such a hefty buyback price in a bid to win over high-spending Apple fans whose hunger for data, the company hopes, will boost revenues.

The offer, which will likely boost Reliance`s average revenue per user, will be available to Jio customers who buy the iPhone and subscribe to its 799 rupees ($12.22) monthly package for 12 months.

By comparison, the industry`s monthly average revenue per user was just 80 rupees in the quarter ended-June, according to recent regulatory data.

While there is no penalty for downgrading to a cheaper plan or leaving the contract mid-way through, customers who do so will lose out on the buyback offer.

This is unlike contract deals in some Western countries where the total cost of a phone is subsidised and there is a penalty for dropping contracts mid-way.

With the Apple deal at the high end of the spectrum, Jio is also working to woo cost-conscious aspirational smartphone buyers at the lower end with a $23 4G phone that blurs the line between a smartphone and a traditional feature phone.

The company, which has signed on 128 million users in less than a year via cut-price deals, is now eyeing between 250-300 million customers in the next two years, a source has told Reuters.

Reports of iPhone 8 Plus screen splits open while charging emerge

Flipkart, Amazon offer deals on pre-booking iPhone 8; here's what they are

Around the world, a muted launch for Apple's iPhone 8