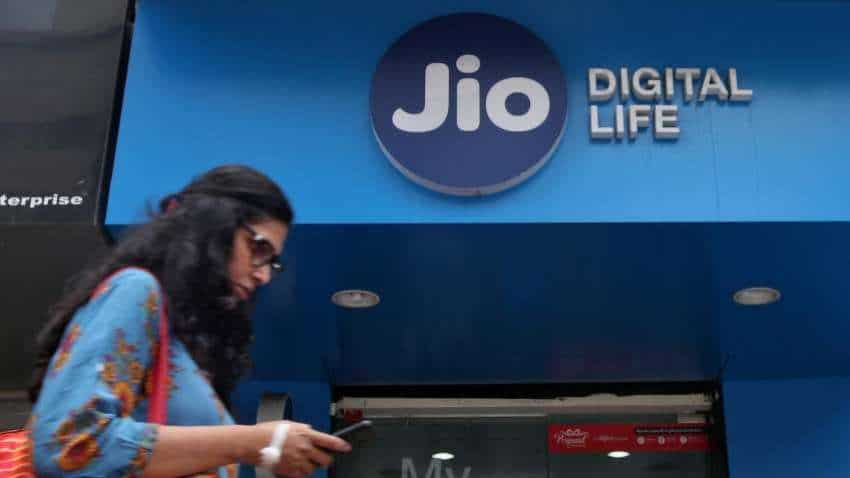 Elon Musk-led SpaceX has also shown interest in promoting broadband in India and pushed for the use of satellites for better connectivity and enhancing efficiency of scarce spectrum available in the country. Source: Reuters
Written By: ZeeBiz WebTeam
RELATED NEWS

Reliance Jio has urged telecom regulator Trai to work out a mandatory schedule for periodic spectrum auctions to ensure that telecom operators do not have to wait long for radiowaves to meet their network requirements.

Elon Musk-led SpaceX has also shown interest in promoting broadband in India and pushed for the use of satellites for better connectivity and enhancing efficiency of scarce spectrum available in the country.

The country's largest telecom operator Jio, in its comments on a consultation paper floated by the Telecom Regulatory Authority of India (Trai) on promoting broadband connectivity and enhancing broadband speed, said the four-year gap in spectrum auction by the government is inexplicable and huge amount of spectrum remains unutilised and unproductive.

The Mukesh Ambani-led firm had in September too written to Telecom Secretary Anshu Prakash questioning the Department of Telecom's rationale to pause the policy of annual spectrum auctions and said the sale of airwaves should be held at the earliest to meet the demand for data services.

"We submit that mobile broadband is now ubiquitous, however, the exponential growth of demand has now started to impact broadband speeds.

"The only way to to avoid this and ensure that the mobile broadband speeds are comparable to equally large or comparable economies is by putting more spectrum in the hands of the operators," Jio commented on Trai's paper.

Trai has now closed the window for submitting comments and has fixed November 23 as the deadline for counter-comments on the consultation paper.

"We submit that the 4 year gap in spectrum auction, despite the auctions being the harbingers of change in Indian telecom story and being tremendous success generating huge revenue to national exchequer, is inexplicable to say the least.

"If this was not perplexing enough, the fact remains that all this while the government had huge chunk of unutilised and unproductive spectrum," Jio said.

Trai had recommended a plan to auction spectrum worth Rs 5.22 lakh crore. However, some of the spectrum frequencies identified by the DoT for auction are being used by the defence ministry and the Department of Space.

According to Jio, spectrum worth Rs 3.92 lakh crore is lying unused with the DoT for auction.

Spectrum auctions in India were held every year between 2012 to 2016. No auctions have been held in the last four years.

"We humbly submit that Authority should ensure that this situation is not allowed to repeat again and it should propose a long-term spectrum auction schedule with periodic auctions at pre-determined intervals.

his schedule should be mandatorily followed, no matter the demand or results in previous auction. As unsold spectrum is still better than unauctioned spectrum which benefits no one," Jio said.

Bharti Airtel too cited shortage of spectrum in the hands of Indian mobile service providers.

The Sunil Bharti Mittal-led firm said the poor availability of broadband in India can be largely attributed to an unviable business model.

Airtel has suggested reduction in spectrum price, revision of adjusted gross revenue definition, introduction of minimum price for mobile call and data services and reduction in taxes for promoting broadband.

SpaceX, in its suggestion to Trai, too flagged the issue of taxes and other administrative burdens on companies hindering affordable broadband.

"... The unintended fees, taxes and other administrative burdens that, when passed on to end-users, can make broadband unaffordable to many," SpaceX Vice President for Satellite Government Affairs Patricia Cooper said.

SpaceX urged Trai to promote maximum spectrum efficiency by expecting users to coordinate use of scarce spectrum resources across multiple systems, whether terrestrial or space-based.

The US-based company has sought protection for satellite service in high-frequency bands which include a set of spectrum identified for 5G services by International Telecommunications Union (ITU) in the 26 Ghz band.

"...While India has long encouraged satellite operators to deploy gateway earth station facilities within the country, this policy is thwarted by the absence of Ka-band (26.5-40 Ghz band) frequency assignments that are required to communicate with those gateway earth stations.

"SpaceX encourages TRAI and spectrum agencies in India to develop an approval process for these assignments. This effort is fundamental to expanded high-speed broadband service in India," Cooper said.