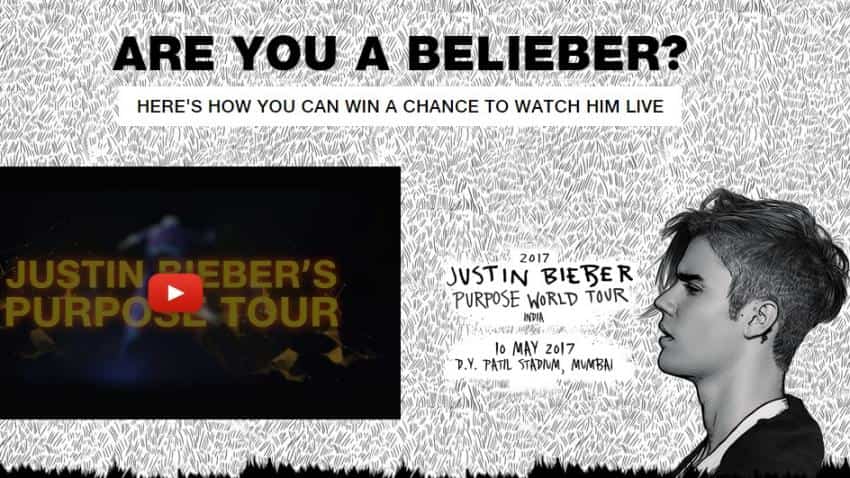 Participants would have to use the hashtag #JioBeliebers to participate. Image Source: Jiobelibers.com
Written By: ZeeBiz WebTeam
RELATED NEWS

Telecom operator, Reliance Jio started a contest on May 6 for participants to win free tickets to watch singer Justin Bieber live in concert.

“The winners would stand a chance to win passes for the live concert on 10th May in Navi Mumbai,” Reliance Jio said.

Bollywood actor, Shraddha Kapoor on Monday also urged fans via her Instagram account to join in the fun.

Jio said to participate in the concert you would have to send in entries before 9am on May 9, ‘Before it’s too late to say sorry.’

Participants would have to use the hashtag #JioBeliebers to participate.

The social media platforms started filling up with entries of all ‘Beliebers’ who showcased their affection for the singing sensation.

There were certain caveats to participating in the concert which meant that participants had to be over 13 years of age and an individual was eligible to win only one or a couple’s pass to the concert.

“If an advertised prize is not available, we reserve the right to offer an alternative prize,” Jio said.

From handwritten poems to mehendi drawings with lyrics of Justin Bieber songs, people went all out. Here are a few of the entries on the social media platforms.

My new drawing of @justinbieber
Specially done to get a chance to get win tickets from #Jiobeliebers @reliancejio ✌ pic.twitter.com/Wk5E2O1M2E

@reliancejio here is my entry for #JioBeliebers contest
You're my last hope to win
Hope I can watch my idol live pic.twitter.com/6Ueo1rLU7H

@reliancejio @justinbieber My sketch of my IDOL Justin hope to witness him LIVE #JioBeliebers #PurposeTour pic.twitter.com/NUP2ys9xA3

@reliancejio @justinbieber @reliancejio Here is my entry! A #JustinBieber song with 3 other Beliebers !#JioBeliebers #PurposeTourIndia pic.twitter.com/5vYULHMAv4

The concert will be held at the DY Patil Stadium, Navi Mumbai on Wednesday.

Media reports said that more than 50,000 tickets have already been sold for the concert.