Jet Airways pilots to stick to roster hours from March 1; operations to be hit

Jet Airways' operations are likely to be hit from next month with its  pilots  union NAG deciding to adhere to the duty roster from March 1 over non-payment of salaries, union sources said Monday. 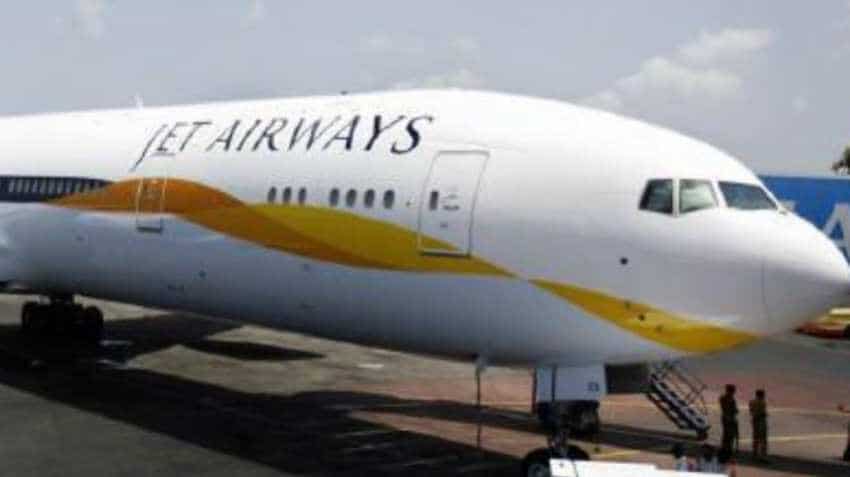 Earlier in the day, Jet Airways, a listed entity, told the stock exchanges it is working out a "mutually acceptable" arrangement to ensure it becomes current on salary overdues. Image source: Reuters

Jet Airways' operations are likely to be hit from next month with its pilots union NAG deciding to adhere to the duty roster from March 1 over non-payment of salaries, union sources said Monday. Members of the National Aviator's Guild (NAG) will not fly over and above roster hours from March 1, they said.
The Jet Airways management was not immediately available for a comment on the development.

In a communique sent to pilots, NAG said 25 per cent of November salary along with 12.5 per cent of December salary will be processed on February 26. "Since the management was unable to give any further payout commitment, a flight safety period along with black band protest will begin from March 1. A detailed mail will be sent soon by NAG," the communique said.

Earlier in the day, Jet Airways, a listed entity, told the stock exchanges it is working out a "mutually acceptable" arrangement to ensure it becomes current on salary overdues. The airline has been delaying salaries to its pilots along with engineers and senior management since last August.

"The union had a concall with the management today evening over our salary dues. Though it said it will pay the balance 25 per cent of our November salary and another 12.5 per cent from December salary, it did not give any commitment on when will it clear the rest dues. It was not acceptable to us," said a union source.

"Therefore, we have decided not to cooperate with the management any more. We will strictly adhere to the duty roster and will not accept the last minute changes in the schedule," the source said. "This will have a direct bearing on the flight operations," he added. He, however, clarified the pilots will not ground any aircraft.

The leading private airline said it is talking to its key stakeholders to resolve the issue. "We wish to state that the company is in dialogue with its key stakeholders, to enlist their full support and cooperation," the airline had said in a clarification to the stock exchanges. In doing so, the company is also apprising them of the challenges faced by the company, it said adding, "It is working out a mutually acceptable arrangement to ensure that the company becomes current on its salary overdues."

Later, NAG, in a statement, said, "We are now being forced to take some simple measures to alleviate the huge levels of stress." "We do hope that the company would take immediate steps to ensure that they address the issues that have brought this company to such a situation," NAG said.
The guild said it is well-known that the airline is going through difficult times.

"It is in public domain that Jet Airways is going through turbulent times. While all employees have been getting their salaries on time, pilots and AMEs (engineers) have been doled out part payments every once in a while and are now running several months behind on their salaries," it said. "Despite this, we, the pilots, have stood steadfast by the company and have maintained our flight schedules through the last few months in the hope that our support would see the brand we all helped build the airline once again," it added.

The pilots have time and again attempted to convey to the company the degree of stress being faced by them, it said adding, "the mounting financial burden and the uncertainty regarding our careers are both contributory factors to the difficult conditions in which we have been working."

Last week, a section of pilots had reportedly warned the airline of non-cooperation from March 1 if the management did not give a clarity on salary payment by February 25. The Naresh Goyal-founded carrier has 1,600 pilots, of which over 1,100 are unionised and represented by the NAG.
Jet Airways has a debt of nearly Rs 8,000 crore and needs to make repayments of up to Rs 1,700 crore by March-end.

In the three months ended December 2018, it reported its fourth consecutive quarterly net loss of Rs 732 crore. Due to liquidity crunch, the company has defaulted on payment of principal and interest to a consortium of domestic banks besides payments to lessors and a section of employees.