As the crisis in the private airline deepened, the Prime Minister's Office called an urgent meeting to discuss the situation, an official source said. 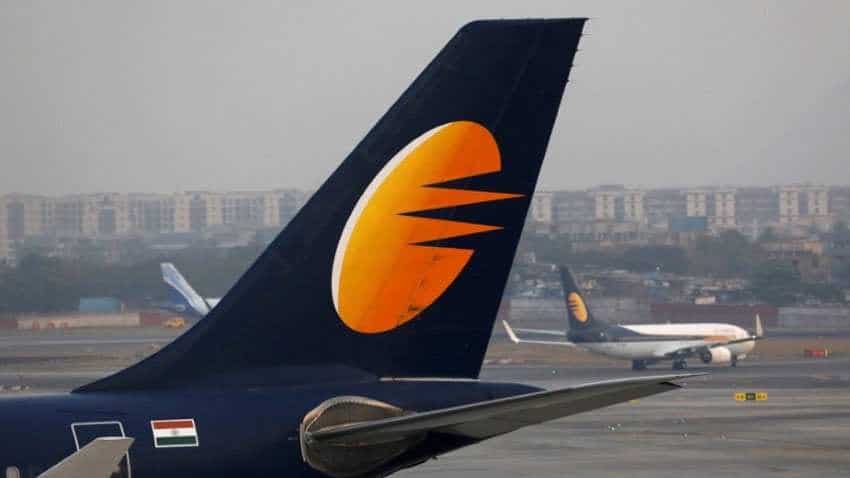 The airline on Friday also announced the suspension of its international flights till the weekend. Reuters image
Written By: ZeeBiz WebTeam
RELATED NEWS

The crisis in Jet Airways deepened Friday as the airline could operate only 11 aircraft on Friday, leaving passengers stranded at various domestic and international airports and prompting the Prime Minister's Office (PMO) to hold an urgent meeting to discuss the situation.

After participating in the meeting at the PMO, Kharola held a meeting - through video conference - with the management of Jet Airways.

Passengers were left stranded at airports as Jet Airways announced on Friday that it is suspending international operations till Monday. Moreover, its employees carried out a protest march in Mumbai, asking the airline to pay their pending salaries.

Kharola told reporters that Jet Airways flew 11 aircraft on Friday and will fly six to seven aircraft on both days this weekend on domestic routes.

When asked if the airline has enough funds to keep the operations going on till Monday, the secretary replied in affirmative.

He said that Jet Airways had a meeting with the bankers on Friday "wherein they put forth their demand" regarding interim funding. A consortium of lenders - leading with State Bank of India (SBI) - is currently handling the airline.

Kharola said that the bankers have asked the airline to "rework its proposal" regarding interim funding.

"Monday again, they (Jet Airways) will be approaching the bank. Depending on what the banks decide, the future course of action would be taken," he said.

"Till Monday afternoon, (six to) seven planes would be flying. After that how many would fly would depend on their interaction with bankers," he added.

Naresh Goyal owns 50.1 percent in the airline, most of which is pledged with the consortium of lenders. Goyal had last month agreed to pare down his stake to 25.5 percent for an emergency fund of Rs 1,500 crore from the lenders, and leave the board but the process is yet to be completed due to procedural delays.

Airfares have been on an upswing across India for the last few weeks due to sharp decline in number of flights primarily caused by grounding of 90 per cent of the 119-aircraft fleet of Jet Airways.

The airline on Thursday had suspended its operations to the eastern and northeastern cities of India "till further notice".

Earlier in the day, over 200 employees, under union president and NCP lawmaker Kiran Pawaskar, took out a march from the airport to Jet headquarters Siroya Centre, in Andheri and met senior management,though they wanted to meet Dube.

Later, they went to the police seeking to register an FIR against Goyal, Dube and Kumar, SBI is the lead lender to the airline, who are wresting the control of the airline now.

"We have to inform you that Jet has not paid our March salaries of date. We call upon you to register offences for cheating, criminal breach of trust, misappropriation of funds and other offences under relevant sections of the law," Pawaskar, who heads the All-India Jet Airways Officers & Staff Association, said in a complaint to senior inspector of the suburban Sahar police station.

Before meeting the management, Pawaskar addressed the employees and blamed the government policies for the downfall of the airline. He also claimed that whatever the little money the airline is earning now is being used to make refunds to the passengers.

In the meanwhile, the stranded passengers at the Mumbai airport alleged that they are not getting refunds and are being forced to shell out much higher price for last- minute tickets.
"I had a flight to New Delhi this evening, but when I reached the airport I was informed that the flight was cancelled. When I sought the refund, I was told to collect it from my travel agent," said an aggrieved passenger.

However, the employees complained that due to the last minute cancellations, they are in the line of fire of the harried passengers.