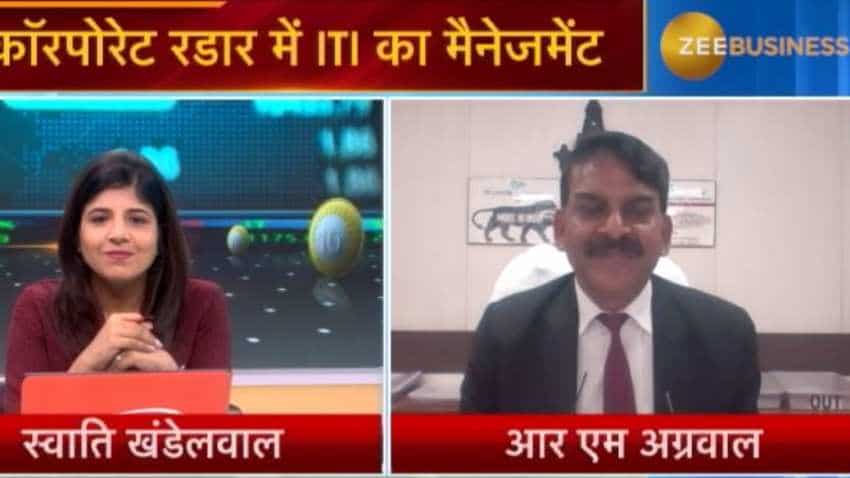 ITI's, reliance on BSNL and MTNL has decreased to just 5%. And, our 90-95% reliance comes from other sectors exclusive of the BSNL and MTNL, said ITI CMD.
Written By: Jitesh Kumar Jha
Edited By: Asit Manohar
RELATED NEWS

What is your view on the current position of BSNL and MTNL in the national telecom play?
Our, ITI's, reliance on BSNL and MTNL has decreased to just 5%. And, our 90-95% reliance comes from other sectors exclusive of the BSNL and MTNL. We have a dependency on defence, BPNL, and projects of Bharat Net.

Let us know about the current level of implementation and acceptance of the cloud services and solutions platform that was launched for central and state government entities?
We have two data centres and the first data centre is 100% occupied. When it comes to the second data centre, which is a 1000-seater data centre, 356 racks have been commissioned and they will become operational by next month. The remaining 744 racks will be operational by March 2020 and then offered to the public. Thus, the level of implementation is too fast as 365 racks will be commissioned by next one month and the remaining racks will be operational and offered to the market in the next 4 months.

Let us know about the order book of the company and do you have some orders that will conclude in this fiscal?
We have an order book of Rs7,600 crore at present. The main order belongs to BharatNet, i.e. BharatNet Gujarat project is of Rs1,400 crore and BharatNet Maharashtra worth Rs2,600 crore. Apart from this, EESL's Smart Energy Meter supply order stands at Rs850 crore. Manufacturing orders of small projects - like optical fibre, cable, HDP Pipe, solar panel, Wi-Fi equipment, smart banking cards and data centre services - worth Rs500 crore. Plus an order book of Rs700 crore is lying with 26-30 marketing service and project units. Thus, we have a confirmed order book of around Rs7,600 crore.

An advance purchase order of around Rs7,400 crore has reached us but we are waiting for their conformation. Besides, we have further order book of around Rs7,800 crore, where we are L1 in which the main project of Rs7,200 crore belongs to ASCON Fort Project - ASCON (Army Static Communication Network) phase I, II and III - and ITI has been doing it for the past 35 years and it has worked in all the three phases. Interestingly, some two years ago we reached the L1 position in it against L&T, Sterlite, BL and DelTel. Of this Rs7,200 crore, Rs4,200 crore is the CapEx amount whole the remaining Rs3,000 crore is for OPEX (operational expenditure). So, on combining the three, the order book will stand around Rs22,000 crore. Of this, the ASCON's order of Rs7,200 crore will be given to us, soon, as indicated by the Defence Ministry and senior officials of the defence forces. We have been maintaining the ASCON 3 network for the last 12 years has expired and is running just on an extended-term.

What is the timeline for order book where you have reached the L1 levels?
Army's order book has a timeline of three years for its completion but it was issued around 2 years ago, where we reached the L1 position in it. Thus, the project is getting delayed a bit and we are waiting to get the order. We have made commitments - during our last meet with the senior-most officers of the Army Headquarters - that ITI is in the position to complete this project in next 2 years time and have prepared ourselves for the purpose. So, we will complete the order on the fast track as soon as we get the order book. In fact, we will complete it within 2 years instead of 3 years, which is a timeline for the purpose. Similarly, the OPEX/maintenance amount of Rs3,200 crore will come to us for the next 10 years. So, the CapEx will be invested in 2-2.5 years and the amount for OPEX will be used in the remaining period. That is for the Army order while the remaining orders like an order from Gujarat will be completed in the next four months. We are moving at a fast pace in Gujarat and 40% of the work has been completed and the remaining 60% will be completed by March. Apart from this, the order form Maharashtra will be completed in the next eight months and EESL's smart meter project will be completed by next year. So, the existing and incoming orders will be completed in the next four months to a two-and-a-half-year.

In terms of margins, what are the margin expectations for H2FY20 and what is your outlook for future margins?
We are, now, bidding on a very competitive basis. Apart from this, we have created a strategy which is different from the previous strategy in which we used to work on a back-to-back basis. But now, ITI has completed project management for every work that we have and that is coming to us. So, the margins for the products manufactured at our place - like Wi-Fi equipment, optical fibre, SDP pipe, smart energy metre, smart banking cards, data cell business among others - varies from 20-28%. Similarly, the projects that we have, like the Gujarat Project, is being done at our end. In this too, we are gaining 20-23% in terms of margins. However, the old back-to-back project like NFS project were lower margin cases for us as we were giving everything to the partners and earned a margin of around 3-5% only. So, the previous low margin era projects have come to an end and the new projects are high-margin cases. In fact, ITI will complete the Army's project of Rs7,200 crore at its own level and it is a high margin case and we will have a margin of around 25-30%.

Provide the CapEx plan for FY2021 and update us on the current debt position of the company and how it will be reduced?
The government of India has approved a revival plan of around Rs4,164 crore in 2014-15 in which Rs2,264 crore was meant for Capital Expenditure while remaining Rs1,894 crore was OPEX expenditure. This means the capital amount is being funded by the government's revival plan of which around Rs769 crore has been allocated to ITI. The government has the capital fund of around Rs1,500 with it.

There is a major change on the equity front, earlier, things were at par and our shares priced Rs10 were being allocated to the government at the same price. But, last year, we are trying to provide a market rate to the government because our IPO will come soon. So, it was an important factor as we want to allocate the shares to the government as per the market price. Even, the government has agreed on it.

The government is supposed to fund the CapEx - around Rs1,500 crore - for the next two years and the shares will be allocated to them at the market rate. Under CapEx, optical fibre is major equipment and we have our own plant for the same and we are supposed to expand it. We also have HDPE pipe plants and it should be expanded.

We are developing a new plant of the lithium-ion battery at the Bangalore plant. Solar panels are developed at our Naini plant and its backward integration will help us in developing a solar cell plant at the place. Similarly, we are planning a data centre at Naini. We are also technological company also now and have tied up with the Indian electronic semiconductor association in the recent past for 5G village, robotics and artificial intelligence. ITI will play a major role in new technology and we will be investing around Rs100 crore in that.

Just like Microsoft, are you planning to link with any other foreign player for your data centres?
Soon, we are going to invite tender for the operation maintenance and marketing plans for the Data Centre. So, all the local companies including the foreign companies are most welcome to engage with us because there is a transparent process in case of PSUs and that's why I can't say that we will go with a multi-national but all big companies who are world leaders in those things will definitely be preferred.