Rakesh Mohan Agarwal, Chairman and Managing Director, Indian Telephone Industries (ITI) Limited, talks about his business expectation in 2021 and what is his outlook for the year, PM WANI scheme and opportunities associated with it, current and expected order books and margins during an exclusive chat with Swati Khandelwal, Zee Business. 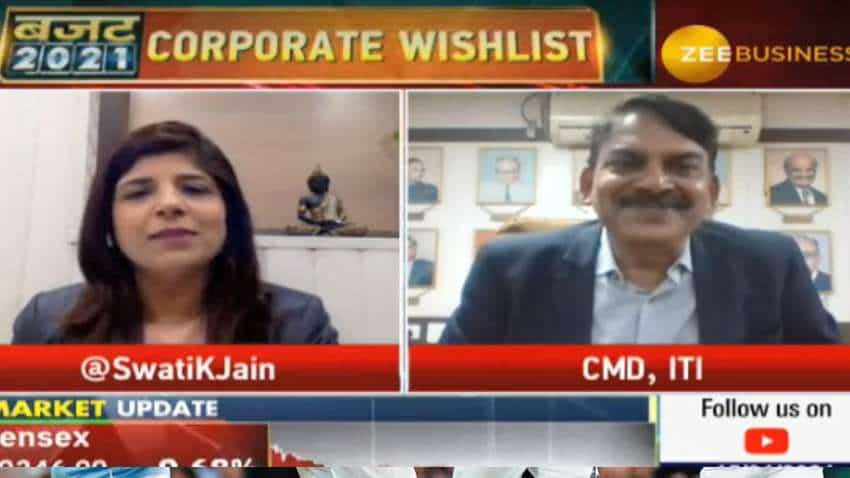 Rakesh Mohan Agarwal, Chairman and Managing Director, Indian Telephone Industries (ITI) Limited, talks about his business expectation in 2021 and what is his outlook for the year.
Written By: Jitesh Kumar Jha
Edited By: Harish Dugh
RELATED NEWS

Rakesh Mohan Agarwal, Chairman and Managing Director, Indian Telephone Industries (ITI) Limited, talks about his business expectation in 2021 and what is his outlook for the year, PM WANI scheme and opportunities associated with it, current and expected order books and margins during an exclusive chat with Swati Khandelwal, Zee Business. Edited Excerpts:

Q: What are your expectations from 2021 and what is your outlook for the company?

A: In the COVID year, ITI has tried to maintain ourselves at the level of last year's results and I expect that we will be able to perform at least 10% better than the last year's results by the fourth quarter. Our first and second quarters were affected a bit but the third quarter will be a little better and things will improve by the fourth quarter. So, the profitability and turnover of the company will match at least with the last year's performance.

Q: What is your outlook for the financial year 2021-22 (FY22) and which kind of targets has been set in terms of the top line, bottom line and margins?

A: This FY22, FY23 and FY24 are going to be very good for us as I have told you earlier that we have received a very big Army Static Communication Network order this year itself. Preparation for the same is going on and it will be completed by the end of the fourth quarter. So from quarter one onwards, we will get its good results in terms of top line and bottom line. Thus, in FY22, we can expect a growth of at least 25-30% and similar growth will be maintained for the next three years not only from this project. The honourable Prime Minister has announced a public WI-FI scheme, named Prime Minister's Wi-Fi Access Network Initiative (PM-WANI) scheme, one month ago. And, we have also started manufacturing the same because it is a good product in WI-FI area and we will be distributing it across India in the public sector and private sector. Similarly, ITI's 20% reservation quota in BSNL's 4G tender is intact and we are expecting profitability in it, as well. We will start manufacturing 4G equipment. So, we just don't have projects but are also entering into different product lines due to which we expect a good top line and bottom line.

Q: What is the order book that the company is expected by the end of the year? Also, let us know about next year's prospects?

Q: You have talked about the Prime Minister's Wi-Fi Access Network Initiative (PM-WANI) scheme. How big is this opportunity, what is the market size of the scheme and update about your participation in it?

A: The Ministry of Communications and Information Technology took a Cabinet approval last month under which it was said that going forward, any public or private Wi-Fi that will be installed in India should be manufactured in India. So, you can see that Chinese products were already banned and, now with this decision it will be banned completely. Secondly, the government has also discouraged the products which were sourced from other countries, apart from China, and has said that local products will be used in it. In terms of Wi-Fi in our country when compared with the developed countries, we do exist at just 5%. So, there is a lot of scope in Wi-Fi in a country of more than 125 crore people. Interestingly, complete rural area and city area has to be covered with Wi-Fi, this means a demand for an additional 20 million Wi-Fi will come up by 2022. And, ITI and Centre for Development of Telematics (C-DoT) have the same technology and we have already tied up. As a pilot project, we have started manufacturing the first 1000 products and they will be out in the next 10 days. So, it will be launched as a pilot (POC). We have an annual capacity of manufacturing 15 lakh Wi-Fi's which can be increased further if needed. Besides, this Wi-Fi will emerge as a much cheaper product. The Wi-Fi that is available in the market at present including the China-make does not come below Rs 7,000-8,000. I expect that this Wi-Fi's cost will be 30-40% lower than the Wi-Fi that is imported from China. C-DOT, which was earlier existed as RAX technology, a small exchange, for which it was known and ITI was a manufacturer for it. Once again, C-DOT and ITI Limited is working on the same combination and expect that the product will become quite popular in the next one-two years.

Q: What are you expecting from the government in this year's budget that will benefit your sector and company?

A: Government of India has given a big push to THE manufacturing sector. It has already provided a preferential treatment and has already approved the PLI incentive for the telecom sector. We will get preference, whether we manufacture a Wi-Fi product or bring something from outside. At the same time, we are also in the smart energy sector and are manufacturing smart energy meters. So, we are sending a plan to the government of India to reduce the customs duty on the smart energy components that are sourced from outside because 90% of the components are imported. Secondly, the smart energy meters should also be included under the PLI scheme. So, these are the two main recommendations that we are sending to the government and expect that it will happen.