Interview: How NHPC plans to raise 30% capacity by 2022, get funds, create jobs

In an exclusive interview with Zee Business Online, NHPC CMD Balraj Joshi reveals plans of the PSU for the next three years, how it will benefit with the Narendra Modi government's decision to recognise hydropower as a renewable source and NHPC's vision for becoming a job creator. 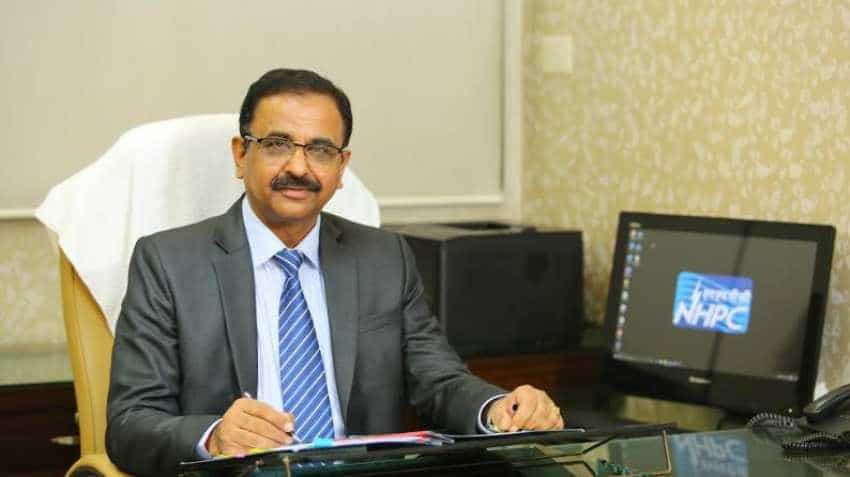 NHPC Limited is on a roll. In the fourth quarter of FY 2018-19, which ended on March 31 this year, the Government of India enterprise reported a net profit of Rs 492.29 crore, recording a whopping 146% per cent increase over the net profit of Rs 199.8 crore in the same quarter of the previous financial quarter. Going forward, India's premier hydropower utility has big plans. In an exclusive interview with Zee Business Online, NHPC CMD Balraj Joshi reveals plans of the PSU for the next three years, how it will benefit with the Narendra Modi government's decision to recognise hydropower as a renewable source and NHPC's vision for becoming a job creator.

How the government's decision to recognize hydropower as a renewable source of energy is going to benefit NHPC?

The decision to recognize hydropower as a renewable source, irrespective of its size, shall bring the large hydropower at par with Solar and Wind. There has been accelerated development of Solar and wind in the current decade. However, due to their intermittent nature, we need grid balancing capacity which only hydro can provide in a practical manner. By a conservative estimate, we will have to double up our hydro capacity in the next decade. It is toward this end, the positive impact of the decisions taken by the government shall be visible to all in the coming years.

NHPC with its expertise in development of hydropower is in pole position to garner the major portion of this business pie.  If we look at the overall initiative, it is a landmark decision for the development of hydropower. More than anything it is the recognition of the crucial role hydropower plays in the power basket of the country. As you are aware the maximum untapped Hydropower potential remains in the far-flung, remote and hilly areas of the country. Strengthening and developing the enabling infrastructure in these parts is a costly affair and is a considerable part of the overall project cost which ultimately means costly power. The budgetary support for cost towards enabling infrastructure shall go a long way in making the tariffs from hydro projects competitive. Further, the tariff rationalization measures shall also help in keeping tariff low in initial years.

News reports said recently that NHPC aims to raise capacity by nearly a third by 2022. How are you going to achieve this?

The major works in 800 MW Parbati-II H E Projects are over, except around 3 km of HRT excavation. The HRT works have gained momentum and the Project shall be commissioned by 2021. We have positive expectations about restarting the 2000 MW Subansiri Lower H E Project and we are in a position to complete the Project within 3½ - 4 years of the restart. Further, our diversification efforts towards Solar and Wind are going to further ramp up our capacity.

What are the three important targets NHPC wants to achieve in, say, the next three years?

With the renewed thrust on the hydropower sector, our prime focus shall be on capacity expansion and tapping our full potential. One of the priorities shall be completing Parbati-II and Subansiri Lower H E Project. With the aggressive hydro expansion expected in the country, our expertise in hydro power development shall also bring us sizeable Consultancy assignments.

What are the ways through which you are trying to meet funding requirements for various projects?

Hydropower is a capital intensive sector and fortunately with our track record, fund raising has never been an issue for us, be it through service bonds or through multilateral funding agencies. Our future requirements are adequately tied up.

Reports said recently that NHPC has signed a contract with Indian Army to construct underground bunkers and caverns across India. Your comments on this?

We have already done tunnelling of more than 200 km in varying geological strata. Therefore with such experience and expertise, NHPC is the obvious choice for underground works. Our expertise makes us the perfect fit for meeting the army's requirement of underground bunkers and caverns. This is an opportunity for us to play our part in shoring up the nation’s strategic capabilities.

What is the most important NHPC project for you now, and why?

Subansiri Lower H E Project is, of course, the most important project for us. The size of the project, as well as the advance stage of construction in which the project has reached naturally, propels us for completion of the project and this shall remain our biggest priority.

What are the other exciting initiatives taken by NHPC?

Although Hydro remains our core competency area, we have also ventured into Solar and wind. Power trading is something where we are constantly gaining ground on other established players.

However, what excites us most is the fact that our projects are vehicles of socio-economic development and the overall growth in project area gives us great satisfaction.  Let me also say that these projects are harbingers of national integration where citizens from across the country contribute for a single cause.

Where do you see NHPC as a job creator in the near future?

The good part about hydro development is that these projects are labour intensive. With an average construction period of six years, considerable job creation takes place. Moreover, the skill learned means constant technical upgradation of the workforce employed in the job making their future secure and prosperous. The hydel plants not only generate power but also create direct and indirect employment/entrepreneurial opportunities.