INSIDE DETAILS! What Turkish Airlines is doing with IndiGo to spread wings in India 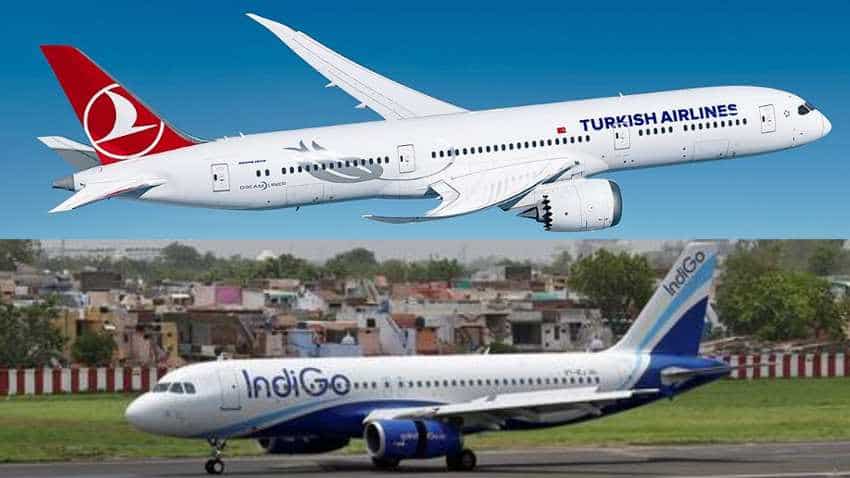 IndiGo had commenced its services to Istanbul earlier this year.
Written By: ZeeBiz WebTeam
RELATED NEWS

In an effort to spread its wings in India and tap into the rising transfer passenger traffic from the country, global passenger carrier Turkish Airlines wants to expand its codeshare agreement with the largest domestic player IndiGo.

What is codeshare agreement? How does it help?

A codeshare agreement allows two airlines to sell seats on each others' flights in order to provide passengers with a wider choice of destinations.

The Istanbul-based airline is in a unique position as it not only has a codeshare agreement with IndiGo, but also with Air India. The airline has commenced talks with IndiGo over the possibility of enhancing their present agreement, which was reached in 2018.

The current codeshare and mutual cooperation agreements between Turkish Airlines and IndiGo enables passengers of both the carriers to fly to various destinations in India, Turkey and beyond. Significantly, the agreement has been beneficial for Turkish Airlines, as it gets a healthy traffic flow from IndiGo for its extensive network in Europe.

Nonetheless, the enhanced agreement might see addition of other European destinations, including London, along with routes from Istanbul to the US East Coast.

On the other hand, it is expected that out of the two daily flights from New Delhi to Istanbul, IndiGo might start one service from another Indian city.

At present, Turkish Airlines operates 14 times a week to both New Delhi and Mumbai from Istanbul, while IndiGo operates two daily services between Delhi and Istanbul.

IndiGo had commenced its services to Istanbul earlier this year.

Turkish Airlines has over 300 passenger and cargo aircraft flying to more than 300 destinations worldwide. The airline launched its operations in India with flights to New Delhi in 2003 and to Mumbai in 2006.

On its part, IndiGo has a fleet of over 240 aircraft and offers almost 1,500 daily flights connecting 60 domestic and 23 international destinations.

On enhancing partnership with IndiGo, Mert Dorman, SVP, Corporate Marketing and Distribution Channels, Turkish Airlines, told IANS: "We are working with our partner IndiGo to enhance our partnership... We are ready to extend any type of co-operation."

In terms of the corporate market, Dorman said the airline is interested in roping in IndiGo's clientele into its corporate club programme and work closely with other Indian companies to increase corporate sales.

Overall, India has emerged as a key market for Turkish Airlines.

Currently, 3,000 seats each can be offered per week on both ways between India and Turkey. However, these rights have been exhausted.