Infosys share prices surge! Here is what you should do as an investor

The Dalal Street has supported the efforts of IT behemoth Infosys as the share is trading higher for the fifth straight day, up 10-12 per cent in the past two weeks. The share traded at 720.50 on Thursday around 1300 hrs, up by 1.2%. 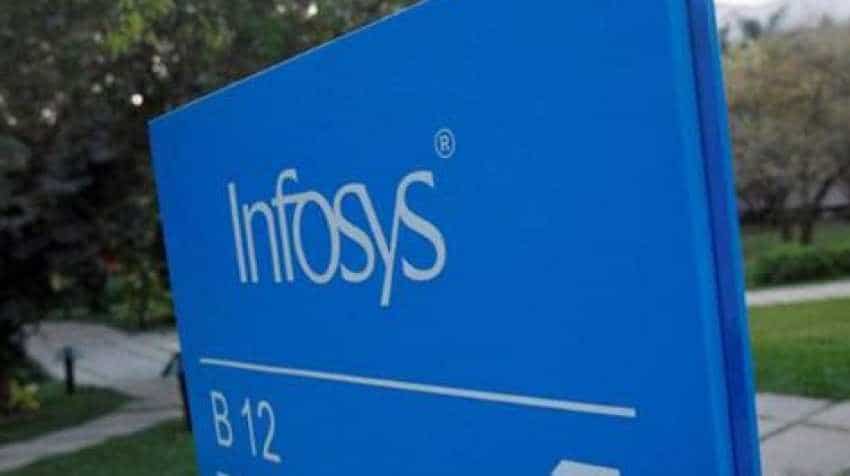 The shares of the company traded 1.18% cent higher at Rs 720.50 on BSE following the development on Thursday. Reuters
Written By: Hardik Bansal
Edited By: Prashant Singh
RELATED NEWS

The Dalal Street has supported the efforts of IT behemoth Infosys as the share is trading higher for the fifth straight day, up 10-12 per cent in the past two weeks. The share traded at 720.50 on Thursday around 1300 hrs, up by 1.2%. The experts are bullish on the stock as of now. Prior to that, the share price of Infosys slipped 17 per cent in just three trading days from Rs 768 to Rs 635 after an anonymous whistleblower group's allegation on the company’s current management for using unethical practices for spurring revenue and profits.

Emkay Global Financial Services has given a HOLD rating to Infosys for a Target Price of Rs 785, seeing the fundamentals of the company as strong and consolidated.

''On the large deal front, Infosys indicated both improvements in win rates and deal pipeline to drive large deal wins. Infosys indicated significant investments (hiring and re-skilling of the sales team), focus on large deal wins in select segments with-in each vertical, partnerships with deal advisors and involvement of leadership from the start of the deal process are helping in improvement in TCV of deal wins,'' the Emkay Global report added.

Infosys on Tuesday closed higher by 2.4% after the management in the concall assured investors and analysts that all necessary measures are being taken to address the whistleblower complaint and the day to day business won’t be affected.

Investigation update on the whistleblower case

The recent statement released by Infosys said, ''Infosys strongly condemns the mischievous insinuations made by anonymous sources against the co-founders and former colleagues, suggesting their involvement in the recent whistleblower allegations.''

Referring to the anonymous complaints in a stock exchange filing, Infosys Chairman Nandan Nilekani on Wednesday said, "These speculations are appalling and seem to be aimed at tarnishing the image of some of the most accomplished and respected individuals. I have a deep regard for the life-long contribution of all our co-founders. They have built this institution and have served this company selflessly and even today, remain committed to the long-term success of Infosys," he said.

Infosys highlighted high standards of corporate governance in the company and stated that the process followed by the company in this particular case was in-line with its Whistleblower policies. On not disclosing, Infosys stated that it wanted to do a thorough investigation before making any disclosures. The chairman remained appreciative of the management and indicated full support to management to support continued execution.

What was the case?

According to some media reports, a group of employees describing themselves as 'ethical' employees had written to the Infosys Board of Directors and the US SEC alleging unethical practices by its CEO Salil Parekh in recent quarters.

The shares of the company traded 1.18% cent higher at Rs 720.50 on BSE following the development on Thursday.