Infosys chief executive officer Vishal Sikka on Monday attempted to allay concerns over a corporate governance row between the software services firm and its founders stating that his relations with N R Narayana Murthy and co-founders were excellent. 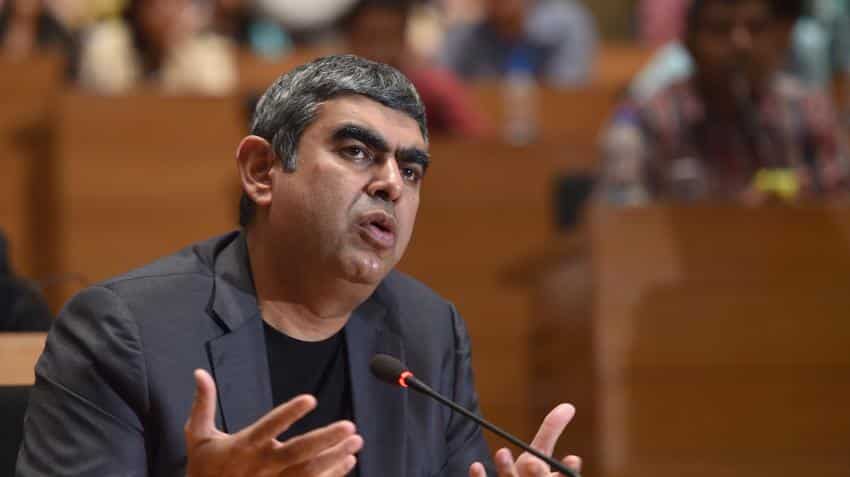 Don't be distracted by gossip about Infosys, says CEO Vishal Sikka to employees

Infosys Chief Executive Vishal Sikka attempted on Monday to allay concerns over a corporate governance row between the software services firm and its founders, saying his relations with N R Narayana Murthy and co-founders were excellent.

India`s No 2 IT services company, based in the southern tech hub of Bengaluru, has been locked in an escalating public war of words with its founders and former executives, who, led by Murthy, have accused its board of lapses in corporate governance.

Infosys` founders, who own 12.75% of the firm, have questioned the pay of Sikka and severance payouts given to others, including its former finance head Rajiv Bansal. According to local media reports, the founders have also questioned the appointment of an independent director.

Addressing an investor conference in Mumbai on Monday, Sikka called Murthy an "incredible man". He dubbed issues raised in the media around corporate governance lapses at the firm as "distracting".

"My relation with the founders is wonderful," Sikka said at the event hosted by brokerage firm Kotak.

"All this drama that`s been going on in the media, it`s very distracting, it takes away attention, but underneath that there is a very strong fabric that this company is based on and it is a real privilege for me to be its leader."

The row comes at a time when the more $150 billion Indian IT services sector has seen a slowdown in deal wins from Western clients, and is bracing for changes in visa rules in its biggest market, the United States (US), that could increase costs significantly and dent profits.

Infosys, founded in 1981 when seven engineers, including Murthy, pooled $250 that was mostly borrowed from their wives, is expected to address the governance concerns at a separate news conference at 1230 GMT on Monday.

Sikka, a former member of the executive board at German software firm SAP, took the top job at Infosys in 2014, becoming its first non-founder chief executive officer (CEO). Later that year, Murthy voluntarily gave up his board position.

One of the sore points between the board and the founders has been the salary of Sikka - who is due to get as much as $11 million based on Infosys` performance.

The board has backed Sikka and has brushed aside concerns over CEO compensation, appointment of independent directors and severance pay relating to former employees, saying those were old issues and that full disclosures had been made.

Investors have worried that the dispute over alleged corporate governance lapses at Infosys will turn as ugly as it has at the Tatas, India`s top conglomerate, where the ousted former chairman has waged a legal battle against the company.

Sikka`s comments on Monday and Infosys`s upcoming news conference seemed to soothe investors, with a fund manager calling it a "confidence building" measure. Infosys shares rose 1.7% after Sikka`s comments to their highest level in a month.

"Probably this is not going to precipitate into something like the Tatas," said R K Gupta, managing director at Taurus Asset Management, which owns Infosys shares.

Responding to a query on a potential share buyback, another concern raised by former some executives, Sikka said Infosys would weigh buybacks against the company`s business needs and the use of capital toward potential acquisitions. The company is sitting on a cash pile of more than $5 billion, as of December 31.

Don't be distracted by gossip about Infosys, says CEO Vishal Sikka to employees