The company is set to announce its financial result for the quarter ended on March 31 tomorrow. 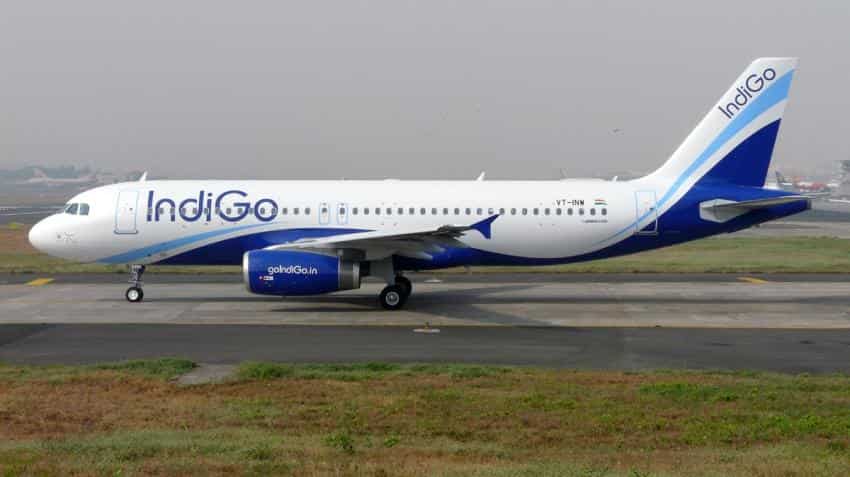 At 1320 hours the share price of the company were trading at Rs 1125.95 per piece. Photo: Official website
Written By: ZeeBiz WebTeam
RELATED NEWS

Share price of InterGlobe Aviation, parent company of low-cost domestic carrier IndiGo on Monday was trading marginally up ahead of its financial result announcement.

The company is set to announce its financial result for the quarter ended on March 31 tomorrow. In the previous quarter, the company's net profit had decreased by 25% to Rs 487.25 crore.

Aditya Ghosh, Whole-time Director of Indigo had said, "We have reported yet another profitable quarter despite lower yields and higher fuel prices. We see robust traffic ahead and we will continue to grow and strengthen our network with a view to maximizing our long term profitability."

If we talk about the outlook for the whole aviation sector for the financial year 2016-17, low fares which improved load factors of airlines they are now expected to impact profitability and EBITDA of listed airlines on BSE, NSE like Jet Airways, SpiceJet and Indigo this Q4.

Ansuman Deb, Research Analysts of ICICI Securities said, “Q4FY17 is likely to be the bottom for airline margins as cost tailwinds come back from Q1FY18. As such, valuations will not depend on this quarterly performance. Yet, Q4FY17 will provide insights to how airlines fare in a relatively adverse scenario in their ability to pass on higher costs. ”

According to Edelweiss Securities research report, the company's revenue growth is expected to grow by 21% on year-on-year basis on account of  growth in passengers, despite lower yields. However, margins will be stunted due to higher Aviation Turbine Fuel (ATF) prices this quarter over Q3.

Having similar outlook Motilal Oswal in its research report saud that the company is likely to report revenue of Rs 49.5 billion in Q4FY17 with growth of 21% on y-o-y and flat on q-o-q basis. The Earnings before interest, taxes, depreciation, amortization, and restructuring or rent costs (EBITDAR) is looked at Rs 10.8 billion, down by 28% on y-o-y basis and 22% drop on q-o-q basis.

Moreover, ICICI Securities said, bulk of the domestic passenger growth has been captured by IndiGo which is expected to register a passenger growth of 31% based on 25% increase in capacity in Q4FY17 on a Y-Y basis. This is also aided by stronger passenger load factor (PLFs) of IndiGo at 90%/88% during January/February.