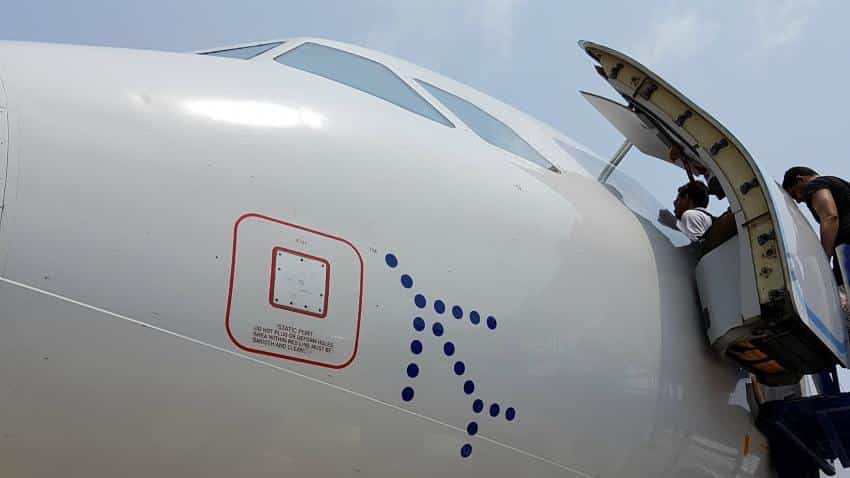 Passengers on board a Delhi bound IndiGo flight from the Bihar capital on Friday evening had a narrow escape after the plane`s "engine caught fire" while taxiing for take off and the aircraft suffered a tyre burst when the pilot applied the emergency brakes, officials said.

The flight, IndiGo 6E 415 had 174 passengers and nearly a dozen crew members on board. All of them were unhurt and evacuated soon after the tyre burst.

Some VIPs were in the flight, including Union Minister Ram Kirpal Yadav, senior BJP leader and former Deputy Chief Minister Sushil Kumar Modi, BJP`s ally RLSP MP Arun Kumar. They were going to attend the midnight launching of the GST in Delhi.

According to an airport official, soon after the pilot started the plane for take off, the "engine caught fire". "The pilot was forced to use the emergency brakes and the tyre burst on the runway itself," the official added.

He said a major accident was averted as the pilot exhibited presence of mind.

IndiGo officials informed the airport that due to some technical problem the engine caught fire during take off.

The Patna airport director Rajender Singh Lahoria said that traffic at the airport will be normal soon.

IndiGo on Friday said that all 174 passengers on-board its Patna-New Delhi flight were safe after a "precautionary" evacuation was carried out after the budget passenger carrier`s aircraft rejected its take-off and smoke was observed in the cabin.

According to the airline, its flight 6E-508 (Patna-Delhi) was involved in a "low speed reject" due to suspected engine stall.

The rejected take-off is a manoeuvre performed by the flight commander to discontinue take-off after the engines thrust has been initiated and the aircraft starts rolling for the take-off.

"As smoke was observed in the cabin by the crew, captain elected to evacuate due to precautionary reasons," the airline said in a statement.

"All SOPs (standard operating procedures) were carried out efficiently. Evacuation was completed in 60 seconds. There was no tyre burst or engine fire. Matter has been reported to DGCA proactively. An internal inquiry has also been initiated."

The airline said that there was "no technical snag" reported when the aircraft arrived at Patna.

"We will be operating a ferry flight from Delhi to Patna to pick up stranded passengers," the airline added.