Rajesh Mishra, Director, Symphony Limited, speaks about his expectations in time to come, international presence, market share between the organised and unorganised sector among others during an interview with Zee Business. 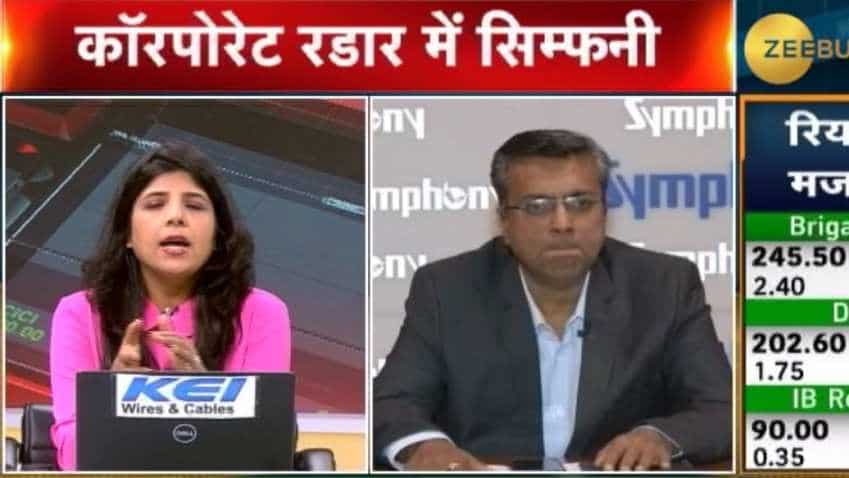 Rajesh Mishra, Director, Symphony Limited, spoke about his expectations in time to come, international presence, market share between the organised and unorganised sector among others during an interview with Swati Khandelwal, Zee Business. Excerpts:

Q: India is a consumption-based economy and there is a rise in per capita income in the nation. What kind of demand do you see in the coming years?
A: We are quite confident that the demand will go up in time to come. As there is an increase in the per capita income and prosperity and on the other hand, global warming is increasing the temperature, i.e., the temperature is going up, due to which there is an increase in cooling products. So, a combination of the two suggests that our products will be in demand in the coming future.

Q: Do you think that this year’s sales will be better than last year’s sales?
A: Last year’s summer was a bad season for the whole industry as it was quite erratic in nature. Last year’s summer was not a consistent one especially in some parts of North, South and East India. It was hampered by rains and thunderstorms. Consistent summer is good for the industry because it boosts the sales, which didn’t happen. So, not only we but the whole industry has a hope that we will have a good summer this year. The expectation is backed by the stretched winters and historically we have seen that good winter is followed with a good summer. So, expectations are there but haven’t got any such indication till March. It looks as if there will be a delayed summer but are sure that it will come.

Q:  Let us know the area where you will be focusing more as in air coolers or air conditioners (ACs) and where you can grow more?
A: See, Symphony is completely into air coolers and within coolers, we manufacture residential cooler, commercial cooler and industrial coolers. We are functional in all three categories. We expect that the two segments, industrial and commercial cooler segments, which are in their starting phase will post good growth in times to come.  They will be posting better growth results than the residential cooler segment for the next few years.

Q: Your global presence is quite strong in certain countries like the US, China and Australia. Tell us about your international business and plans to take it ahead?
A: If you will see internationally than Symphony has made its presence felt in the international market and at present, we are exporting Indian made air coolers to 60 different countries. Apart from this, we have acquired three big companies in the past few years and they are:
•    It was 2009-10, when we acquired a big air cooler company in the US, named Impco International Metal Product Company that is based in Phoenix, Arizona. The company also has its manufacturing set-up in Mexico as well. So, the acquisition helped us in making our presence felt in North and South America.
•    After this, in 2015, we acquired a China-based air cooler company, Keruilai. The acquisition has helped Symphony to make its presence felt also in China.
•    In July 2018, we acquired Australia’s Climate Technologies. It is a famous air cooler company in Australia with a 35 per cent market share. It also has a presence in the US.

Now, Impco and Keruilai are profit-making companies although they were not in good health at the time of acquisition. We have achieved the turn-around from these companies and now they are working in a good manner.  Thus, the three acquisitions have helped us in making our presence felt in the US, China and Australia. Our manufacturing facilities are available in the US, Mexico, China and Australia. Besides, we are exporting our products into 60 different countries and are confident that we will post good results from our export market.

When it comes to Symphony, then low power consumption is the biggest USP of our products as our coolers consume power that is equivalent to the fan. So, the first-time acquisition cost of symphony products may seem little high among the organised sector but over the period, the consumer will get benefits of the low operating cost. In addition, he will get better quality and service.

Apart from this, several new brands have entered the air-cooler segment and I feel that they will take on the market-share of the unorganised sector, which will help in increasing the market share of the organised market. But, the conversion speed is a little slow but will speed-up in time to come.

Q: Also talk about the dealer inventory levels?
A: As far as inventory is concerned then I have informed you about the last summers, which was quite lukewarm, and didn’t go as per the expectations. The end of the summers led to the stocking of cooling products at all levels from manufacturing to dealer levels. So, inventory is present at trade level while it is minimal at few places. In short, it is not at such levels at which, we should be worried about as we have reached to the normal inventory levels. As far as dealer network is concerned then network expansion is a continuous process and we are working on it. More than, 20,000 dealers across the country are available with us at present and our coolers are being sold across the nation. But, in terms of dealers, we are constantly working to expand our network.

Q: Symphony is a debt-free company with a decent amount of cash in books. What are your organic and inorganic growth plans?

A: See, when it comes to inorganic growth then you will find that we went for three big acquisitions in the last 8-9 years. And, we will go ahead if we get some more opportunities where we find some synergistic acquisition. Under such a situation, we will use our reserves for the purpose but will not go for any mindless acquisition.