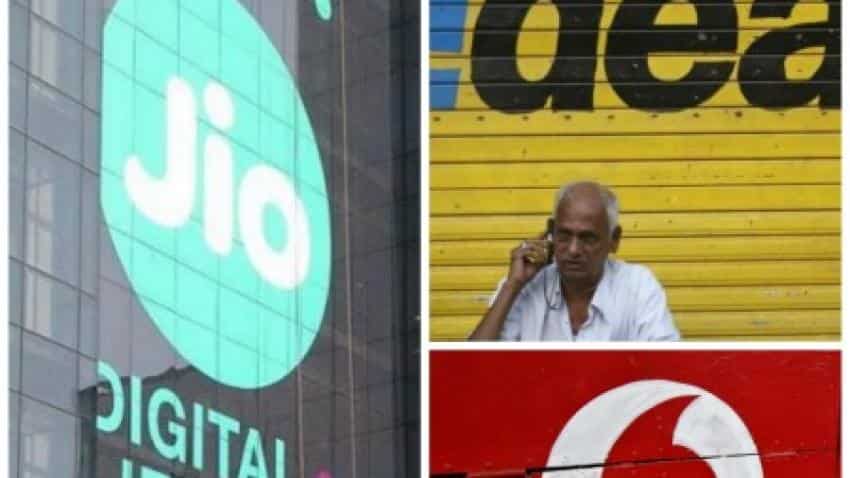 On December 1, Mukesh Ambani took centre stage as he announced the extension of the free data offer to the next year. (Photo Collage). Image Source: IANS/Reuters
RELATED NEWS

Telecoms have rolled out the welcome wagon of attractive data offers once again to compete with early rival, Reliance Jio, who ahead of 2017 declared its ‘Happy New Year’ offer.

The offer extended its inaugural free voice and data plan launched at the beginning of September 2016 to 31 March, 2017.

Shortly after the new year kicked off, on January 17, Vodafone announced a deal for its prepaid 4G users with ‘four times the data benefits without raising the prices of the data recharge packs.’

The company said that for 1GB of data customers would have to pay Rs 150 for one month and Rs 1,500 would offer 35GB data in a month.

It was Vodafone that proposed users of new 4G smartphones 10GB of data, for the price of 1GB, last month.

The company had released a recharge pack ranging between Rs 144 and Rs 149, depending on the telecom circle, for unlimited local and STD calling in December.

Two days after Vodafone, Idea announced its latest offers on January 19 that prepaid customers would be privy to once they bought the new 4G smartphones on Flipkart.

Idea customers buying new 4G smartphones on Flipkart would be offered 15GB data at the cost of 1GB, the company said.

Consequently, Idea’s 1GB data pack is much cheaper than Vodafone’s; however, the higher GB plans at Vodafone were far less than Idea’s 15GB plan.

By the second week of December, Idea had launched its Rs 148 plan and Rs 348 plan for unlimited voice calling across the country.

RJio had received a lot of criticism from the telecom operators and faced heat from the Telecom Regulatory Authority of India (TRAI) as Airtel and Idea approached the telecom dispute tribunal for allowing Mukesh Ambani-led Reliance Jio to continue free promotional offer beyond 90 days.

On December 1, Mukesh Ambani took centre stage as he announced the extension of the free data offer to the next year.

Ambani said that the earlier 4GB of free data a day would be replace with 1GB free data per day with allowing users to recharge data and speed.

RJio clarified to TRAI that the Happy New Year offer was different from the inaugural Welcome Offer launched in early September.

Back in December many other telecoms like Airtel, BSNL and Tata Docomo also launched a slew of deals on data packs.

Within the first month of its entry, RJio had made it to the top 10 competitors list in the telecom sector and as of November 29, the company claimed to have 50 million subscribers.