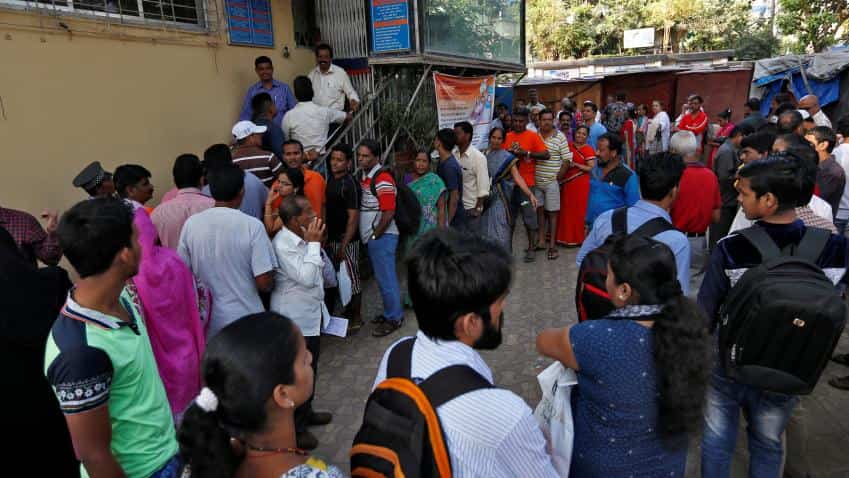 People queue outside a branch of Bank of India to deposit 500 and 1000 Indian rupee banknotes in Mumbai. Image Source: Reuters
Written By: ZeeBiz WebTeam
RELATED NEWS

After banks announced extended work timings for November 10 and November 11, people woke up early Wednesday morning to queue up in front of them to exchange their old currencies.

Chaos struck as banks opened gates to customers after being shut yesterday. People were waiting in line for over two hours on low availability of forms in the banks for exchange of Rs 500 and Rs 1,000 notes, ANI reported.

People stood in line outside the Reserve bank of India (RBI) as well as other banks like ICICI, State Bank of India (SBI), Punjab National Bank (PNB) and Bank of India to exchange old notes of Rs 500 and Rs 1,000.

Large crowds gathered outside banks all over the country in the states of West Bengal, Gujarat, Bihar, Uttar Pradesh and metros - Kolkata, Delhi and Mumbai.

DLF Cyber Hub -people had started queuing up outside the bank and ATMs on Thursday morning @HTGurgaon @htTweets #CurruptionFreeIndia pic.twitter.com/iT0o7Q95Yf

“All scheduled and non-scheduled banks, including public, private, foreign, cooperative, regional rural and local area banks, will remain open for public on Saturday, November 12 and Sunday, November 13, 2016. Banks are advised to keep all their branches open on November 12 and 13, 2016 as regular working days for transacting all business. Banks may give due publicity about availability of banking services on these days,” RBI said.

The rush outside banks was following Prime Minister, Narendra Modi’s historic announcement to curtail black money that the two denominations were being made illegal tenders as of midnight November 8.