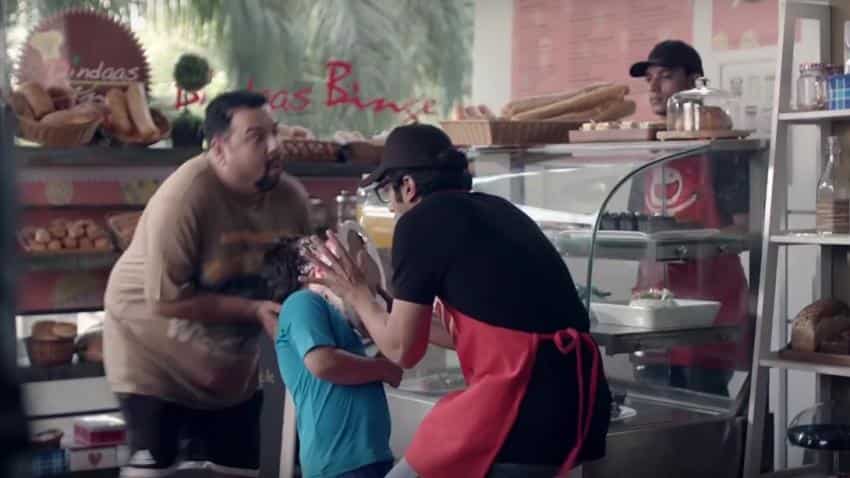 A still from the HP Inkjet ad where the Giridhar drops the cake on a boy. Photo: YouTube screengrab

Everyone may know a person close to them who is known as 'butterfingers'. Many of you may even identify yourself as that person. If you are then you will sympathize with the protagonist of this ad. The latest ad film by HP Deskjet uses a clumsy protagonist to bring out the message of spill free refill system.

The ad uses humor to narrates the story of ''Giridhar” a clumsy boy who drops everything he touches. From his childhood when he spills a bowl of gravy, to later on dropping a glass of water on his dad and even dropping a catch during a cricket match. He even has problem with the ladies as he ends up spilling food and drinks over his dates.

The most humorous moment of the ad films has to be the reaction of the father of the boy when Giridhar accidentally smashes a cake on a boy's face.

The only thing he manages to drop but not spill is the HP Deskjet ink refill, which comes to the relief of his father.

The ad film conceptualised by BBDO India captures the misfortunes of the protagonist 'Giridhar' in a very humorous way. The ad uses everyday instances in life where the poor chap has unluckily spilled whatever he has in his hand. The background score of the ad also acts as good support to it.

As for the product such as printer ink the idea of a safety cap for cartridge is definitely a good idea. This is as the costs of printer ink cartridges can be work out to be more expensive than the printer itself.

Overall the ad is combination of very good insight that was applied in the making of the ad and simple and clear execution. The brand definitely was not clumsy in the creation of this ad film.