Just moments after PM Modi's demonetisation announcement Paytm jumped into action to come up with a marketing strategy that put them way ahead of other digital wallets. 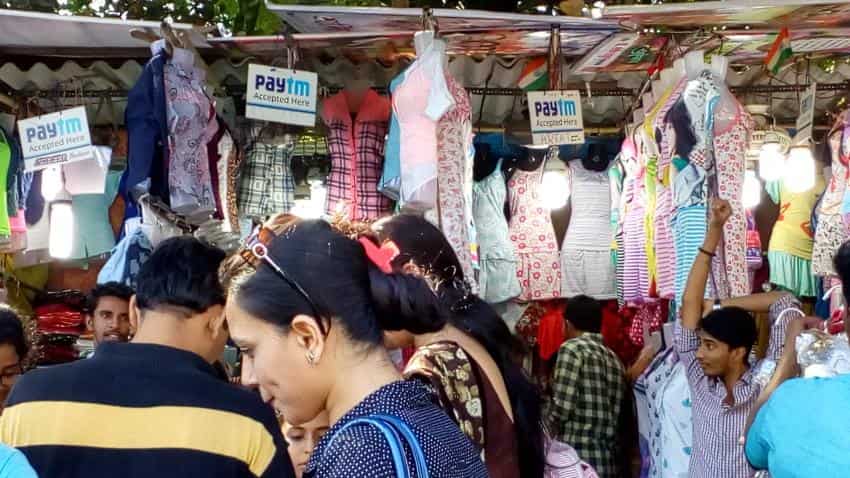 People doing some roadside clothes shopping on a street in Mumbai with vendors putting up signboards of Paytm payments being accepted. Photo: Zeebiz Webteam

On the night of November 8, 2016 Prime Minister Narendra Modi announced the decision to demonetise old Rs 500 and Rs 1,000 notes. While everyone was rushing to ATMs to withdraw whatever Rs 100 notes they could get their hands on, Paytm rushed to their ad and media agency to create and place an ad on the front pages of all leading publications congratulating Prime Minister Narendra Modi on the decision and with a play of word in its tagline to 'Ab ATM nahin, #Paytm karo'. 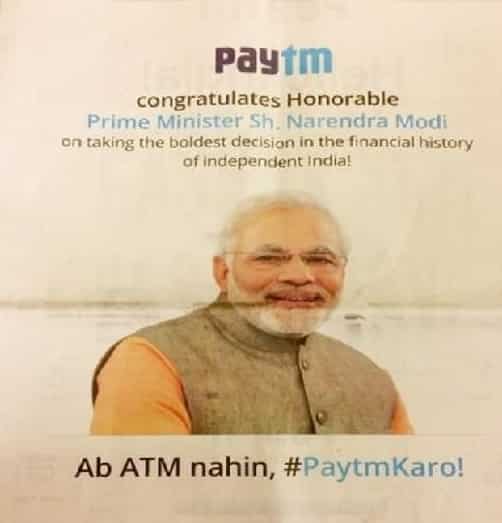 From then on the company has gone into a marketing overdrive not only to gain eyeballs but the trust of people in conducting payments using its app. While Paytm was just a little ahead of competitors Freecharge and MobiKwik prior to demonetisation, it rapidly surged ahead of others after. In some ways it came to even become the face of cashless transactions in India.

Today, it is not uncommon to see the Paytm sticker or sign board even with the local vegetable vendors or your grocery store down the road.

Speaking to the Zeebiz team Sudhanshu Gupta, Vice President, Paytm said, “We have launched a 360-degree media campaign that includes heavy advertising in national print, television, radio and web-based media. Multiple creatives have been introduced in the market as our brand is extremely topical to the current situation.”

The growth of Paytm can be seen in the traffic and transaction numbers on the first two days itself. It had a 435% increase in traffic on day one itself and offline payment transactions increased by 400%. Even the transaction amount has increased by 200% of the average ticket size.

“Since demonetisation, we have witnessed a 3x surge in overall traffic and added more than 20 million users - 170million wallets now. During this period, we also set ambitious targets in merchant on-boarding and reached more than 1.5 million offline merchants from the earlier 850,000 merchants earlier within 1.5 months,” said Gupta.

The large marketing campaign means a large increase in its ad spends. Paytm had allocated Rs 600 crore for branding and marketing in 2016-17. However, it definitely seems like the brand has increased its marketing spends once demonetisation kicked in. The company did not say how much they had increased their marketing spends, however Gupta said, “At Paytm, we are committed to invest as per the demands of the market to ensure sustained and significant media presence for Paytm across print, broadcast and digital media.”

Also read: Brownie points to backlash: When brands get it wrong in supporting govt initiatives

Apart from the print ads which it rolled out post demonetisation, the company along with its agency McCann Delhi rolled out a TV campaign called 'Drama band karo, Paytm karo' on November 12. The campaign however was tweaked to 'Chinta nai, Paytm karo' by the company after it received backlash on social media.

However, it looks like the marketing campaign of Paytm has been paying off as it has surged ahead of competitors Mobikwik and Freecharge in terms of users. As of December 23 on Google Play, Paytm had 50 million to 100 million users install of its app, while MobiKwik and Freecharge has 10 million to 50 million installs and another 50,000 to 100,000 installs for its MobiKwik Lite app. Paytm's seller app installs have also grown to 500,000 to 1 million.

While Paytm claims to have over 150 million users, MobiKwik has 45 million users and Freecharge as of November end had announced that it had crossed over 10 million active users.

This shows Paytm's huge leap ahead of competition after demonetisation. The brand even tried to push its users to grow its acceptability by putting up print ads which gave instructions to users how to teach your neighborhood kirana store to accept Paytm and encouraged them to stick a cut out of 'Paytm accepted here' on the shop.

The company had also put their spends in offline marketing as they announced the hiring of 10,000 agents to expand its offline merchant network to over 20 lakh touch-points by the end of the current fiscal.

“We are putting a lot of efforts on offline marketing through way of commission marketing. With this we expect to get a lot of small vendors and retailer shops to use the digital payments system,” said Deepak Abott, Sr VP, Paytm to Zeebiz.

Paytm faces service outage due to sudden jump in users