Hero MotoCorp records the highest quarterly growth in Q1 FY18 as it registered a 13% growth in June. 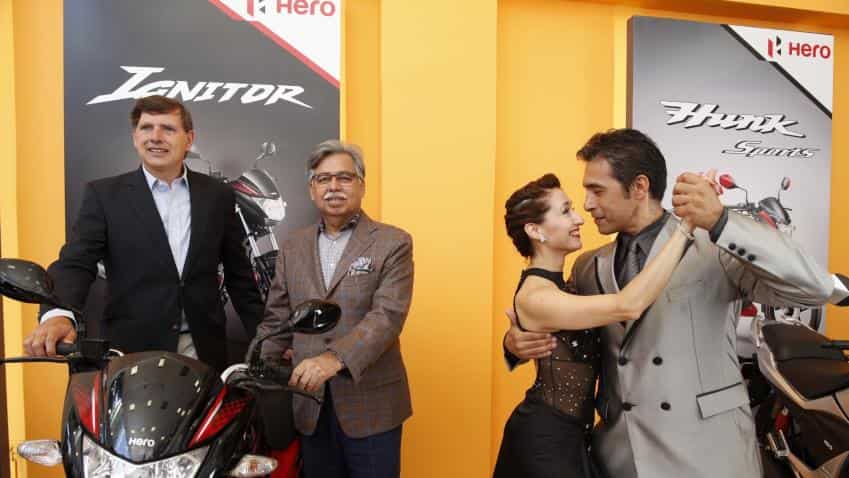 Pawan Munjal, Chairman and MD of Hero MotoCorp at the launch of a new bike. Photo: IANS
Written By: ZeeBiz WebTeam
RELATED NEWS

Hero MotoCorp on Monday announced that it registered the highest-ever sales in any quarter, the company sold 18.49 lakh units in first three months (April 2017 – June 2017) of this fiscal. The company’s previous highest quarterly sales was in the second quarter (July-September) of FY16-17, when it sold 18.23 lakhs units.

Hero MotoCorp has clocked such robust volumes in the month of June on account of strong growth in both motorcycles and scooters, said the company.

Motorcycle segment volume growth was supported by the wedding season and the very successful in-market activations for Hero's portfolio of trusted brands including Glamour, Splendor, Passion, HF Deluxe and Achiever.

Scooters have gained volumes driven by the very effective ‘360 degree’ Go-To-Market programmes along-with the introduction of new upgrades and refreshes earlier in the quarter.

Hero MotoCorp has welcomed GST as a game-changing tax reform in the country.

The company has passed on the benefit of GST to its customers with a reduction in the prices of models across its product portfolio in most of the states w.e.f. July 1, 2017. The quantum of reduction ranges from Rs 400 to Rs 1800 on mass-selling models.

The actual benefit varies from state to state, depending on the pre and post-GST rates. Some of the premium segment models see a reduction of up to Rs 4,000 in certain markets. In one or two states, such as Haryana, where the pre-GST rates were lower than the post-GST rate, the prices of a few models have gone up marginally.