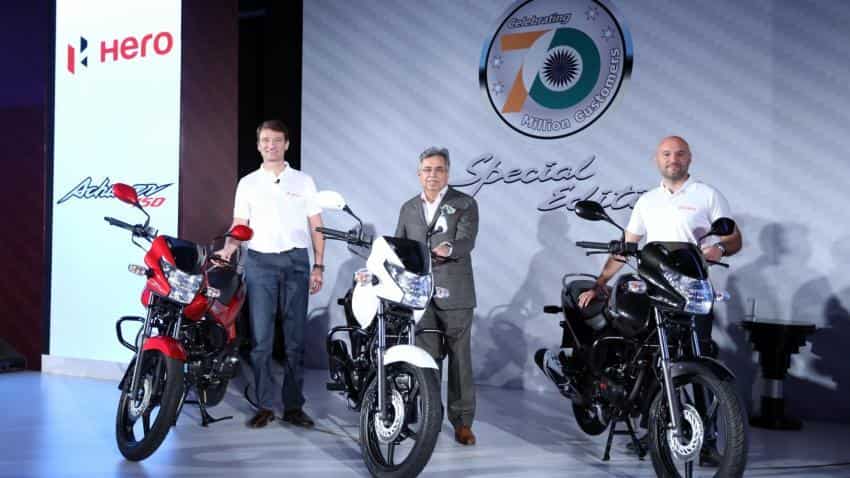 One of the largest two-wheeler manufacturers Hero Motocorp surpassed analysts estimates by reporting a whopping 35% rise in standalone net profit during the fourth quarter ended March 2018 result. The company registered net profit of Rs 967.4 crore which was up by 34.78% from Rs 717.75 crore in the corresponding period of the previous year. Q4FY18 net profit also witnessed growth of 20.11% versus net profit of Rs 805.43 crore in the preceding quarter. A Bloomberg poll of analysts had estimated Hero’s net profit at Rs 958 crore in Q4FY18.

Pawan Munjal, Chairman, Managing Director & Chief Executive Officer, Hero MotoCorp Ltd, said, “The fiscal year 2018 proved to be yet another year of record performances and landmark achievements – be it domestic sales, global expansion or in the field of research & development, manufacturing excellence and technological innovations at Hero MotoCorp and its alliances."

Munjal said, “ The Company posted record sales numbers throughout the year, the first ever global 2-wheeler company to record well over 7.5 million unit sales in the period and registered highest-ever monthly sales in India (730,473 unit sales in March 2018).”

Talking about ahead, Munjal highlighted saying, “Hero MotoCorp, a company strongly driven by customer preference and technological innovation, recognised the growing future environmental demands ahead of its times, and thus have made strategic investments in the electric vehicles segment."

He added, “Development is underway on the strategic priorities of engaging with the external ecosystem, including start-ups in a meaningful way. As part of this focus, Hero MotoCorp has made an investment of Rs. 201 crore in Ather Energy to acquire about 30% equity. Ather will soon start retailing its smart electric scooter S340.”

Munjal even spoke about it’s upcoming models. He said “Another big leap, catering to popular customer demand, Hero MotoCorp, marked its entry in the premium motorcycle segment as it unveiled India’s first 200cc motorcycles – ‘XPulse’ and ‘Xtreme 200R’ , at Auto Expo 2018. The sales will begin in FY ’19. At the same time, we will continue to build and explore new age technology solutions to be future ready”