There was an even bigger surprise which was the announcement that the management saying that there was no merit on the allegations of wrongdoing after reviewing the earlier investigations on the Panaya acquisition. 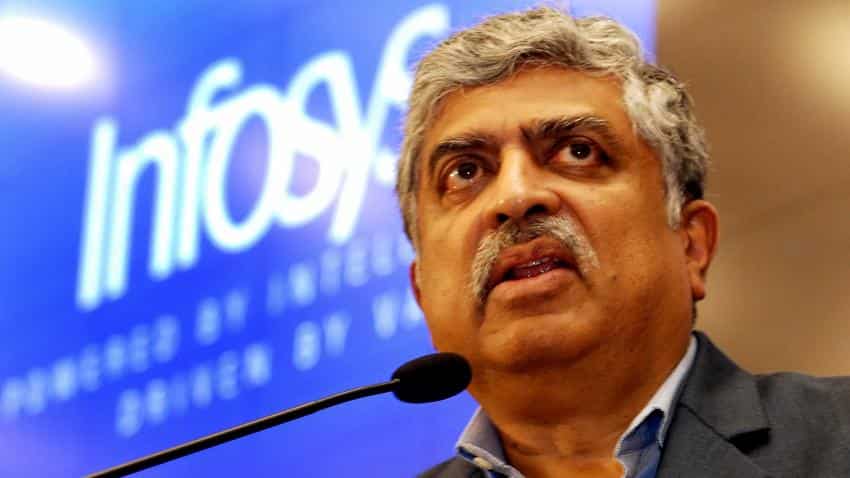 Infosys Non-executive Chairman Nandan Nilekani addresses during the announcement of the 2nd quarter results of the Infosys at the headquarters in Bengaluru on Oct 24, 2017. Photo: IANS
Written By: ZeeBiz WebTeam
RELATED NEWS

This comes just after the recent issues the company has been suffering since the former CEO Vishal Sikka quit and so did the chairman R Seshasayee following the accusations made by Infosys founder Narayan Murthy. It was only a few weeks later that Infosys appointed Nandan Nilekani back at the helm as the newly appointed non-executive chairman.

The surprising part of Infosys' result announcement was that despite this robust growth during their most turbulent time, the company lowered its annual revenue guidance for fiscal 2017-18 in dollar and rupee terms.

In constant currency, revenue is projected to grow 5.5-6.5%.

This lowering of its revenue expectation comes as a disappointment as the cut is much steeper than expected.

There was an even bigger surprise which was the announcement that the management saying that there was no merit on the allegations of wrongdoing after reviewing the earlier investigations on the Panaya acquisition and the severance payment to the former CFO.

This was the main issue which had resulted in Sikka and the top management of the company quitting the Infosys in August this year. In fact, the Murthy had even raised questions regarding the corporate governance of the company.

The quick investigation by the company and Nilekani's statement is expected to put the clamour of corporate governance to rest.

Sikka's resignation in August had wiped off over Rs 22,500 crore from Infosys' market cap. The share price of Infosys touched a four-year low of Rs 884.40 per piece – a level which was last seen on August 21, 2014.

So with the new investigation of the company showing that there was no foul play in the Panaya deal, it opens up the question on what was the reason behind Murthy's attacks on Sikka which caused the whole issue to blow up.