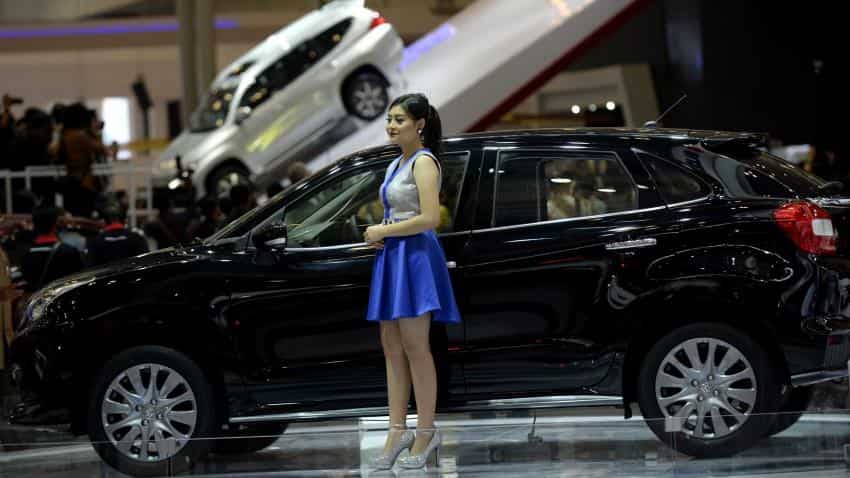 A woman stands besides a car at an auto show. Photo: IANS

A good monsoon and 7th Pay Commission bounty shored up hopes of automobile companies. However, they were in a rude shock.

Even two-wheeler manufacturers Hero MotoCorp and Bajaj Auto posted a 6% growth and a 0.3% decline in sales, respectively, during the month.

So what changed for automobile sector who in September 2016 saw a mammoth 20% sales increase?

An automobile analyst, who wished not to be quoted citing company policy, said that the festival season this year has to be blamed. He said that festive season started late last year and that resulted in a low base effect from the same month in 2014.

He said that dealers in September last year had an inventory build-up that resulted in higher sales during the month.

Similarly, an IDBI Capital report said that given the festive season was 10-14 days early, September 2016 sales saw a low base effect, while October ‘16 saw a high base effect.

What this simply means is that customers bought the cars and bikes they were planning to in September itself.

This was seen as in September sales of cars rose by a large 20% as total passenger vehicle grew to 2,78,428 units during the month from 2,32,170 units in the same month last year, according to data from Society of Indian Automobile Manufacturers (SIAM).

Two-wheeler companies too saw massive growth as manufacturers such as TVS Motor's sales grew by 33.6%, Honda Motorcycle and Scooter reported a 31% growth in sales, Hero MotoCorp too saw an 11% jump in sales.

The analyst further added that the sales volume growth could be clearly seen if we look at it in terms of a quarter. However, he did add that it automobile sales have not met their expectations.