Passenger vehicles sales in November of many automobile companies saw a double-digit growth despite the demonetisation impact. Cars pilled up on the highway. Photo: Reuters

Sales figures of many automobile companies during the month of November seemed to have dodged the demonetisation bullet. Carmakers like Maruti Suzuki, Toyota, Tata Motors Volkswagen and Renault have posted double-digit growth when analysts expect severe contraction due to demonetisation.

As per the numbers made public by carmakers, domestic sales in November 2016 rose 4%, at 1,92,005 units. This came despite reports of a decline in sales of automakers after demonetisation which was announced by the government on November 8. 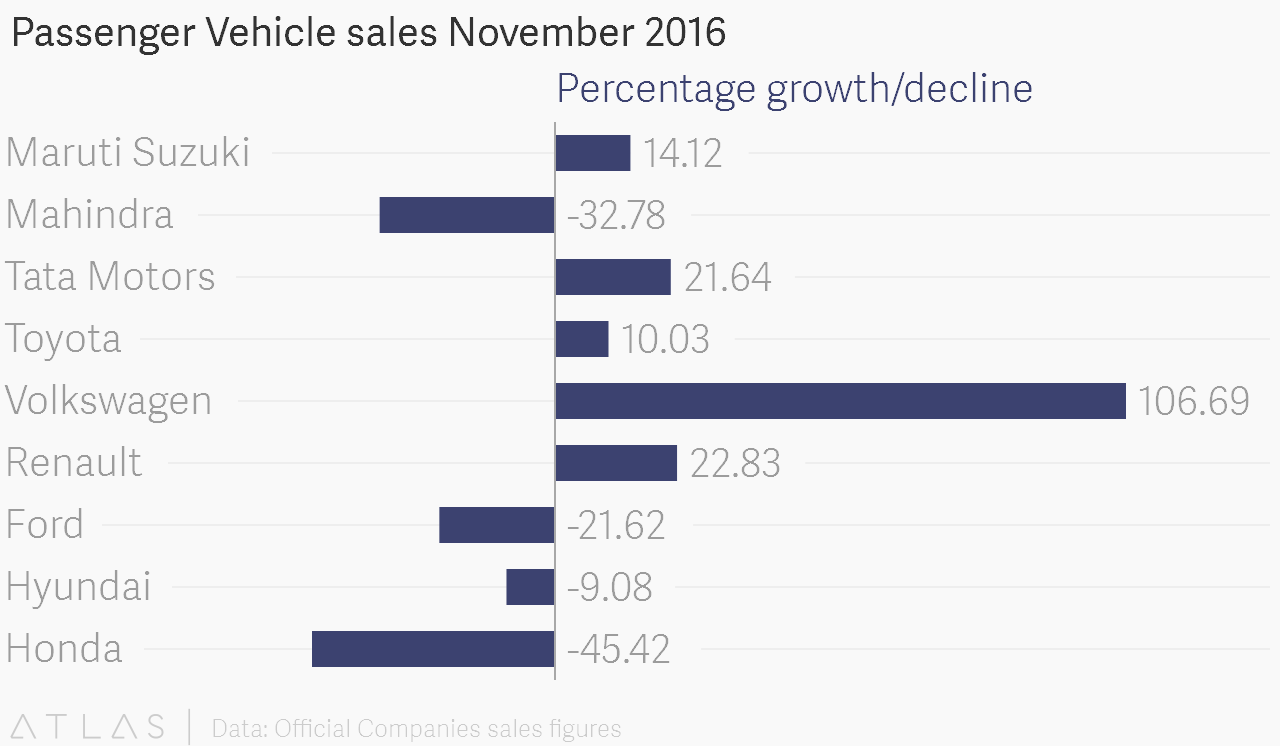 Volkswagen India reported an over two-fold increase in sales at 4,014 units in November. It had sold 1,942 units in the same month last year. Similarly, Renault reported sales of 9,604 units last month, up 23 % from 7,819 units sold in November last year.

Many experts had estimated an over 30% decline in automobile sales and the Federation of Automobile Dealers Associations (FADA) expected as much as a 30% drop in retail sales in November due to demonetisation.

How can then one explain the double-digit growth in car sales?

According to automobile analysts, the reason is inventory.

“The figures from the dealerships to the customers would be much lower as fewer customers have been walking in. The demonetisation impact will be reflective in the next month's figures,” said the analyst.

Another analyst pointed out that apart from the passenger vehicles (PV) sales of some companies which has seen a good growth, two-wheelers and commercial vehicle (CV) sales have seen a huge decline in sales. Even in PV sales Mahindra, Hyundai, Ford and Honda reported a large decline in sales.

In CV segment Tata Motors posted a 17% decline in sales, while VE CV (JV between Eicher and Volvo) saw a 13% decline in sales. Among two-wheelers Hondo Motorcyles & Scooters posted a 0.31% decline, TVS posted a low 0.63% growth and Hero MotoCorp sales plunged by 13% in November.

“The sales figures reported of passenger cars are wholesale numbers. For passenger vehicles the sales are always good during the festive season. As a result the dealers order more during the subsequent months to beef up the supply at the dealerships,” said the second analyst Zeebiz spoke to.

He further added that financing of passenger vehicles is mostly done through loans and cash is not a problem. However, for two-wheelers the sales is dependent on cash, especially in rural areas.

He further added, “For commercial vehicles, the price being at a much high price point has resulted in the demand declining when demonetisation hit. Also CV sales are depended on rural sales and fleet owners which use cash in acquiring.”