Here's what TCS, Infosys and Wipro's poor Q1 performance say about the future

After Infosys, Wipro on Tuesday registered disappointing result for the quarter ended  on  June 30. 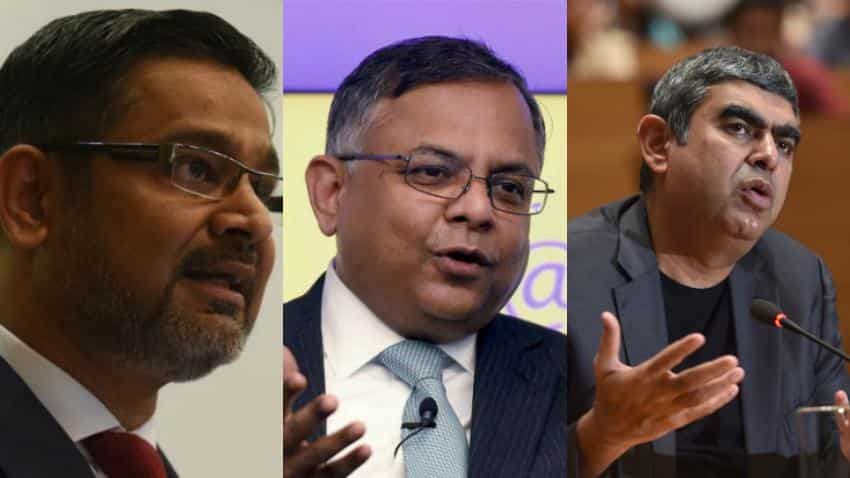 TCS had said that the company will focus on any impact from Britain's decision to exit European Union. Photo: IANS and PTI
Written By: Hitisha Jain
RELATED NEWS

Wipro's decline in net profit goes beyond hike in wages

It was a dull start of the earning season this quarter as the IT companies registering weak results have become a matter of concern for the sector.

After Infosys, Wipro on Tuesday registered disappointing result for the quarter ended on June 30. The company's consolidated net profit for the given quarter declined by 6.7% to Rs 2,059 crore as against Rs 2,207.4 crore in the same period of last year.

Though the results were in line with the estimates, the researchers cautioned investors as the company's future earnings may have Brexit impact in the short term.

Like ZeeBiz earlier reported that Antique Stock Broking's analyst Omkar Hadkar in a note said, "We are cutting our US dollar revenue growth for FY17/FY18 to 9%/10.3% from 10%/11.1% earlier to factor in the weaker GBP and EURO against US dollar and uncertainty macro environment, leading to a 2%/2.5% cut in our FY17/FY18 EPS estimates".

Following TCS, Infosys results gave a big jerk to shareholders so much that the shares of the company plunged nearly 10% post the result announcement. The company reported consolidated net profit of Rs 3436 crore, a decline of 4.5% for Q1FY17.

Looking at the weak financial numbers, Infosys said that it will not be possible for them to achieve the previous set target and hence, cutting its revenue outlook.

During a conference call, Vishal Sikka, CEO, Infosys said that now the company expects revenue growth between 10.5%-12% as against previous estimate of 11.5%-13.5% for the current fiscal year.

On the other side, the third IT major company, Wipro, on Tuesday attributed the fall in margins and effectively net profit to wage hikes and headwinds in its India and Middle-East business.

Wipro CEO and Member of the Board, Abidali Z Neemuchwala said, "We expect the trajectory of growth to build gradually over the course of the year. We will drive operational improvements in Q2, but we may not see the full benefits because there are two additional months of merit salary increases that will come into effect".

TCS had said that the company will focus on any impact from Britain's decision to exit European Union.

According to a Reuters report, United Kingdom accounts for 14.8% of TCS' revenue, while the rest of Europe contributes 11.5%.

TCS Chief Executive N. Chandrasekaran said, "Based on anything I've heard from any client, I don't have any negative input at this point. Having said that, we need to watch how Brexit plays out, how companies react, especially financial institutions".

While, Infosys feels that Brexit is an opportunity as it will bring in more transparency in the long term. But, the company will remain cautious in the short term.

According to a Reuters report, the company gets about 23% of its revenues from clients based in Europe, the lowest among peers including TCS and Wipro.

"Banks are trying to figure out what changes need to be made and what it means for near-term spending... Unfortunate as it is that some of these walls are being created due to Brexit, it does create more need for services, integration, more need for ways to interact across boundaries. So, it means opportunity for revenue growth", Sikka said.

However, Wipro forecasted muted revenue growth in the second quarter, the company warned that Brexit could lead some customers to defer business over the medium term, Reuters reported.

During the conference call, management indicated that the Brexit will not have any immediate impact on company’s business. The board did not rule out the possibility of softness in European Financial services vertical. Besides, management indicated that the Brexit uncertainties do not bode well for recovery in Energy and Utilities vertical demand outlook going ahead.

For TCS, Ashish Chopra and Sagar Lele from Motilal Oswal Securities said, "Our target price of Rs 2,650 discounts FY18 EPS by 17x, and implies 5% upside and we maintain 'Neutral' position on TCS.

But, for Infosys, Nirmal Bang Institutional Equities cut down the revenue estimates and retained 'Sell' rating with a March 2017 target price of Rs 988.

While for Wipro, Manik Taneja from Emkay said, "Wipro remains in the midst of a difficult transition in a volatile demand environment which could continue to put further pressure on FY17 financials. Retain HOLD with a revised TP of Rs 535(V/s Rs 580 earlier), based on 13x FY18E EPS (V/s 14x earlier).

Wipro's decline in net profit goes beyond hike in wages

PPF Alert: Know returns on this Small Savings Scheme; See how you can get it

Futures trading to be permitted in petrol and diesel soon? Check this big development