Infosys Board members during its recently held 36th AGM in Bengaluru on Saturday spoke on range of issues right from automation, corporate governance, compensation packages to layoffs and hiring plans in India. Find out, what are 7 key things Infosys' board said in its recent annual general meeting. 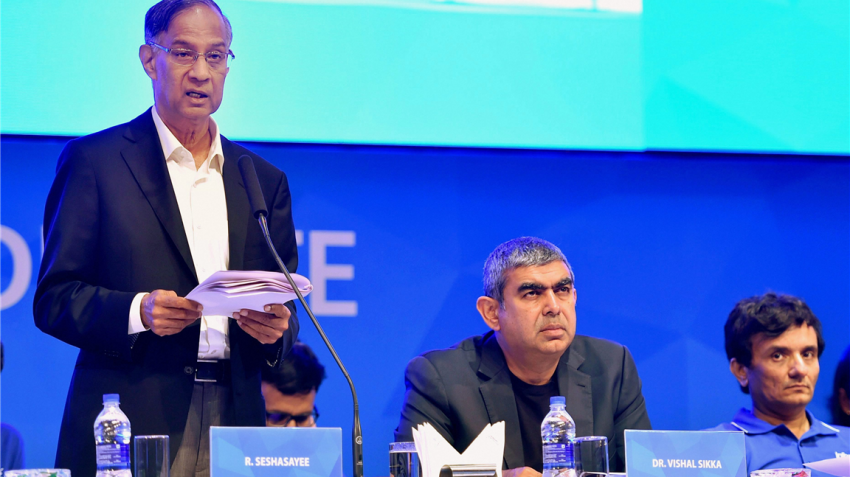 1. Infosys' executive chairman R Seshasayee has said that the board shares cordial, direct and respectful relationship with its founders

2. The company's CEO Vishal Sikka told investors that for every job created in the US, an additional job will be available in India

3. Its revenue per full-time employee (FTE) increased by 1.2% as a result of automation, utilisation and productivity improvements, cited Infosys in its annual report

Infosys in its recently held 36th Annual General Meeting (AGM) said the company's board hold no rift with its founders on corporate governance and compensation paid to executives adding that the problem occurred due to inaccurate media reports.

The homegrown IT services major had conducted its 36th AGM at Christ College in Bengaluru in Karnataka on Saturday.

For the first time in several years, Infosys AGM saw absence of its co-founders including N R Narayana Murthy, according to IANS report.

“None of the founders or promoters was seen at the AGM, even a hour after it began at 3:00 pm. We have no idea why they did not turn up,"  IANS reported quoting a company spokesman, as saying.

Murthy's absence from the company's AGM surprised many investors.

"It is surprising not to see Murthy at the AGM as he used to sit in the front row after demitting office for the second time in 2014. Former directors T V Mohandas Pai and V Balakrishnan, who were regular at the AGMs over the years, are also not to be seen," IANS reported quoting old-time investor Ramana Reddy from Bengaluru, as saying.

ALSO READ: Infosys investors blast board over 'infighting' with founders

Here are 7 key things Infosys' board said during its 36th AGM:

Since last few months, Infosys has been into the news for corporate governance and paying high compensation to its CEO Vishal Sikka, COO U B Pravin Rao and severance package to former CFO  Rajiv Bansal and general counsel David Kennedy and its founder Murthy has also been vocal about it questioning the board about pay packages paid to senior management employees.

"Executive leadership compensation was an issue that dominated the narrative on governance. The Board has, in the spirit of further transparency, released a document, explaining in detail the policy on executive compensation, the key performance indicators for variable pay and related matters on the company`s website and in the annual report," IANS reported quoted Infosys Board executive chairman R Seshasayee, as saying.

Infosys' speaking on CEO Sikka's compensation in its 36th AGM report of 2016-17 has said, “Following the shareholders' approval of the CEO's compensation through a postal ballot on March 31,2016, and based on fiscal 2017 performance, the Board, in its meeting held on April 13,2017, granted performance-baed equity and stock options for fiscal 2017 to the CEO.”

“The remuneration and perquisites provided to our employees, including that of the management, are on par with industry benchmarks. The nomination and remuneration committee continuously reviews the compensation of our CEO, COO and other key managerial personnel (KMP) to align both the short-term and long-term business objectives of the company and to link compensation with the achievement of goals,” Infosys further said in its annual report.

Here's look at compensation Infosys paid to whole-time directors and other key managerial personnel (KMP) as on March 31, 2017:

2. On Relationship With Infosys Founders:

Infosys board member and executive chariman R Seshasayee has said that the Board shares cordial, direct and respectful relationship with the company's founders.

"I should note that the Board`s relationship with the Founders is often the subject of certain inaccurate media reports. When the Board communicates with the Founders, it does so directly, cordially and respectfully," IANS reported quoting Infosys executive chairman and board member R Seshasayee as saying to shareholders at the company`s 36th AGM.

"I believe the relationship between the board and the founders is good and I am confident that it will continue to improve,"  cited PTI report quoting Infosys co-chairman Ravi Venkatesan, as saying during the AGM.

“At Infosys, the Board of Directors (the Board) is at the core of our corporate governance practice. The Board oversees the management's functions and protects the long-term interests of our stakeholders," cited  Infosys in its annual report 2016-17. 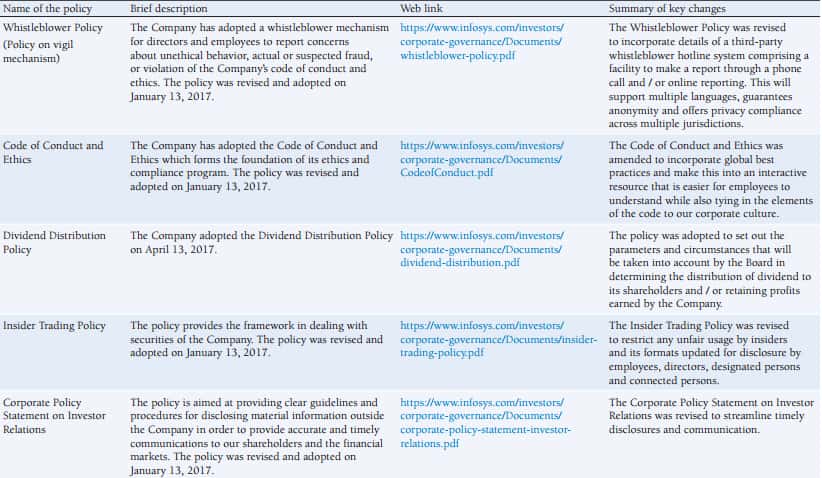 According to Reuters report, Infosys Chief Executive Officer Vishal Sikka had said earlier that the IT services company was likely to struggle to reach its ambitious $20 billion revenue target by 2020 due to a challenging market environment.

Infosys' R Seshasayee during the AGM has said that achieving the 2020 goal seems daunting and the company is re-evaluating its long-term goals.

"The 2020 goals certainly appear daunting in the timeframe in which these goals have been talked about because of the kind of headwinds and the shift in marketplace that we have seen," Reuters reported quoting R Seshasayee as saying during his last annual meeting before his planned retirement in May next year.

"But we are re-evaluating our long-term goals," he added.

The company crossed $10 billion in revenue at the end of fiscal 2017, cited the PTI report.

ALSO READ: Infosys pays $1 million for 'visa abuse' in US

5. On Layoffs and Hiring

There have been media reports in the past few months on Infosys laying off employees due to emergence of new technologies. However, the company in its 36th AGM has denied such layoffs and stated that it will be hiring employees in the current fiscal.

Infosys' Sikka told investors that the company was not laying off any employee.

"No layoffs in our company. On the contrary we are hiring this year (2017-18) too," IANS reported quoting Sikka, as saying to investors during the AGM.

Clarifying that hiring about 10,000 people in the US over the next three years would not be at the cost of recruitment in India, Sikka said for every job created in the US, an additional job will be available in India, the report said.

Infosys' Board during its 36th AGM has said that due to emergence of new technology like automation the opportunities for the company is two-fold and the technology has increased the revenue per full-time employee by 1.2%.

"The rapid digitisation of everything around us is disrupting entire industries in an irreversible and profound way. As this revolution accelerates, the opportunity for us is two-fold,” IANS reported quoting Infosys' chairman R Seshasayee, as saying.

"First, to bring automation and software-led efficiencies to the core of our traditional services, whilst rapidly learning to imbibe new technologies and innovation. Second, to do the same for our clients as we partner with them through their digital transformation,”  Seshasayee said.

"Revenue per full-time Employee (FTE) increased by 1.2% as a result of automation, utilisation and productivity improvements. Automation itself released about 11,000 FTE worth of effort through the year, a clear demonstration of how software is going to play a crucial role in our business model," Infosys said in its annual report.

7. On Transformation At Infosys

For sustainable and secure future, Infosys has said that it is undertaking three transformations in the company namely business transformation, cultural transformation and transition to independent board.

"We are undertaking three transformations simultaneously for a sustainable and secure future for your company,"  IANS reported quoting Board executive chairman R Seshasayee as saying to about 1,000 shareholders at the AGM.

"The first is business transformation from a traditional IT services to an innovation-led software-plus services company, which is formidable enough; second the cultural transformation that comes along when you induct global leadership talent; and third, the abrupt transition from the promoter-led Board to an independent Board," R Seshasayee further added.

ALSO READ: No proof of wrongdoing by company in Panaya deal, Infosys says