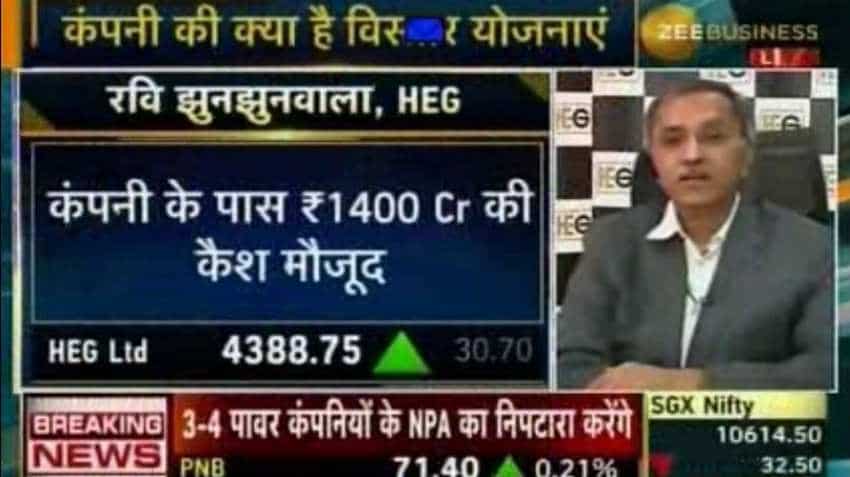 Ravi Jhunjhunwala says "HEG will be spending Rs 1,200 crore to expand its capacity by 20,000 tonnes in the next in three years". Image source: Zee Business
Written By: ZeeBiz WebTeam

Ravi Jhunjhunwala, CMD & CEO, HEG, speaks about HEG's capacity expansion plans, Capacity Utilisation and GE realisations during a conversation with Swati Khandelwal, Associate Editor, Zee Business. He says "HEG will be spending Rs 1,200 crore to expand its capacity by 20,000 tonnes in the next in three years". Edited Excerpts:

Q: HEG is a debt-free company with a strong balance sheet. Let us know about the cash that is available in the books of the company?
A: HEG's cash in the book stands around Rs 1400 crore.

Q: How are you going to fund the expansion plan?
A: The expansions will be funded internally as we have a cash of about Rs 1400 crores in our books at present and hope that an additional Rs 750 crore will be collected through the share buyback offer.

Q: Graphite electrode (GE) prices have risen fivefold. Do you believe GE realisations would sustain for a longer period?
A: It is a difficult question to answer but the market has sustained to the structural changes that occurred in the industry in the last 1.5-2 years. This is a technology-oriented industry and we were the last company to join it in 1976. The existing technology barriers have not allowed any other company to join the league since then, .i.e. 42-43 years ago. This means that this capacity and technology are limited to the existing 5-6 companies in the industry and any unforeseen event can only lead to some structural changes, which is hard to happen.

Q: What is your take on the Chinese policies that have been planned to curb pollution and limiting steel output? How it will benefit your sector?
A:  The changes are associated to the same as China has closed production of nearly 125-150 million tonnes of steel, which were made in the blast furnace or induction furnace. The production was shut down due to environmental concerns. The decision has halved their exports. Last year, their exports went down to 70 million tonnes from 125-130 million tonnes. Talks are there that it will come down to 60 million tonnes by end of the ongoing year.

This cut has allowed other countries to increase their production. Interestingly, 50% of this increased production is dependant on the electric furnace, where electrodes are consumed. This sudden demand can be met only by expanding the capacities, which was reduced by about 2 lakh tonnes in the last 3-4 years. I think every company engaged in the business will have to plan an expansion at there levels. The expansion of 20,000 tonnes, which will be met after three years, will not be enough to fulfil the demand and that is a reason that others will have to increase their capacities.

Q: Will higher availability of needle coke in near-term and Supreme Court's relief on the Petcoke ban will have an impact on your earnings in future?
A: The ban was never enforced on our needle coke. However, it was slapped accidentally on our Petcoke (petroleum coke) as the Supreme Court had the intention of banning sulphur Petcoke that had a contribution of 8%, 9% and 10% in the pollution but the coke available at HEG has a contribution of nearly 0.4-0.6%. In fact, the court exempted us from the ban on the very day when our plea was heard at the court. It means the ban was functional for just a month or so.

Q: What is your guidance on capacity utilization front for H2FY19?
A: It will stand between 85-90%.