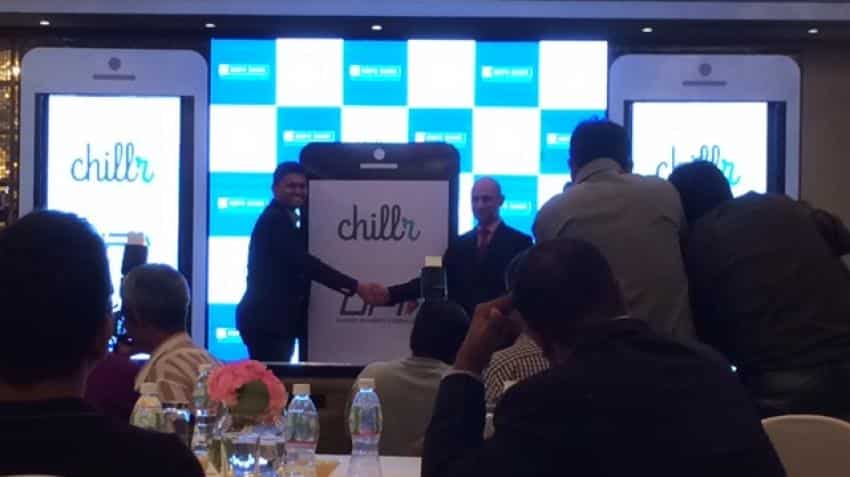 1. The transactions conducted on Chillr will go through HDFC Bank's UPI platform

3. After UPI's launch, Chillr's users base will expand as customers of over 33 more banks will be able to use it

4. Chillr is targeting a monthly transaction value of $1 billion and 10 million transacting users by the end of 2017

With an aim to achieve the government's vision of cashless economy and to provide smooth digital transactions, HDFC Bank on Friday announced the launch of Unified Payments Interface (UPI) on its multi-bank mobile payments banking app Chillr in Mumbai.

"The launch of HDFC Bank UPI on Chillr will benefit customers of 44 banks that will now be able to conduct digital transactions seamlessely using the Chillr app," HDFC Bank and Chillr said in a joint press release.

The transactions conducted on Chillr will go through HDFC Bank's UPI platform.

Commenting on the launch of UPI on its app, Chillr co-founder and CEO Sony Joy, said, "We are delighted to collaborate with HDFC Bank to introduce UPI on our app. HDFC Bank is the best partner bank a Fintech player can get. Together, we aim to disrupt not only the payments industry but also revolutionise other banking and financial services like credit, savings, insurance, investments and more."

"We were the first bank to partner with Chillr and with this launch, we are taking it to the next level," HDFC Bank's country head-digital banking Nitin Chug, said in a statement.

ALSO READ: Whatsapp to use UPI payments soon; here's how it may work

In March 2015, HDFC Bank had partnered with Chillr to launch the mobile money transfer app on Android and iOS platforms.

"Chillr has witnessed monthly transactions worth Rs 3,000 crore from HDFC Bank customers alone," Chillr's Joy said while speaking at the launch of the HDFC Bank's UPI platform on its app.

"With the HDFC Bank UPI on Chillr app, the start-up's base will expand as customers of over 33 more banks will be able to use it, in addition to existing 11 banks," Chillr said in a joint statement.

Chillr at present has monthly transaction value of over Rs 500 crore and has three million users on its mobile payments platform .

"With the launch of UPI, Chillr is targeting a monthly transaction value of $1 billion (nearly Rs 6,652.75 crore) and 10 million transacting users by the end of this year," Chillr said in a statement.