The award was accepted on behalf of the Bank by  Rahul Bhandari, Alt. Chief Executive, HDFC Bank, Hong Kong. 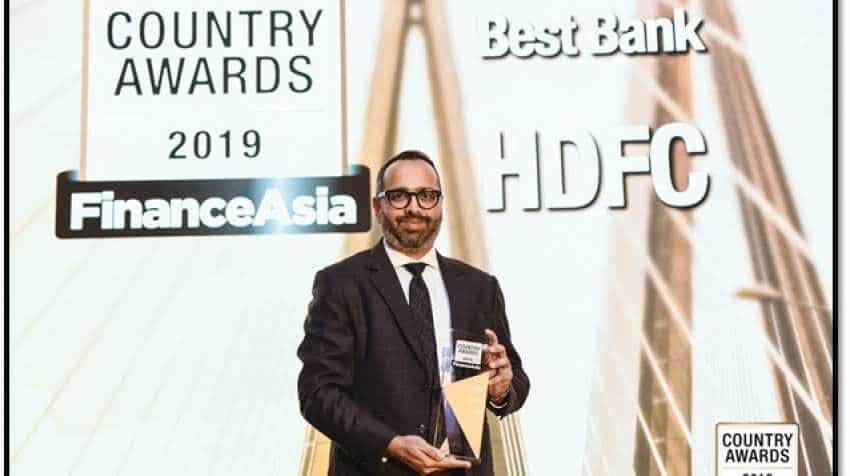 HDFC Bank is has been named as The 'Best Bank in India', by global magazine FinanceAsia. Photo: HDFC Bank

Private lender HDFC Bank is not only most loved by customers in India, but is also recognised globally as one of the best banks. In latest development, HDFC Bank is has been named as The 'Best Bank in India', by global magazine FinanceAsia. Last week, HDFC Bank was identified as the highest-ranked Indian brand to be featured in the BrandZ Top 100 Most Valuable Global Brands. In the FinanceAsia magazine, HDFC Bank was adjudged as India’s top bank at the publication’s Country Awards for Achievement 2019 for “maintaining an impressive growth trajectory and strong asset quality.”

In its editorial on the bank, FinanceAsia states, “HDFC (Bank)’s proven ability to balance growth with adequate controls is one of the main reasons why investors continue to rate the bank in the face of an aggressive expansion strategy. For the bank is using its highly regarded digital platform as a springboard to accelerate customer acquisition and production penetration.”

The magazine further wrote, “(HDFC Bank) is set to open more than double the 300 branches it rolled out during the 2019 financial year. Over the next few years, it also plans to expand its virtual relationship managers from 5.7 million to 20 million."

The FinanceAsia magazine delves into the bank’s recently launched a five-pillar programme to double branch level productivity, ramp up its presence in semi-urban and rural areas, extend its virtual relationship manager programme, enhance its payments leadership and accelerate digitisation.

FinanceAsia’s annual Country Awards for Achievement recognises outperforming banks from countries in the Asia Pacific region. The magazine bestows the recognition on the banks after taking into consideration their performance, vision, and long-term strategy.