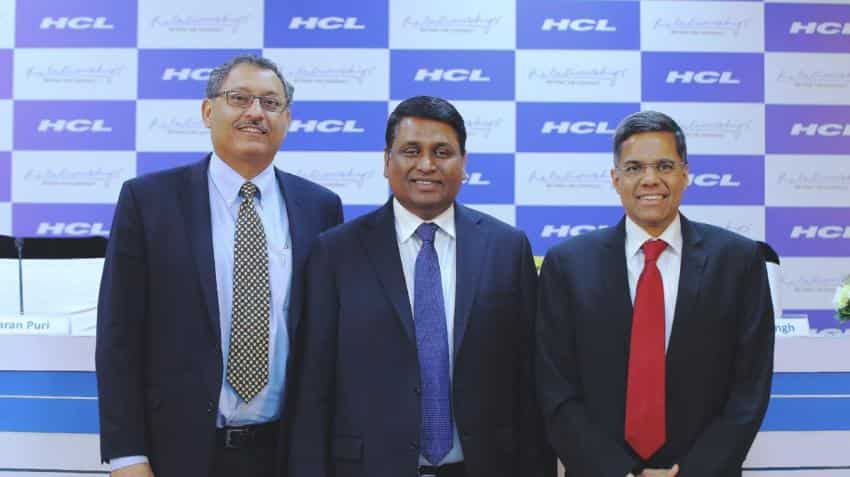 HCL Technologies president and chief executive officer C Vijayakumar said that the company has been applying for "less than 1,000 visas a year" on an average over the past three to four years. Image Source: Twitter
Written By: PTI
RELATED NEWS

HCL Technologies on Tuesday said it has "stepped up" efforts in the US for campus and entry-level hires to support growth in coming quarters even though a "very high percentage of employees" is already local hires.

There are concerns that the new government in the US, under Donald Trump, is likely to push for a stricter visa regime to curb "abuse" of H1-B and L1 visas used by foreign workers. Such a move will have a significant impact on Indian IT firms, which get about 60% of their revenues from the US.

"We have really looked at our current base of employees and looked at how local hiring can be ramped up... We are stepping up our campus and entry-level hiring in the US to support some of the growth that we will see in coming quarters," HCL Technologies President and CEO C Vijayakumar told reporters.

He added that the company has been applying for "less than 1,000 visas a year" on an average over the past three to four years.

"It has been coming down. Our strategy has been in all IT outsourcing deals, we re-badge a lot of people from our clients and we hire people from local geographies. So, that's why we have a very high percentage of our employees in the US who are local hires," he added.

While Vijayakumar did not disclose specific number of local hires, he said the company currently recruits over 55% local employees in the US.

Local hiring may result in lower operating margins as this increases operating costs.

HCL Technologies, however, did not provide guidance on the possible impact in case any adverse regulations are introduced.

In terms of revenue, it expects growth to be between 12-14% in constant dollar for the fiscal, based on 2015-16 currency rates.

About demand environment in the US, Vijayakumar said there is no reduction in spending or outsourcing that the company has seen yet.

"Intuitively, you will feel that they are cautious. But if you really see, no one has done anything different. They continue to do the same programmes, similar request for proposals (RFPs). Of course, there is a little more conversation on how much visa dependent are you, will you have an impact?" he said.

Vijayakumar said while there may be pros and cons of some of the decisions taken in the US, largely there will be a "business friendly" environment.