GST rates on television should be brought down to 18% from 28%: Atul B Lall, Dixon Technologies

Certain brands have performed well despite the slowdown, in fact, there is a brand-to-brand difference in sales performance, says Atul B Lall, Managing Director, Dixon Technologies (India) Limited, during an interview with Zee Business. 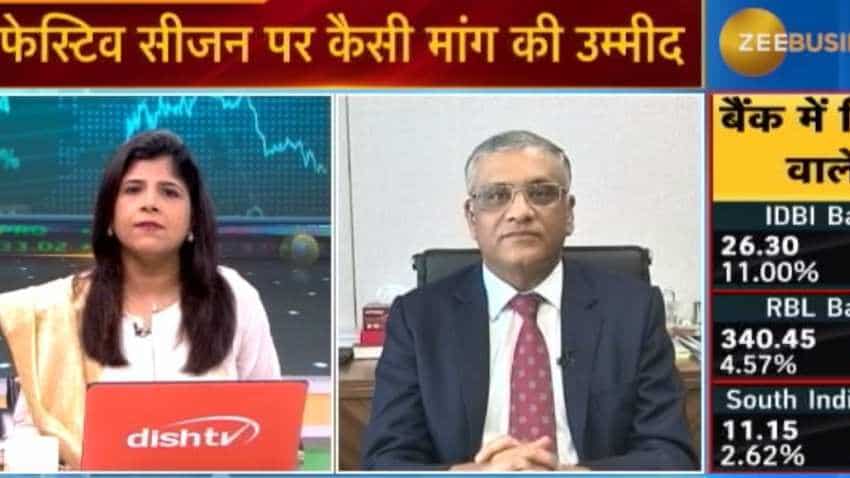 Certain brands have performed well despite the slowdown, in fact, there is a brand-to-brand difference in sales performance, says Atul B Lall, Managing Director, Dixon Technologies (India) Limited. During an interview with Swati Khandelwal, Zee Business, Mr Lall said, “the demand will go up during the upcoming festive season”. Edited Excerpts:

Q: Do you think that the booster package announced by the finance minister is enough to improve the conditions mainly in the context of demand? What are your expectations from the festive occasion that is about to start?
A: There was a slight slowdown, but some brands have performed well. There is a brand-to-brand difference in sales performance. The honourable finance minister has announced a package and I feel that further such announcements will be made in future. The announcement has come in the form of release of liquidity, bringing down the interest rates and support to the NBFC sector. I believe demand will go up in the coming festive season and there will be a price correction.

Q: What is your demand from the government about the slowdown in the area of consumption?
A: The finance minister in her last announcement has put liquidity in the NBFC sector. Availability of liquidity will encourage financing for consumer durable and these things will lead to an uptick in demand. We have certain products that come under the essential product segment like television above 32-inches, where GST of 28% is being slapped till date. I would like to request the honourable finance minister and the GST council to rationalize it and bring it down to 18%. During my previous interview to I said that our import duty on open cell, which is an essential input for television, should be brought down to zero from 5% because import from Vietnam and ASEAN countries is hurting to ‘Make in India’ program. So, these are certain issues like rationalization of GST and interest rate reduction, liquidity infusion and import duty correction among others will revive the industry and bring buoyancy and encourage demand.

Q: Dixon Technologies numbers have been remarkable in the June quarter as its profits have increased by 85% in the quarter. Do you think that the company will repeat the results in future quarters as well?
A: Yes, our growth has been good in the first quarter. Dixon is an outsourcing company and we design durable products and lighting products for other brands. Customer acquisition has always been our focus area and makes an effort to get a major share of the customers for whom we are manufacturing. The team has performed well in both things and this has resulted in such growth. EBITDA growth stands above 90%. As far as the margin is concerned then many things have an impact on the margin. I feel that the domains where margins have expanded like lighting, and we have achieved operating leverage in the domain. It is at a very big scale as we are engaged in manufacturing 35-40% LED indoor lighting of India. Scale has increased in even other products, but the operating leverage has not kicked in yet in those areas. I feel that it will happen in next one-two quarters and you will be able to see good margin improvement in Dixon’s performance.

Q: During our last conversation you said that soon a JV will be announced with a mobile company. Let us know the time by which the announcement will be made?
A: I think it will be disclosed in the next 2-3 weeks.

Q: Dixon Technologies is a diversified company that manufactures washing machine, television and LED lighting among others. Which segment will give you the maximum growth in the next 5 years?
A: On comparing India’s consumption story with China, we find that China’s demand is 5 times more than India’s demand because of low penetration level in India. So, I feel the growth story in India across all these verticals will be bullish. Several products like lighting and washing machine – for which a plant is being developed near Chennai airport – will be globally comparative and we will be able to generate demand from the international market. So, all these fields are high-growth areas and I am sure that Dixon’s growth story will remain good.

Q: You have expanded your capacity utilization in the semi-automatic washing machine to 100% and there are orders that you are not expecting new orders. Do you have any plans to expand your capacity?
A: Yes, we have a capacity of about 1 million semi-automatic washing machines, and it is completely utilized. We will set up a new plant in the next six months. The plant with a capacity of 6 lakh/annum will come up in Noida. So, the current situation where we are not able to execute orders will come into control. Apart from this, we will also set up a top-loading fully automatic plant in Tirupati, which will become functional in the first or second quarter of the next fiscal (FY21). So, our total combined capacity will increase to 2-2.2 million by next year, which is more than 30% of the total requirement of the country.

Q: What are your plans regarding the fully-automatic washing machine segment?
A: Several models are present in the bouquet like the capacity of touch, tech tile touch, front panel, rear panel, steel drum and heater among others. There are several features. It is a complete bouquet of top-loading. Just as our semi-automatic washing machine today has more than 140 models, similarly the top-loading fully automatic will also have a much larger range.