I expect that the budget will bring an improvement to the infrastructure sector, says Jagdish Prasad Chowdhary, Executive Chairman, Titagarh Wagons, during an interview with Zee Business. 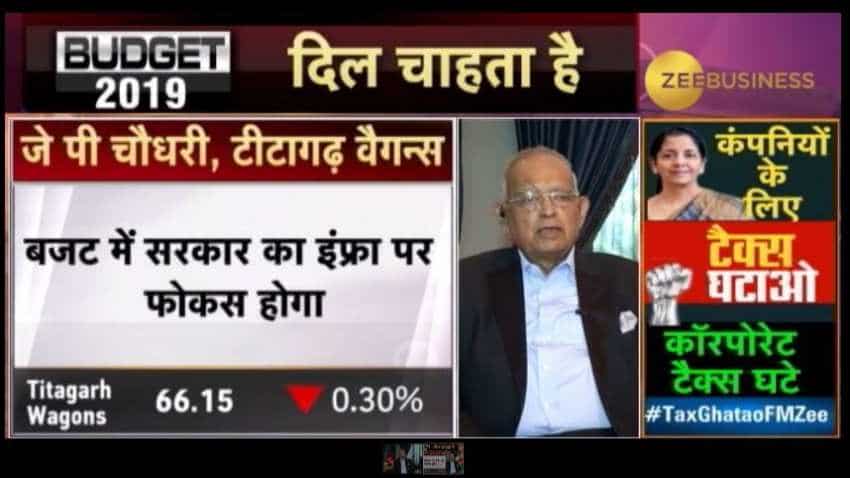 Chowdhary said the government in its next GST council meet should improve the GST rates in certain sectors, such as Railway Wagon, where it is negative due to unavailability of the input credit. Image source: Zee Business

I expect that the budget will bring an improvement to the infrastructure sector, says Jagdish Prasad Chowdhary, Executive Chairman, Titagarh Wagons. Chowdhary during an interview with Zee Business’s Pooja Tripathi said the government in its next GST council meet should improve the GST rates in certain sectors, such as Railway Wagon, where it is negative due to unavailability of the input credit. Excerpts:

Q: What are your expectations for the railway sector from the Union Budget 2019, which will be presented on July 5, 2019?
A: I feel, the budget will bring an improvement in the infrastructure sector. Although, the railway sector was quite ignored for past 3-4 years. However, huge demand has propped up in the last six months, mainly after Piyush Goyal took charge of the Railway Ministry. This demand will continue in future as well. There was a time when wagons were delayed to private companies but now, they can buy their own wagons. The advancement of the metro railways will also boost demand.

Secondly, our company is also into shipbuilding and I feel that there will be a very good demand in the segment. The defence demand - being made under Make in India - will also help us a lot. So, we hope that the budget is going to be a good one. But at the same time, I would like to attract the government’s attention towards certain things where GST rates are negative like on railway wagons and improve it during the next GST council meet. We don’t receive any input credit in the segment. I hope the government will have to look at it and bring an improvement in it.

Apart from this, I hope that the government will announce a good budget to support its pragmatic policies. Improved infrastructure will improve the economy of the country.

Q: Are you expecting any specific announcement related to wagon procurement from the government? Also, update us on your expansion strategy and the CapEx that will be needed for the purpose?
A: It is difficult to tell how much CapEx will be decided by the government as it is dependent on overall budgetary provisions. In addition, the ongoing demand of the railway wagons has increased the production in the last 2-3 months. Despite this, there is an increase in consumer demand and that is why I think that it will lead to good demand and it will be maintained, but it is difficult to quantify it.

Q: The government has plans to strengthen the Eastern and Western corridor by doubling the freight capacity. Are you expecting any order from it?
A: Several wagons being developed by us, Titagarh Wagons, will move to the dedicated freight corridor. It will be very helpful. In fact, improvement in railway transportation will boost its demand, which in turn will also improve its profitability. It will also decrease the fund shortage issues of railways.

Q: Has the legacy order issues related to the acquisition of Italy-based Firema Trasporti SpA, which was acquired in 2015, has ended, if yes, update us on the kind of turnaround or its contribution to your company?
A: The legacy orders can be termed as a part of the purchasing price. You will be happy to know that our legacy orders have been completed. Interestingly, the company’s this year performance has been better than the previous year and I hope that it will get better in future. Besides, we have also received an order of Rs1,700 crore from Catania Railway. Based on the same, we have started quoting for future tenders as well. Looking at everything, it seems that the Italian-unit will perform well.  However, we have faced certain problems in the French unit and that’s why we have to go for an overhaul of the local management of the unit. In fact, we along with the government have designed a restructuring scheme and the French government will be helping us in it and I hope that the scheme will be approved.

Q: What is your view on the synergies and benefits that will be created through the offer for sale (OFS) of Cimmco, which has received a great response?
A: The Board of Directors have met on Cimmco and decided to approach the government and the regulatory authority, SEBI, asking it to allow Cimmco’s merger in Titagarh, as the two companies share good synergies with each other. Interestingly, we will avoid duplication in it. Cimmco will be concentrated in specialised wagons, defence products, locomotive shells. On the other hand, we are building ships, wagons and defence work at Titagarh. Division of the work will help us in increasing our efficiency in coming time.