The existing regulation requires an Indian carrier to have a minimum five years of domestic flying experience and a fleet of at least 20 planes to fly overseas. 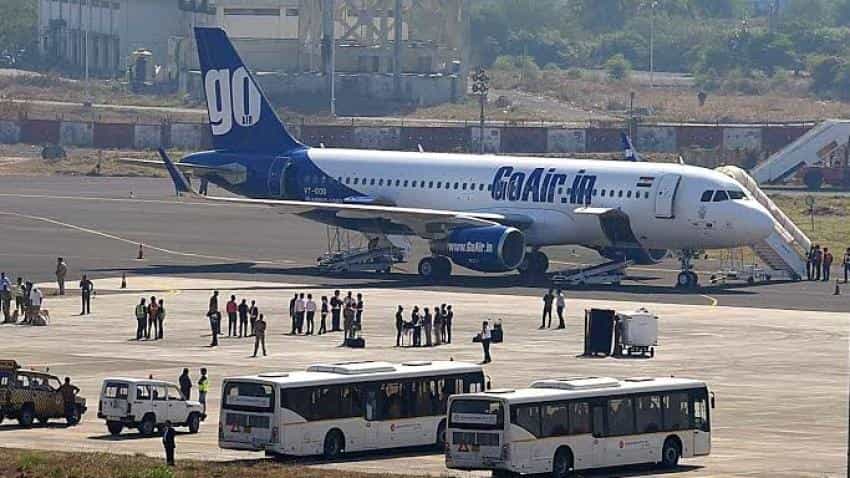 The airline decided not to accept the customary water canon salute to the new aircraft on its arrival. Photo: IANS
Written By: PTI
RELATED NEWS

Wadia group-promoted budget carrier GoAir on Thursday became eligible for international operations with the induction of its 20th aircraft in the fleet with the arrival of its first Airbus A320 neo plane at the Indira Gandhi international Airport here this morning.

GoAir has also became the second operator to have this latest fuel-efficient aircraft from the European aviation major, Airbus.

"GoAir is delighted to welcome A320neo (new engine option) into its fleet. With the induction of the first of our 72 NEO aircraft on order, we have reached a fleet strength of 20 aircraft," GoAir Chief Executive Officer Wolfgang Prock-Schauer said in a statement.

The airline in a gesture towards conserving water in the face of the drought in certain parts of the country, decided not to accept the customary water canon salute to the new aircraft on its arrival.

Globally, when an airline starts its operations to a particular airport or flies a new aircraft, a water canon welcome is given from two fire tenders when the plane lands at the destination airport. With this expansion GoAir will be able to strengthen its domestic network and will also be available to fly on international routes, he said.

The existing regulation requires an Indian carrier to have a minimum five years of domestic flying experience and a fleet of at least 20 planes to fly overseas.

GoAir, which commands 8.5% market share in domestic traffic, plans to induct as many as eight A320neo planes in the fleet by March next year, a senior GoAir official had said early this week.

The Mumbai-based airline had, in June 2011, placed order for 72 new A320 neo aircraft, valued at about Rs 32,400 crore on list price, with the European aviation major Airbus.

The A320neo incorporates a host of innovations, including latest generation engines and large Sharklet wing-tip devices, the statement said adding these allow for 15 percent in fuel savings from day one and 20% by 2020.

This is equivalent to a reduction of 5,000 tonnes of CO2 per aircraft per year, it added. According to the statement, GoAir is also the first airline to use this aircraft in Spaceflex configuration with 186 seats enabling better service and availability during peak seasons, without compromising on the comfort of the traveller.

The fleet enhancement is also expected to boost GoAir's plans to get listed on the bourses in the current fiscal.