General Motors dealers to face huge losses due the investment that they have put into the business and have been protesting due to the poor compensation. 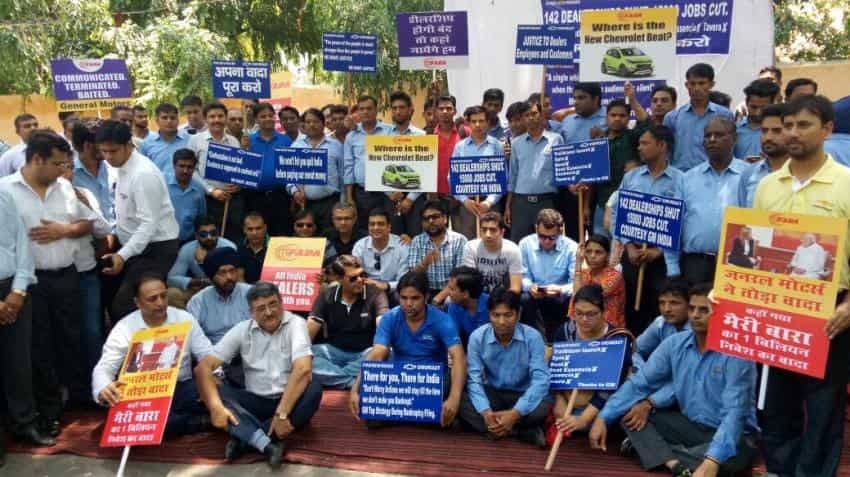 Trouble seems to brewing at General Motors (GM) who has left dealers fuming over the poor compensation package.

As a result, over 100 dealers protested against GM India yesterday and have even threatened to file a class action law suit against the company.

GM dealers are estimated to face a loss of Rs 5-7 crore and for some dealerships it may even go up to Rs 15 crore due to the company's decision to exit the market.

GM dealers say that company's compensation package they are offering them is far too less to cover these losses.

According to John Paul, President of Federation of Automobile Dealers Association (FADA) GM India has played the divide and rule game with their dealerships. “While they have offered a compensation package deal to dealers, it is not a common deal. They are individual deals to these dealerships. For instance, they have offered some of the big dealerships better compensation than the smaller ones. They have also have given a different deal for new dealerships and old dealers. In this way they are trying to create a divide between the dealerships,” said Paul.

Besides this, he said that GM is only repaying dealers 40% of the showroom infrastructure. That does not even cover the amount that these dealers must have paid for buying the property, let alone other investment they had put into it, he said.

"This compensation package they are offering dealers is like giving them peanuts. It is not even enough for the next seven months (till December 2017),” he said.

In fact, dealers says that the company has told them they will get the entire compensation package only after the stay open for operations till the end of December this year, when the GM will shut domestic operations in India.

ALSO READ: GM exits India: Are you a Chevrolet car owner? Find out what happens to your car's servicing

He further added, “Many of these dealers further invested into the business as they were promised by GM that there will be further investment into the Indian market leading to growth in its market share and the launch of new models ahead during this year. On that basis they signed an one-year extension of their contract. They earlier used to offer a three years contract.”

GM, during its announcement of its exit in India, said that it will honor all its commitments to customers, including after sales service agreements. It said that they will make spare parts for its cars available to Chevrolet customers.

Kaher Kazim, MD and President of GM India had then also said that their dealerships being an integral part of providing this after sales service to their customers.

However, with a large majority of the GM dealers being unhappy about the compensation package being offered, there is definitely going to be an impact on its after sales service which it promised its customers to offer despite their exit.

This commitment to honoring their promises would not hold if the GM dealers near your area won't service their customers as they do not spend more money into the business.

GM has 150 dealers in India totally.

When Zeebiz asked GM about the after sales service being impacted and several other regarding the dealers compensation package, the company said, "GM India is providing our dealer partners with a fair and transparent Transition Assistance Package based on a methodology that is consistent across all dealers. This has not changed. The methodology is then applied to the individual circumstances of each dealership. These discussions with individual dealers are confidential."